How Arkansas explains the politics of Obamacare

Share All sharing options for: How Arkansas explains the politics of Obamacare

Arkansas was a pioneer in crafting an "alternative" Medicaid expansion. Last September, the Obama administration signed off on their unprecedented proposal to move hundreds of thousands of newly-eligible people into the state's health insurance exchange, using Medicaid dollars to pay private premiums.

As the state's "private option" enters its second year, Arkansas is exploring possible changes to the program — ones that Republican-run states have already won approval for, and which could push the limits of how flexible the federal government will be with a program that covers some of the country's most vulnerable patients.

THE STATE EXPANDS THROUGH PRIVATE CHANNELS; MEDICAID PICKS UP THE BILL

Under the Arkansas "private option" design, almost everyone in Medicaid's expansion population is routed through the state insurance exchange, save for the medically frail, who remain in the traditional program. Medicaid pays for the  same plans — selected from the "silver" tier — as people with higher incomes who shop for private coverage. This appealed to conservatives because the state expands through private channels rather than through a public program, even though Medicaid still picks up the bill.

Earlier this week, the state proposed an amendment to their plan that would layer in additional conservative principles. These seem to be largely borrowed from other state efforts to custom-order Medicaid expansions.

The first new feature, "independence accounts," would require monthly contributions from enrollees living above 50 percent of the poverty line (about $5,800 for an individual). The precise amount would vary by income, but ranges from $5 to $25. These funds would be used to cover deductibles, co-pays, and related costs.

Michigan and Indiana have both proposed similar cost-sharing schemes; the federal government has approved Michigan's plan while Indiana is still in negotiations.

The hitch that Arkansas could run into is on enforcement: the federal government has been reluctant to let states enforce severe penalties, like taking away Medicaid coverage, when enrollees don't make nominal payments. The Arkansas plan says that noncompliance would result in debt accruing to the state, but it's unclear whether there would be active collection efforts.

The state also wants to restrict the use of non-emergency medical transportation. Under traditional Medicaid, enrollees can typically request assistance getting to and from medical appointments, and the program will cover the cost. The low-income populations eligible for Medicaid may not have access to a reliable source of transportation, a problem that can be especially pronounced in rural regions — like Arkansas — that lack a robust public transit system.

But this type of transportation isn't something that traditional insurers, like the ones offering coverage through Arkansas's "private option" are accustomed to providing. As a result, the state needs to find another way to offer wrap these benefits around the private plan, adding a layer of complexity to the coverage.

Iowa was the first state to broach limiting non-emergency transportation for their Medicaid expansion population; the federal government fully waived the requirement under expansion for one year.

STATES ARE STILL FIGURING OUT HOW FAR THE ADMINISTRATION WILL BEND.

Arkansas's proposal is less extreme: they want to limit coverage for this kind of transportation to 8 "legs," or 4 round-trips, per beneficiary annually. People who are medically frail — and thus in need of more medical services — won't be subject to this restriction, because the state keeps them in the traditional Medicaid program rather than enrolling them through the private option.

"Traditionally, there's a bright line between what Medicaid is and what benefits it provides, compared to private insurance on the exchanges," says Matt Salo, executive director of the National Association of Medicaid Directors. "Arkansas is trying to smooth out that bright line."

This is part of a bigger picture

Conservative states are still figuring out just how far the administration will bend in allowing states to expand Medicaid on their own terms.

"Where the administration is willing to go and what they're willing to approve has been evolving," Salo says. He credited Arkansas as the state that created a "middle path" between expanding and not expanding the public insurance program. Since their waiver was approved, the feds have demonstrated similar flexibility with other states. 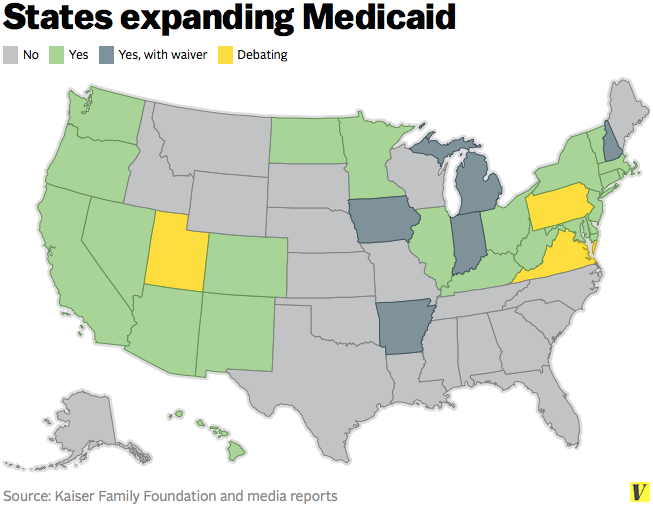 States in blue are expanding under waiver, like Arkansas. Indiana is still refining the terms of their expansion.

"where the administration is willing to go has been evolving."

HHS did rebuff at least one proposal, when Tom Corbett, Pennsylvania's governor, expressed interest in tying Medicaid benefits to employment and job search efforts. That was nixed early on, and Corbett has since reoriented his negotiations.

The states are still figuring a lot of this out, too. Salo thinks that we're going to see a lot more of this as holdout states wobble on whether or not to expand.

"States that haven't expanded yet are trying to figure out ‘where are we politically?' As this whole process plays out, waiver states are literally defining the world as they go, and other states are going to say 'You know what, that looks like something we could do.'"

There's something that's important to remember as we observe the rollout of "alternative" Medicaid expansions: expansion was never conceived as something that would be optional when the health law was drafted. HHS hadn't prepared for negotiating the "terms" of expansion. So, in some ways, the government is making it up as they go.

"One of the fascinating things about this whole discussion is that this is really iterative, Salo said. "When the Supreme Court first came out and said that Medicaid expansion, as written, was unconstitutional, it set off a million and one questions about what that means."

Those questions are still being answered.