Share All sharing options for: We have Ebola in the US but Africa remains most at risk

Last spring, most people would have guessed that this Ebola outbreak in West Africa would be over by the end of summer. Yet, nine months on, we're in the midst of the deadliest outbreak in history, and one that has defied the odds: it has lasted longer, killed more, and spread further than any previous outbreak. For the first time ever, an Ebola case has been diagnosed outside of Africa in the US. Right now, many are worried about where Ebola will turn up next.

Where the outbreak is occurring now

To understand where Ebola will spread, we need to look at where Ebola is occurring now. In December, the virus is believed to have first showed up in a two-year-old boy in a village in Guéckédou, southeastern Guinea. That geography was unfortunate: Guéckédou happens to share a very porous border with Sierra Leone and Liberia, where people travel in and out every day to go to the market or conduct business.

By the time the Ebola outbreak was identified in March, it had already spread to all three countries along the border.

And it continues to spread further: In July, a Liberian-American got on a plane bound for Nigeria, bringing the virus with him and spurring 20 cases and eight deaths in Africa's most populous country. Soon, another case turned up in Senegal.

On September 30, the first-ever case was diagnosed in Dallas, Texas. There is also an unrelated outbreak of Ebola in the Democratic Republic of the Congo involving a different type of the virus right now. That's seven countries hit with Ebola in one year.

The situations in Senegal and Nigeria have since stabilized, but the outbreak continues to rage on in West Africa. So the burden of the disease is still in Sierra Leone, Guinea and Liberia right now.


Where Ebola will go next

There have been suspected Ebola cases in Europe and Asia but none were confirmed. The only Ebola-positive patient to show up outside of Africa so far has been the Texas case.

As the death toll continues to rise in Africa, public health officials are increasingly worried about the virus spreading further. But the main concern remains spread within Africa, where outbreaks persist because there's poor sanitation and a shortage of resources to contain them.

"Our first concern is that this is going to go into adjacent areas through people traveling in the region," said Daniel Bausch, associate professor at the Tulane University School of Public Health and Tropical Medicine, who is working with the WHO and MSF on the outbreak. "In the short term, the main vector is the traveler: local people traveling from one village to the next, on more regional scale, plane travelers."

This pie chart shows the final destinations of travelers originating in the three countries currently most affected by Ebola. As you can see, travel from Sierra Leone, Guinea and Liberia within the continent is much more prevalent than travel elsewhere. 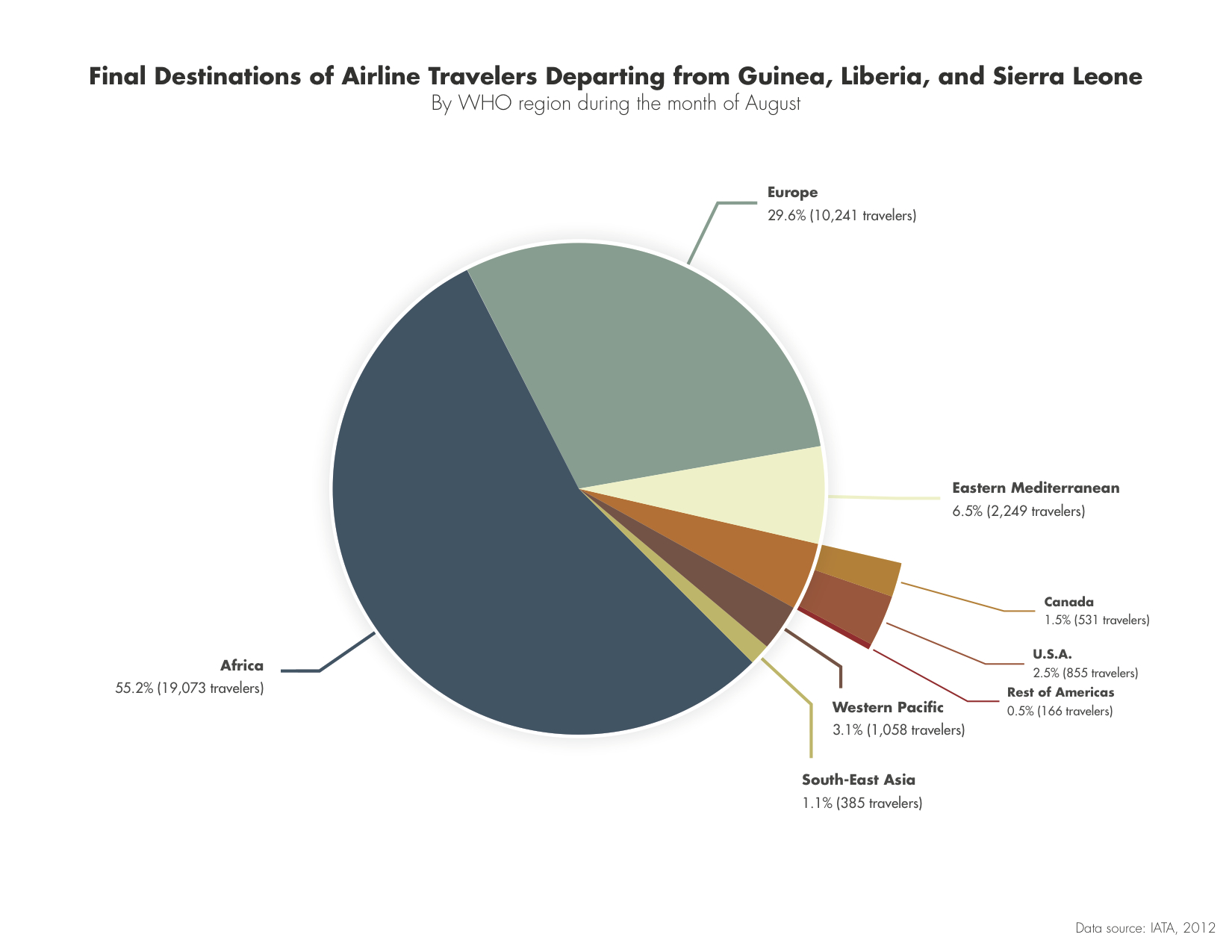 All countries in West Africa are already on alert. National authorities in Ghana, Nigeria, Togo and the Côte d'Ivoire have been working with the WHO on prevention efforts and monitoring potential cases.

To do this, contact tracing is essential, said Bausch. "With Ebola outbreaks, most of the time there's one or very few introductions of the virus from the wild into humans, and all the transmission after that is human-to-human transmission. So people who are traveling locally as well as on planes and other modes of transport, that's the way this would get around."

These efforts helped Nigeria stop the disease from turning into a full-scale outbreak, and they're being used by the CDC to make sure the Texas case is contained. As the New York Times reports:

After the first patient — a dying Liberian-American — flew into Lagos on July 20, Ebola spread to 20 other people there and in a smaller city, Port Harcourt.

They have all now died or recovered, and the cure rate — 60 percent — was unusually high for an African outbreak.

Meanwhile, local health workers paid 18,500 face-to-face visits to repeatedly take the temperatures of nearly 900 people who had contact with them. The last confirmed case was detected Aug. 31, and virtually all contacts have passed the 21-day incubation period without falling ill.

Even if the outbreak didn't move across any other country border, intensification within the already affected areas is the most immediate health threat.

"The worst-case scenario is that the disease will continue to bubble on, like a persistent bushfire, never quite doused out," said Derek Gatherer, a Lancaster University bioinformatician who has studied the evolution of this Ebola outbreak. "It may start to approach endemic status in some of the worst affected regions. This would have very debilitating effects on the economies of the affected countries and West Africa in general."

"Ebola may start to approach endemic status in some of the worst affected regions."

There are several predictions for potential cases being floating around. The World Health Organization projects that 20,000 people will be infected in November. HeathMap put the number at about 14,000 if there's no improvement in the situation.

But there are fears that the supplies and health-care workers needed to bend the curve downward and save lives won't reach Africa quickly enough. Doctors need to be trained. Hospitals need to be built. Many suspect that there has been widespread under-reporting of actual Ebola cases, since people have been turned away from overflowing hospitals and others have been hiding in their homes, afraid that coming out with Ebola will mean they never see their families again or that they are ostracized by their neighbors.

Assuming the worst is true, the CDC has a much bigger projection for this epidemic: up to 1.4 million people infected by January.


This dire situation could come about because of a "persistent failure of current efforts," Gatherer added. "Previous successful eradication of Ebola outbreaks have been via swamping the areas with medical staff and essentially cutting the transmission chains. Doing that here is going to be very difficult and expensive. We have little option other than to pump in resources and engage with the problem using the tried-and-tested strategy — but on a scale previously unused."

Ebola doesn't spread quickly, and it hasn't mutated to become more transmissible over the years. "The good news is that Ebola has a lower reproductive rate than measles in the pre-vaccination days or the Spanish flu," wrote a mathematical epidemiologist who studies Ebola in the Washington Post. He found that each Ebola case produces between 1.3 and 1.8 secondary cases. Compare that with measles, which creates 17 secondary cases. Since about two weeks pass between the first Ebola case and secondary cases, it allows time for people to protect themselves.

But again, in areas where resources are already extremely constrained, it's difficult to mount the measures necessary to stop secondary spread. And that's the case in the countries affected right now. As Dr. Bausch said, "If you're in a hospital in Sierra Leone or Guinea, it might not be unusual to say, 'I need gloves to examine this patient,' and have someone tell you, 'We don't have gloves in the hospital today,' or 'We're out of clean needles,' — all the sorts of things you need to protect against Ebola."

In these situations, local health-care workers — the ones most impacted by the disease — start to get scared and walk off the job. And the situation worsens.

He'd walk into the hospital in the morning and find patients on the floor in pools of vomit, blood, and stool. They had fallen out of their beds during the night, and they were delirious. "What should happen is that a nursing staff or sanitation officer would come and decontaminate the area," he said. "But when you don't have that support, obviously it gets more dangerous." Without strong local health systems in place, diseases like Ebola spread: mostly within Africa, sadly, and then sometimes further.