Share All sharing options for: The carbon dioxide trapped in your meeting is making you think more slowly

If, after sitting for hours in a stuffy, crowded meeting room or classroom, you've found yourself thinking a little more slowly than usual, it may not have been your imagination.

An emerging body of research is indicating that the high levels of carbon dioxide and other indoor pollutants that we face in poorly ventilated rooms reduces our cognitive performance and decision-making ability.

A study published in 2012 by researchers at the Lawrence Berkeley National Laboratory found that levels of carbon dioxide commonly found in crowded rooms decreased people's performance on decision-making tests, and ongoing work at that and other labs has found that many other volatile organic compounds (VOCs) — emitted in slight quantities by building materials and even personal care products — also play a role.

"I see this as a significant issue," says William Fisk, the researcher who's led much of the work. "And for carbon dioxide in particular, it's been really surprising to see such a strong detrimental effect."

All this research is in its early stages, and other labs are still checking to see if it can be consistently replicated. But a growing amount of evidence suggests that poor ventilation may be affecting the thinking skills of students and office workers to a far greater degree than previously thought.

What researchers thought they knew about indoor pollutants 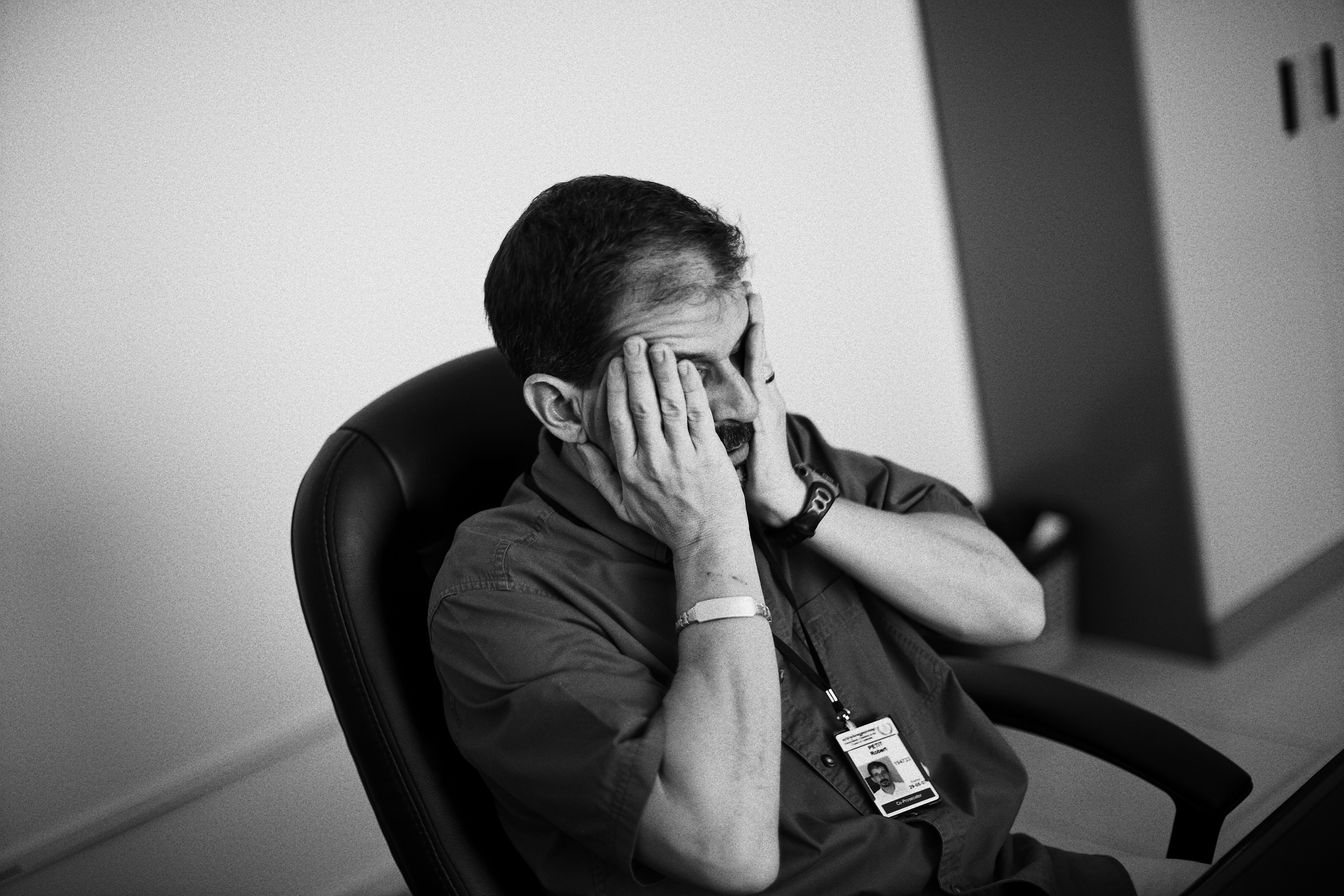 Over the past few decades, a number of different studies have shown that in indoor spaces with poor ventilation, people's cognitive abilities — whether office workers' ability to proofread and add numbers or call center workers' performance on talking tasks — suffer.

Initially, researchers blamed VOCs or other pollutants. "We've known for a long time that higher carbon dioxide levels were statistically correlated with reduced performance," Fisk says. "But we assumed it was a proxy for other pollutants that varied with ventilation rates. That's basically been the dogma."

It's well-known that carbon dioxide can cause detrimental physical effects at extremely high levels: at 100,000 parts per million, for instance, it can cause unconsciousness, and even higher levels can lead to death. But no one had specifically considered the effect of carbon dioxide at high but environmentally relevant levels — say, 3,000 ppm, a concentration frequently found in crowded places like elementary school classrooms.

That changed with a small study published in 2012 by researchers from Budapest University of Technology and Economics. They found spending a few hours in a chamber with carbon dioxide concentrations elevated to 3,000 ppm made it more difficult for people to concentrate. "That really caught our attention," Fisk says.

How carbon dioxide may affect thinking and decision making

The study led Fisk and other Berkeley lab scientists to conduct research evaluating how a few different carbon dioxide concentrations — 600, 1,000, and 2,500 ppm — affected decision-making. Working with Usha Satish, a psychiatry researcher at SUNY Upstate Medical University, they put 22 participants in an office-sized chamber and subjected them to each of the three carbon dioxide concentrations for 2.5 hours each.

They also had the participants take something called the Strategic Management Simulation, a test that gives people hypothetical scenarios and asks them to plan an appropriate response, then grades them in a variety of factors: basic activity, applied activity, focused activity, task orientation, initiative, information orientation, information usage, breadth of approach and strategy. The idea is that this sort of test, which considers more complex thinking skills, is more of a realistic indicator of a person's workplace productivity than, say, proofreading or arithmetic ability.

Satish had previously used this test to measure the effect of things like prescription drugs and alcohol — and she and the other researchers were surprised to find that the impact of 2,500 parts per million of carbon dioxide was roughly equivalent to a .08 blood alcohol concentration, the legal limit for driving in most states. 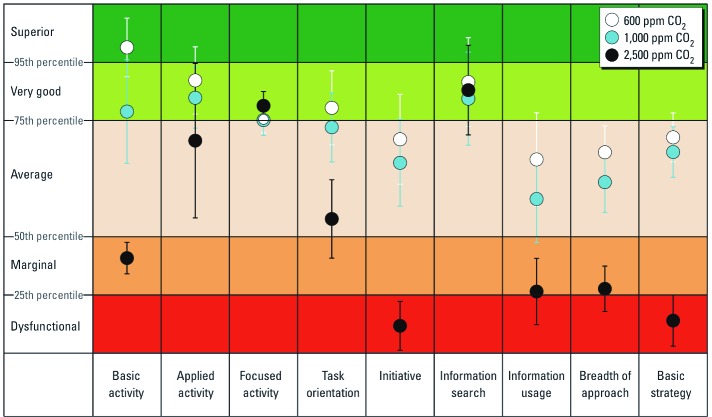 How common is 2,500 parts per million carbon dioxide in the real world? Levels in the majority of offices, Fisk says, are generally below 1,000 parts per million, but he's found that in a crowded conference room, concentrations can climb quickly and break through this threshold within a half hour or so. He's especially concerned about schools: one survey, for instance, found that 21 percent of elementary schools in Texas had carbon dioxide concentrations above 3,000 ppm.

Now, Fisk and the other researchers caution that these findings need to be replicated. Both this and the Hungary study both had small sample sizes, and looked at the effects of carbon dioxide at lower levels that no one ever had before. But if ongoing replication projects elsewhere do show the same results, this could be a very legitimate real-world problem, impacting office workers' ability to think clearly during long, stuffy meetings and students' ability to learn and perform to their full potential on tests.

How other indoor pollutants may impact our thinking too 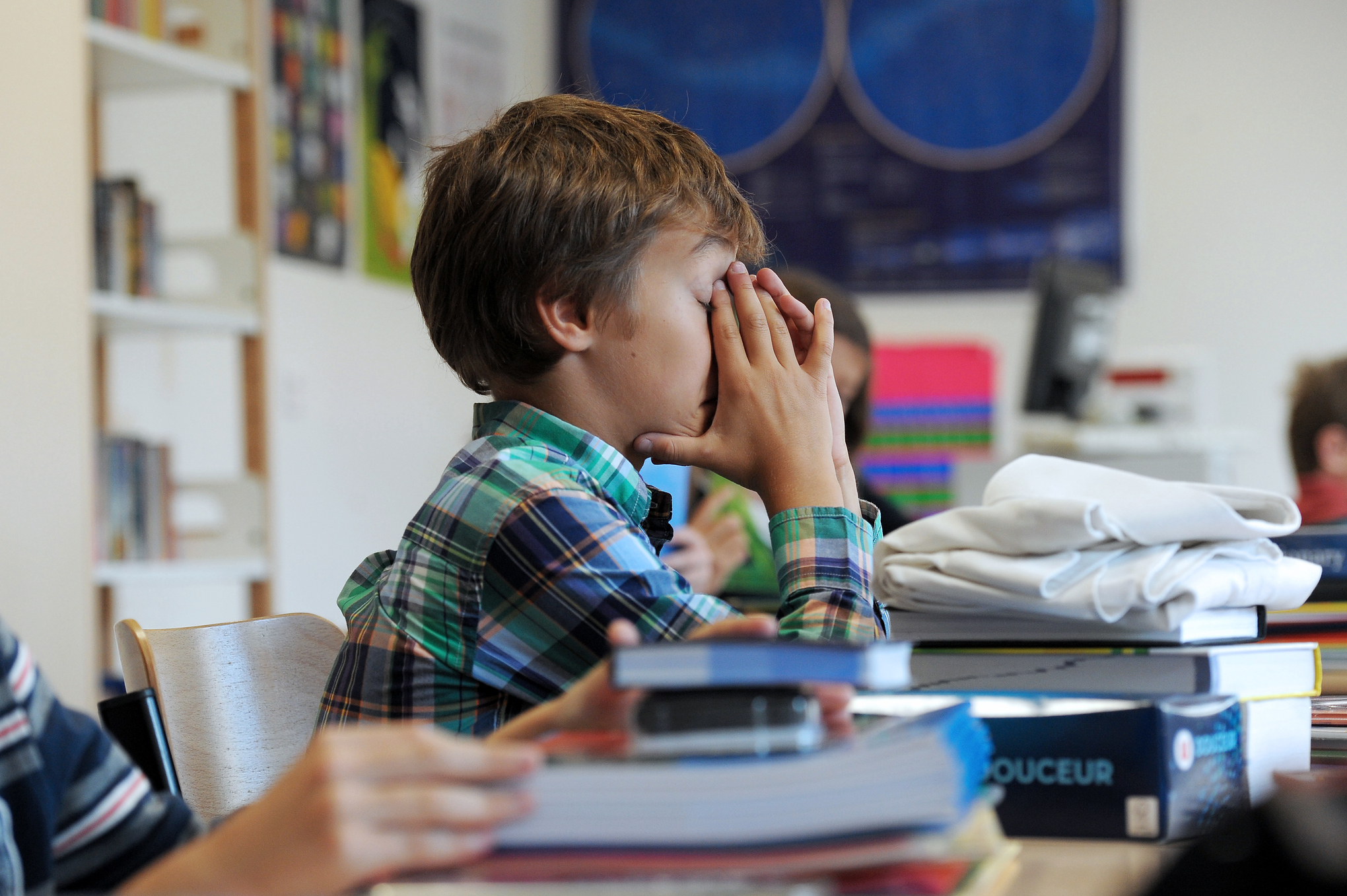 All this research, though, doesn't let VOCs off the hook. Like carbon dioxide, it's long been known that they cause physiological problems at higher levels, and recent work by these scientists and others has found that at lower thresholds, they likely affect decision-making as well.

VOCs can come from a number of different sources. For the first few days after paint is applied, it emits slightly higher levels of them, and Satish has found that putting people in a freshly painted room causes their performance on the same test to diminish as well. VOCs can also be emitted by building materials — again in highest quantities when buildings are new — and potentially by computers and other electronics.

"For our latest study, which we haven't yet published, we had levels of organic pollutants that would be relatively typical of an office that had been renovated within the past year or so," Fisk says. "And again, we saw cognitive declines."

Other experiments at Berkeley have even raised the possibility that VOCs emitted in slight amounts by people's clothing and personal care products like shampoo and perfume may affect cognitive performance. In one study, Fisk and other researchers varied the chamber's ventilation rate per person — which would affect not only carbon dioxide levels, but the levels of VOCs emitted by individual people — and found greater declines in performance than with carbon dioxide alone elevated.

One thing that's unclear, though, is which types of VOCs are most important. In most scenarios, they individually exist at very low levels, and researchers hypothesize it may be the combination of different VOCs that affect thinking skills, but it still needs to be tested.

What can be done to improve indoor air quality

For both carbon dioxide and VOCs, there are regulations in place that govern indoor air quality — but in both cases, they're aimed at preventing the much higher concentrations of the pollutants known to cause physiological problems, rather than these lower levels that may simply cause us to think a bit more slowly.

Fisk, for one, thinks that stricter indoor air quality regulations, in terms of ventilation, are merited. But even beyond that, he says, enlightened architects and engineers need to prioritize indoor air quality if they want to put students or workers in a position to succeed.

"Codes need to be in place, and they need to be enforced," he says. "And people who design buildings need to have the awareness to construct ones that are healthier for people to spend time in. To really solve the problem, all parties need to be involved."

Of course, most of us aren't architects: we're the people who spend so much time sitting in stuffy workspaces and classrooms. In the meantime, we may not be able to redesign these buildings — but the next time you're part of a stuffy, unproductive meeting that's dragging on endlessly, you can use all this research as a great reason to end it.