Share All sharing options for: Guardians of the Galaxy's massive success means Marvel doesn't have to play by the rules

The dust has finally settled on what was an excellent weekend for Marvel. Guardians of the Galaxy, a film based on a comic that didn't have the hype or cultural relevance of bigger franchises like The Avengers, Captain America, or Iron Man, cashed in a $94 million opening weekend.

That's bigger than The Amazing Spider-Man 2 and X-Men: Days of Future Past, and just behind Captain America: Winter Soldier — confirmation that Marvel has the capability of giving viewers as good a space movie as the rebooted Star Trek franchise, but also that the studio is nimble enough to serve comedy.

So what's next for Marvel?

Guardians bucked a trend. The way the comic-movie relationship is supposed to work is that the source material (a Superman comic, say) is so popular and culturally relevant that the film coasts on that momentum. In the case of The Avengers, the movie had the buzz of the comics, yes, but it also built on the hype of the films that preceded it, because fans were excited for the moment when all the heroes would meet.

Drax, Gamora, Groot, Rocket, and Star-Lord didn't have the mass appeal of their Marvel colleagues. The Guardians were a completely different group of heroes back in 1969, when Marvel first came up with the concept. And the Guardians we know today were actually brought together in 2008 (though the characters existed independently before that), an off-shoot of a Marvel crossover event called Annihilation: Conquest

That book enjoyed loyal readership, but its numbers were small and the book was eventually canceled in 2010 — around the time whispers of a movie started cropping up. The comic was rebooted in March of 2013, a few months after Marvel announced the movie at Comic Con in 2012, and the sales skyrocketed: 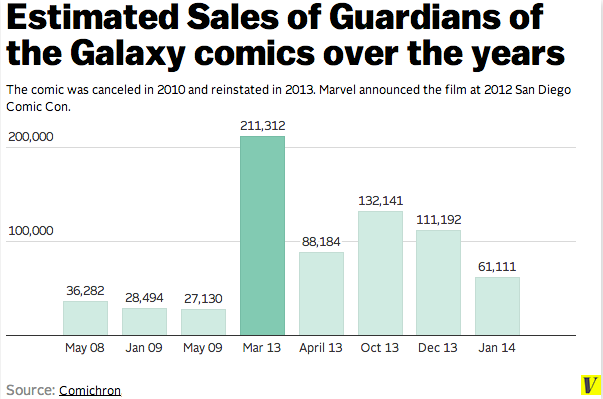 The numbers you want to pay attention to are, of course, that huge March when the title was relaunched and revamped. But the huge numbers from October and December are also noteworthy, because buyers were buying multiple issues (i.e. at least 50,000 each of issue #7 and #8). You'll also notice that Guardians is now selling much more than it did before the movie was announced.

The Avengers, Superman, and Batman taught us that comics dictate what movies you make. Guardians showed us that isn't the case, and that Marvel has the ability to dictate which comic books you buy, based on the movies it makes. (This obviously means that the studio should double-down on a Squirrel Girl movie.)

This should give Marvel a ton of confidence to experiment

In a sense, Marvel is working with a freedom its biggest rivals don't have. It doesn't need a recognizable name or people to be familiar with its source material to turn out a $94 million blockbuster. The company doesn't have to keep plucking stories from its A-list.

The inevitable question is: Will it?

There's a sense that the studio is willing to play with the weird. There are constant rumors about a Dr. Strange movie, which would deal with magic and some weird villains (crossing my fingers for a Shuma Gorath appearance). And it's also looking to add to its "normal" superhero world with (the semi-weird) Ant Man, starring Paul Rudd.

But the most interesting stuff in Marvel's war chest is its space stuff.

There are several hints in Guardians that Marvel will continue to build out its space universe. The Collector (Benicio Del Toro), Nova Prime (Glenn Close), and Thanos (Josh Brolin) all had relatively small roles. But they could be the kind of characters that could — and in Thanos's case, will — make appearances in future movies.

Marvel also subtly introduced a couple of different alien races in Guardians. Ronan the Accuser, the main villain, is Kree, an alien race that is prominently featured in the comics universe. And Star Lord (spoiler warning) is part Spartoi, another important alien race. If Marvel wants to delve into these stories in a Guardians-of-the-Galaxy-Starlord-finds-out-who-he-is type of movie, it has already laid the foundation.

But there are other ways for the studio to experiment.

What about a villain?

It's a little bit surprising that Marvel hasn't played with giving Loki (Tom Hiddleston) his own movie. Hiddleston is fantastic, and his Loki has stolen the show away from the bulging muscle paladin that is Chris Hemsworth. And Loki's appearances in the comics are also well-developed, fun, and occasionally heart-breaking.

I've always held the belief that in the great battle between Marvel and DC, DC had the upper hand with more compelling villains (see: Joker, Catwoman, Two-Face, Poison Ivy) and Marvel held the edge with more interesting heroes (the X-Men, the Avengers, Spider-Man). There are, of course, outliers. DC's Batman is exponentially cooler than Marvel's Wolverine, and Marvel's Magneto is more charismatic than DC's Penguin. But the point is Marvel finally has a villain that's as good as Jack Nicholson and Heath Ledger's Joker or Michelle Pfeiffer's Catwoman. The studio hasn't given him a movie. And it should. 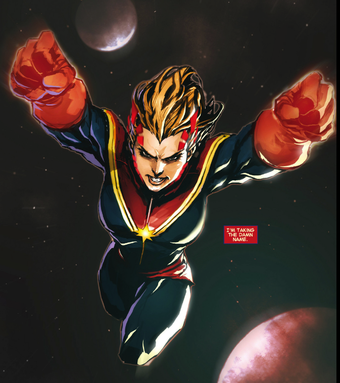 One of the loudest and most frustrating conversations surrounding comic book blockbusters is the lack of female superhero movies from DC and Marvel. Sony announced this week that they had plans for a Marvel movie about a female superhero — the first since (the awful) Elektra, some nine years ago.

But Sony's stable of superheroines isn't as developed as Fox's or Marvel Studios' stables are. Fox has the rights to X-Women like Storm and Emma Frost, who have really rich stories and powers that translate well to the silver screen. And Marvel has Black-Widow, She-Hulk, and maybe Spider-Woman (depending on how the rights shake out), who all currently have their own solo books.

But the hero that fans are really amped about and want to see in the movies is Captain Marvel (a.k.a. Carol Danvers, formerly known as Ms. Marvel).

While she isn't featured in the Avengers movie, Captain Marvel has been an integral member of The Avengers in the comics. The brilliant Kelly Sue DeConnick has written the Air force pilot-turned-superhero Danvers into a badass (yet imperfect) leader of the Avengers and a feminist icon. DeConnick was there when Carol changed her superhero name to Captain, and traded in her skimpy outfit for a more modest captain's uniform. She also packs the same kind of punch (thanks to photon beams, super strength, superhuman durability, and flight at the speed of sound) as heavy hitters like Captain America and Iron Man.

And in the comic community, there's a movement called the Carol Corps, primarily made up of women (though men are fully welcomed as Carol Corps members) who absolutely adore the character and everything she represents.

Captain Marvel, if Marvel wants her to, could have a Katniss-like effect on the superhero industry. But will she?

There's enough to keep writers, filmmakers, and producers busy until 2017. We know that an Ant-Man movie is coming out next year, along with the Avengers sequel, and that there have been talks about a Dr. Strange movie, likely to debut in 2016. There is the Netflix deal that will bring Luke Cage, Iron Fist, Daredevil and Jessica Jones to life. And the Guardians sequel is coming out in 2017.

If those projects are like what Marvel has shown us in the last three years, chances are they're going to range from good to great. But what we've learned from Guardians is that Marvel is infinitely more fun when it's breaking the rules and surprising us. Let's hope it finds new ways to do so.