Share All sharing options for: Here's the resignation letter of a British official who quit over 'morally indefensible' Gaza policy

Baroness Sayeeda Warsi, a Conservative life peer and senior minister of state at the United Kingdom Foreign Office, resigned her spot in the government in protest over the UK's "morally indefensible" policy on the Israel-Gaza conflict. Her resignation letter is public, and posted below.

The UK public has a dim view of Israel generally: in a 2014 BBC poll, 72 percent of Britons said that Israel has a "mainly negative" influence on the world.

Despite that, Prime Minister David Cameron has been on balance supportive of Israel's offensive in Gaza. "This crisis was triggered by Hamas raining hundreds of rockets on Israeli cities, indiscriminately targeting civilians in contravention of all humanitarian law and norms," Cameron said in a July 21st statement. "I have been clear throughout this crisis that Israel has the right to defend itself."

The leader of the opposition, Labour MP Ed Miliband, has recently hit Cameron pretty hard for the premier's "silence on the killing of innocent Palestinian civilians caused by Israel's military action." Afterwords, Cameron stepped up his own criticism of the Gaza offensive, focusing on Israel's shelling of schools. So Warsi's protest resignation today comes at a time when the prime minister is already feeling serious pressure over the Gaza war.

In her letter, the Baroness — who worked on international law and human rights issues — wrote that her government's approach to Gaza "is morally indefensible, is not in Britain's national interest and will have a long term detrimental impact on our reputation internationally and domestically." In a follow-up interview with the Huffington Post, she used harsher language, saying, "it appalls me that the British government continues to allow the sale of weapons to a country, Israel, that has killed almost 2,000 people, including hundreds of kids, in the past four weeks alone." Here's the full letter: 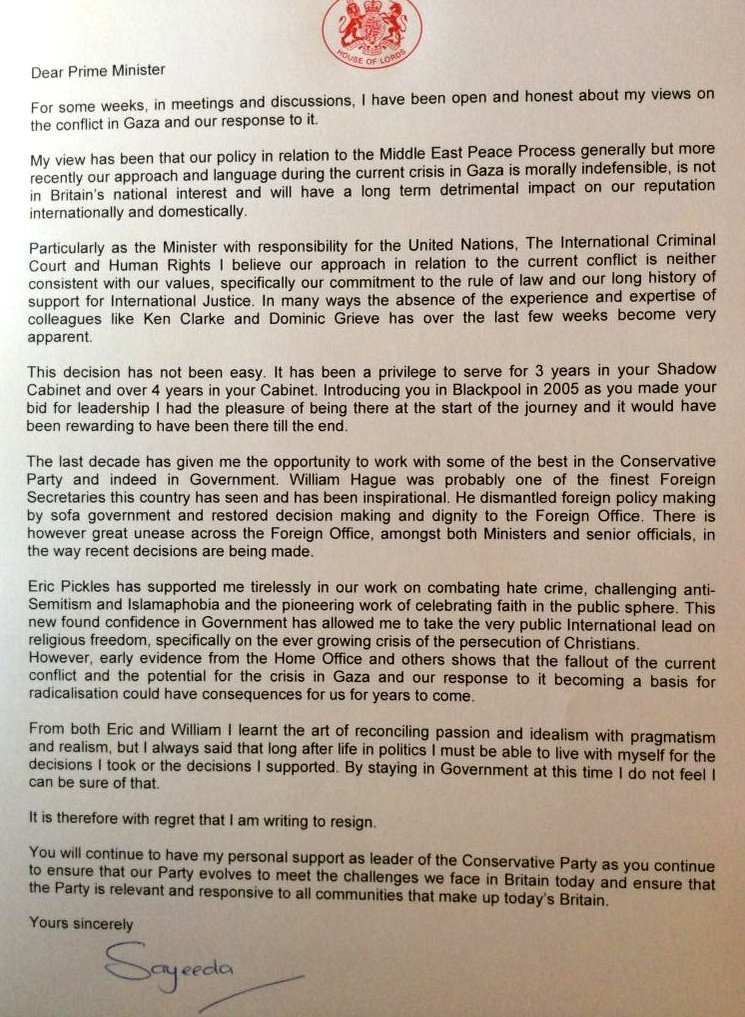