Map: Every call Obama has made to a foreign leader in 2014

Share All sharing options for: Map: Every call Obama has made to a foreign leader in 2014

What foreign leaders has Obama spoken to this year? Reddit user nyshtick combed through official White House press releases to make this map showing every phone call Obama has made in 2014 to another head of state or head of government. The results are revealing, a great little window into the year in American foreign policy so far: 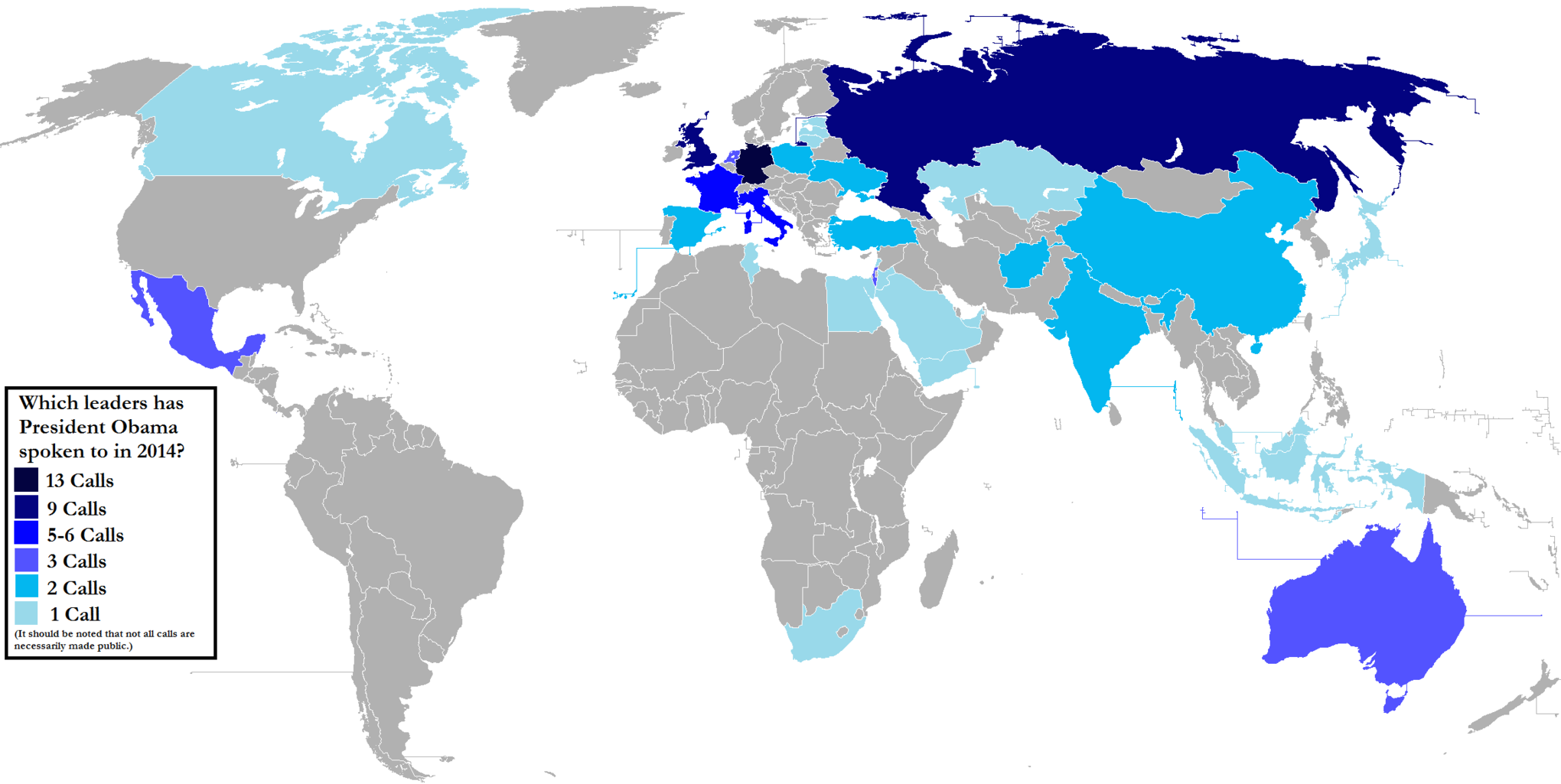 The most significant detail here is Europe: Obama's phone calls in 2014 have been overwhelmingly with European leaders. This just goes to show how much the Ukraine crisis has come to dominate US foreign policy this year.

Tellingly, the foreign leader whom Obama has called most frequently is, by far, German Chancellor Angela Merkel. That may surprise you — US-German relations are probably not the first topic that comes to mind when you think about US foreign policy — but it makes sense given the Ukraine crisis. The German leader is the most influential figure within the European Union, and the EU is the body with the most power to help Ukraine and to punish Russia for its role in the crisis.

The EU, and Merkel in particular, have been pretty reluctant to step up, given that sanctioning Russia would hurt their own economies, so one of the best things Obama can do is a lot of hand-holding with EU leaders like Merkel. That helps explain why so much of Western Europe is darkly colored here. Some of those calls with Merkel and other EU leaders were also probably about the NSA revelations, which included some embarrassing US spying programs on European allies. Europe's ongoing economic woes likely also played a big role in Obama's frequent transatlantic calls. 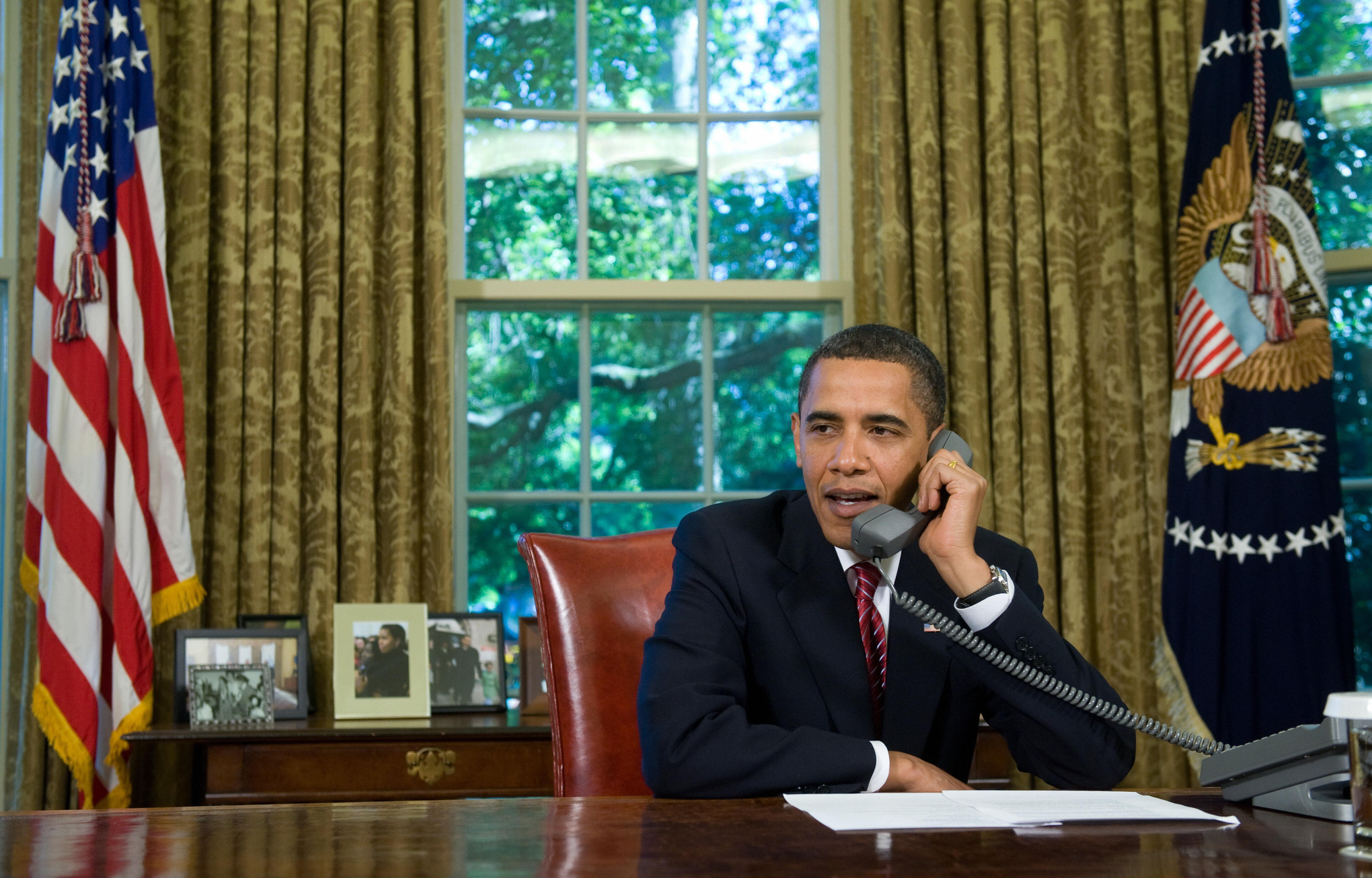 Statistically speaking, it's probably Angela Merkel on the other end. (SAUL LOEB/AFP/Getty Images)

The other countries that got a lot of calls were Australia, with which the US is cooperating on Pacific security issues; Mexico, with which the US is regularly discussing the ongoing child migrant crisis and other issues; and Israel, which the US has been working with on peace negotiations with the Palestinian Authority and pushing to scale back in its Gaza campaign.

Maybe just as significant here is what's not colored: Middle Eastern or east Asian countries. (The calls Obama did make to those countries were often about anodyne issues, e.g. "Congratulations on holding an election.") There's long been the sense in Washington foreign policy circles that Obama's planned "pivot to Asia," toward east Asia and away from Middle Eastern issues, has been stalled by Middle Eastern conflicts. There's a lot of truth to that. But this map suggests that Obama's foreign policy has been pulled to a surprising degree by, of all places Europe.

That doesn't mean the US isn't focusing a great deal on the Middle East in other ways. Secretary of State John Kerry seems to travel there every other week, and most US foreign policy in the region is just conducted less directly than with a presidential phone call, and Obama's willingness to call Europe is probably in part a function of the fact that those relationships are largely cordial. But Obama's phone records at least suggest a pull toward Europe that American foreign policy hands might not have anticipated a year ago.