When health care prices stop being hidden, and start getting real

Share All sharing options for: When health care prices stop being hidden, and start getting real

That lack of transparency in health prices partially explains why there is huge variation in what doctors charge for the exact same service. An appendectomy can cost anywhere between $15,000 and $186,000. Doctors don't usually feel the need to make their prices competitive when shoppers can't see them.

Over the past two years the Blue Cross and Blue Shield health plans have been running a quiet experiment, to see what would happen if prices became available in some cities but not others. And they found that just the act of making prices available can have a really dramatic impact on what they had to spend to get patients a very basic procedure.

How much is that MRI in the window?

For the experiment, the Blue Cross Blue Shield plans used a very standard procedure, an MRI scan, where there's little (if any) variation in quality from one provider to another.

In St. Louis and Atlanta, for example, patients would be told how much an MRI would cost at different providers. But in Chicago and Kansas City they wouldn't get that information; they would go about setting up an MRI at their facility of choice, without any data on price. 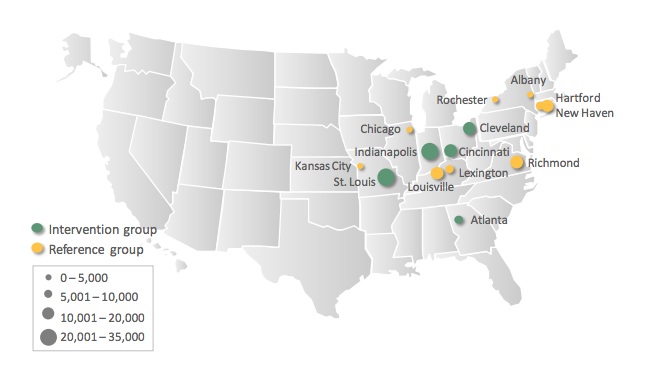 In the cities where price data was available, there was no penalty for choosing the higher-priced option; consumers weren't told they couldn't go get scanned in the more expensive MRI machine.

But just providing the data proved to be powerful: in the course of two years, the average price per MRI fell by $95, according to data published in the journal Health Affairs. Prices at hospitals that didn't post charges rose by $124.

This was mostly the product of consumers shifting their business to the less expensive MRI options, rather than the prices falling.

The transparency did, however, reduce variation in prices. Hospitals, for example, typically charge more for MRI scans than imaging that happens in a doctor's office or free-standing center. But in the intervention cities, they started lowering their prices to be more similar to the doctor office MRIs — while doctor offices inched their prices upwards a bit towards the hospital rates. All together, price variation fell by 30 percent in the intervention cities.

This new research suggests that for a very standard, simple imaging procedure like an MRI — one where there is little difference between the quality of different providers — transparency can be powerful. Prices do influence where people seek their health care, once their made available.

Whether this type of transparency would work for more complicated procedures — a bypass surgery, for example, or knee replacement — is hard to know. Those are situations where patients might want more data about quality, and rightly so.

But for imaging scans like MRIs providing prices seems like a no-brainer way to cut health care costs without any negative impact on patients.