Share All sharing options for: Entrepreneurship is on the decline in America — but it will turn around soon

It's well-known that the US population is aging as the large Baby Boom generation shuffles off to retirement. Less well-known is that corporate America is aging as well.

Ian Hathaway and Robert Litan find overwhelming evidence that this is the case in a new study for the Brookings Institution: The share of companies that are more than 15 years old has increased dramatically since the early 1990s.

The authors also find that the trend "is occurring in every US state and nearly every metropolitan area, across all firm size categories and broad industrial segments; even in high tech." 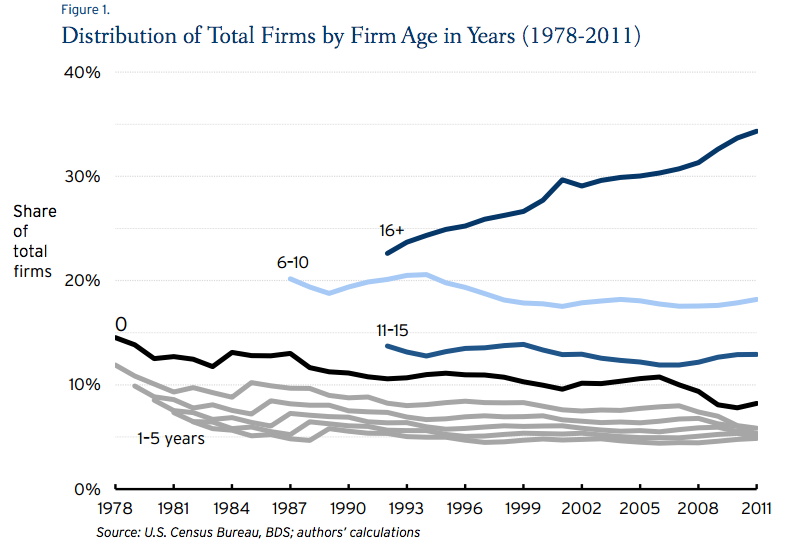 A common response to an earlier iteration of this line of research was to speculate that the apparent decline in the dynamism of American businesses really just reflected the decline of the mom and pop retail sector. But the trend is much more widespread than that.

What Litan and Hathaway don't have, however, is much in the way of a theory of why this is happening. They show that people are founding fewer new businesses. But why?

One possibility is that the link to population aging is quite literal. A study by Vivek Wadhwa, Raj Aggarwal, Krisztina Holly, and Alex Salkever that looked specifically at "high-growth" industries found that the typical successful founder is 40. Not someone who's at the tail-end of his career, but not someone who's fresh out of school either. That's in part because "professional networks were important to the success of their current business for 73 percent of the entrepreneur," and it takes time to achieve that success. Mark Zuckerberg founded a great company when he was in college, but that kind of super-young founder is the exception not the rule — most people need some practical experience and contacts to succeed.

And back in the early 1990s, there were a lot of people in their late-thirties and early forties: 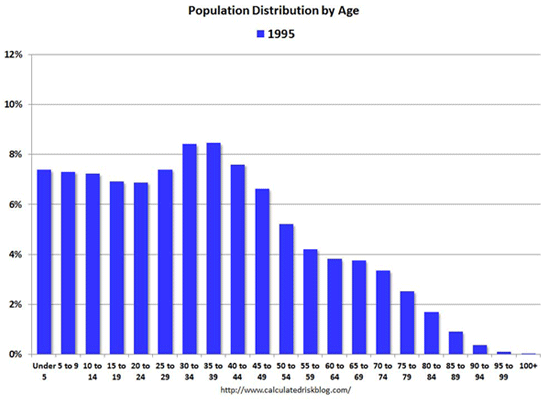 Nowadays that cohort of people's prime founding years are behind them. There is another large cohort of people coming up, but right now they're too young to be peak entrepreneurs. This cool CNN graphic shows that the most common age in the United States right now is 22 and 23, and that's followed by 53 and 52.

The story about aging is so well-known that people tend to neglect this sub-trend of the youth bulge. But right now we're at a moment where a lot of inexperienced workers are entering the labor market, and 10 to 20 years from now we'll be in a moment when a lot of experienced workers are founding new businesses. But for the past 10 years, we've been seeing a demographic trend that's unfavorable to entrepreneurship.