Ceasefire in Gaza: Why Hamas and Israel may finally be ready to stop fighting

Share All sharing options for: Ceasefire in Gaza: Why Hamas and Israel may finally be ready to stop fighting

At 1 a.m. Eastern on Tuesday morning, a 72 hour ceasefire, brokered by Egypt, took hold in Gaza. It's not the first temporary ceasefire in the ongoing Gaza war, or even the first time that both parties have agreed to a 72-hour ceasefire (the last one collapsed almost immediately). But Israel has pulled all of its troops out of Gaza, and the ceasefire appears to be holding. Hamas and Israel will now engage in indirect, Egyptian-mediated talks over the terms of a permanent ceasefire. It's the closest we've been to an end to the fighting since Israel's ground invasion of Gaza began.

Why does it feel like the end might finally be in sight? It's impossible to say for sure, but a big possible explanation is that both sides have gotten the minimum of what what they wanted out of the war. Israel has done serious damage to Hamas' tunnel network and demonstrated, again, that Hamas can't launch rockets without paying a serious price. And Hamas has plausibly won a political victory, one that may allow them to get some much-needed concessions from Israel and Egypt.

Israel may have neutralized the tunnel threat and slowed rocket fire 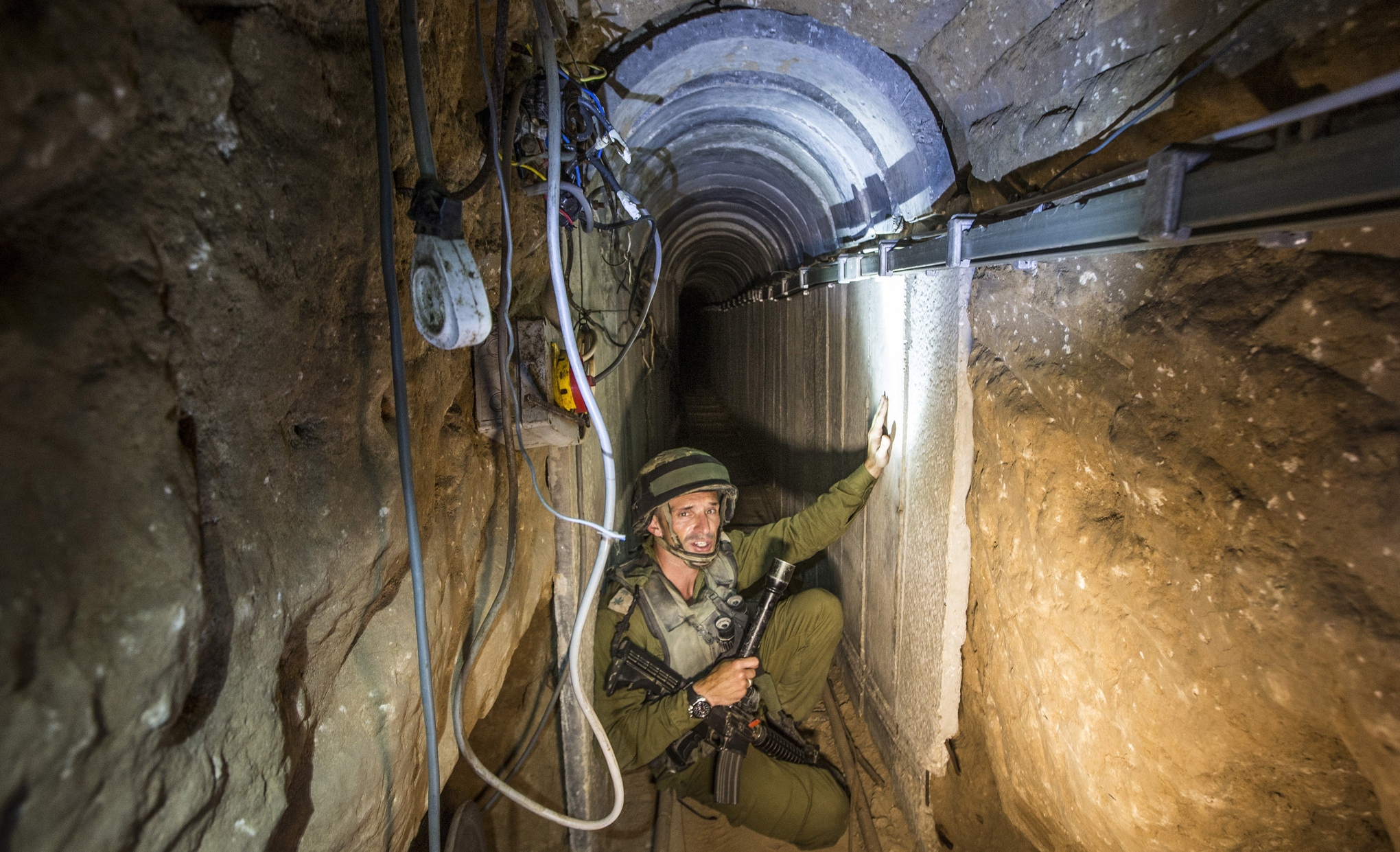 Israel was very up-front about the primary goal of its ground offensive: destroy Hamas tunnels into Israel. It's very close to having accomplished that: Israel says that it has destroyed the tunnel network, presumably meaning all of the tunnels. Indeed, Israel is so confident that it's telling evacuated Israelis who live in the south near Gaza to return to their homes because the tunnel threat has been "neutralized."

From Israel's perspective, that's a big win. Israel learned during the war that Hamas' tunnels were dramatically more numerous and sophisticated than they'd thought before. Some of the tunnels popped up near Israeli civilian communities, opening up Israel to the type of suicide bombing and shooting attacks Israeli border defenses had cut down on. Eliminating these tunnels thus means shutting down a major threat to Israeli civilians.

But the war isn't just about tunnels. According to Brent Sasley, a Professor of the University of Texas-Arlington, Israel wants "quiet." He argues that Israel would actually tolerate a number of rockets out of Gaza, so long as those rockets are not from Hamas. "They don't cause any damage, certainly don't kill any Israelis, and there's nothing else that requires a bigger response," he told me.

Israel's strategy for creating that quiet is called "mowing the grass." It's a pretty creepy term, as it implies that periodically killing people is the same as keeping your lawn groomed. But the point of the metaphor is that Hamas is like grass: you can't eliminate it, but you need to attack it regularly to keep it manageable.

This means regular attacks designed to destroy Hamas' military infrastructure and deter Hamas from major escalations in the near term. Israeli Prime Minister Benjamin Netanyahu and his advisors seem to have concluded they've done enough damage to restore quiet for the foreseeable future. 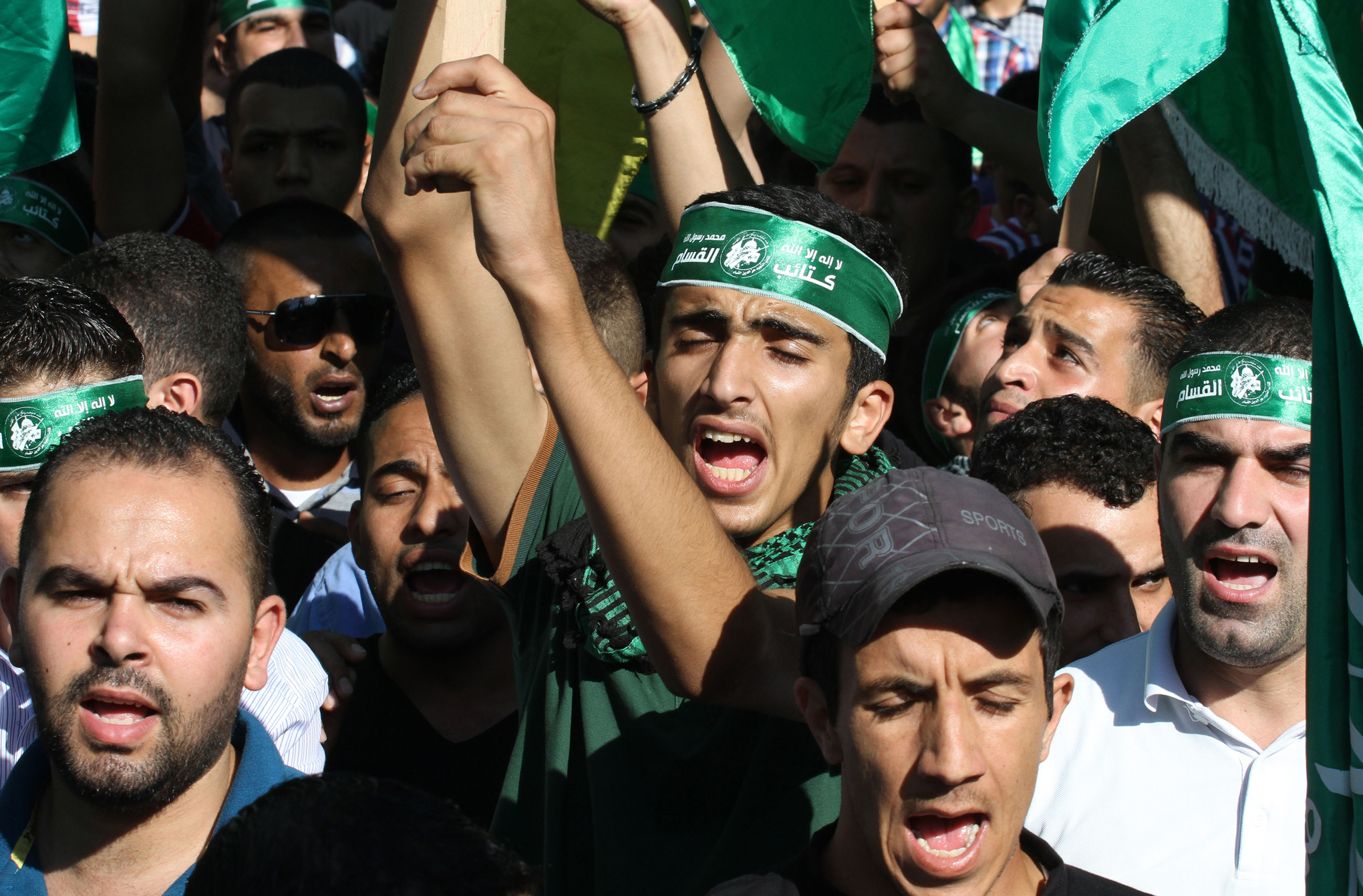 A July 31 rally organized by Hamas in Nablus, a city in the West Bank. Nedal Eshtahyah/Anadolu Agency/Getty Images

In a recent interview with Charlie Rose, Hamas leader Khaled Meshaal said that the war sends a message that "it is high time to lift the siege on Gaza." Simple enough: Hamas wants Israel to end its blockade of the Gaza Strip. Hamas has been badly undersupplied ever since Egypt, whose government deeply mistrusts Hamas, destroyed the bulk of its supply tunnels under the Egyptian border. Those tunnels also supplied Gazan civilians, who are in a dire situation.

The Israeli blockade likely won't end entirely, but Israel may abate it somewhat as part of a ceasefire. "Israeli officials across the political spectrum have begun to admit privately that the previous policy towards Gaza was a mistake," Nathan Thrall, a senior analyst at the International Crisis group, writes. "All parties involved in mediating a ceasefire envision postwar arrangements that effectively strengthen the new Palestinian government and its role in Gaza — and by extension Gaza itself."

Moreover, Hamas may be in a position to win some partial concessions from Egypt during the Cairo ceasefire negotiations. According to Hussein Ibish, a senior fellow at the American Task Force on Palestine, Hamas is "hoping to get Rafah [the border crossing between Gaza and Egypt] open, and they're hoping to get the Egyptians to allow the transfer of Qatari and other money, which the Egyptians have been blocking." Getting a lifeline out of Gaza that Israel doesn't control would be a big deal for Hamas, as it would allow them to at least somewhat circumvent the Israeli blockade, no matter how much Israel tightens it.

But why is Hamas ready to negotiate for these concessions now? It seems, quite simply, that Hamas has likely determined it has nothing more to gain from the conflict. In purely tactical terms, Hamas is losing the war. The militant group is performing better than it has in past wars with Israel, but the IDF is doing way more damage to Hamas' warfighting capabilities than Hamas is doing to Israel's.

However, Hamas may well have gotten a significant political boost from the fighting. Before the war, Hamas was in a a bad way politically. "Hamas's recent troubles that compelled its leadership to seek a unity government with [Palestinian Authority President Mahmoud] Abbas are a function of two factors," Council on Foreign Relations Senior Fellow Steven Cook writes. Those factors are "political changes in Egypt that have made it difficult for Hamas to raise revenue through the taxation of smuggled goods and importantly, two years of relative quiet in Gaza that has forced Hamas to govern, which apparently it does quite badly."

Now, according to Cook, "Hamas is in much better shape than it was when its leaders reluctantly sought a lifeline from Abbas and the PA." The war "has only burnished its nationalist credentials, established that it cannot be defeated, and that it has a reservoir [of] international support." Hamas comes out of this war, it seems, with much more public support among Palestinians than it started with. And, at least nominally, Palestinian elections are supposed to be held in the next several months.

Quitting the conflict now, in other words, may allow Hamas to escape further military losses and simultaneously emerge with a political victory.

To be clear, this does not mean that either Israel or Hamas has "won," and you'll note that neither side seems to be basing its political calculus very much on the needs of Palestinian civilians, who have born the overwhelming brunt of the conflict. Nor has either side accomplished anything that will prevent another round of fighting — much as the 2009 Gaza war didn't stop the 2012 war, and the 2012 war didn't prevent this one. This is all about tactical victory in a conflict seemingly without end.