We're finally getting a movie about a female Marvel superhero

Share All sharing options for: We're finally getting a movie about a female Marvel superhero

For the last couple of years or so, fans have been asking, even imploring, Marvel or DC to create a female-led superhero movie. And on Monday, those pleas were answered.

Sony announced that it had already cobbled together a screenwriter and producers for an unnamed, superheroine Marvel project that will be released in 2017. "Which characters they will develop is up for speculation, but we know that Lisa Joy Nolan (Westworld, Reminiscence) has been hired to script and that again [Avi] Arad and [Matt] Tolmach are producing," Deadline reported.

A few thoughts on this exciting news:

Which characters does Sony own? 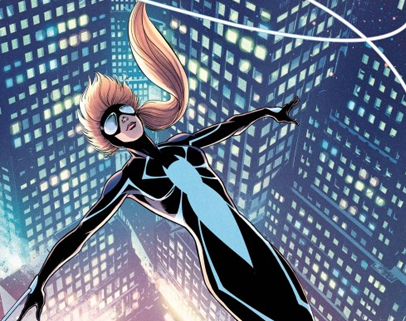 This is the most important question. Currently, Marvel's rich characters are divided between Sony, Fox, and Marvel Studios/Disney. Sony owns characters in Spider-Man canon, while Fox owns people who appear in either the X-Men or Fantastic Four source material. Marvel owns the rest.

In plain English: Sony's pool of characters is a bit limited, and it doesn't have access to Marvel's A-List female characters like Captain Marvel, Black Widow, Storm, or Emma Frost— other studios have those rights.

Here's a small list of supheroines they have to choose from:

Sony announced this big news on the heels of Guardians of the Galaxy's $94 million opening weekend. Of course, there is some gamesmanship there and Sony was capitalizing on the excitement that Guardians whipped up. But it could also be a sign that Sony is taking a page out of Guardians' playbook and hitting people with something they've never seen before.

Further, this female superhero buzz also comes in the wake of Sony's Comic-Con news. The company announced last month that it was delaying Amazing Spider-Man 3 (the sequel's box office numbers were mildly disappointing) until 2018. Monday's superheroine news is the most exciting news for Sony in a while.

Fans know this better than anyone.

That's why at comic convention after comic convention, fans ask Marvel and DC's presidents and VPs when a female superhero movie is going to get made. This past Friday, Marvel Studios President Kevin Feige danced around that question.

"I hope we do it sooner rather than later. But we find ourselves in the very strange position of managing more franchises than most people have, which is a very, very good thing and we don't take for granted, but is a challenging thing," Feige told Comic Book Resources.

Granted, there's a lot of time between now and 2017. And Sony has to produce something good. It can't just sit on its laurels by being the first studio to make a female Marvel superhero movie in recent years. After all, what movies like Frozen, Guardians, X-Men: Days of Future Past, and Captain America: The Winter Soldier have in common is that they, at their core, are all very good movies.