Share All sharing options for: One chart that explains Beyonce's elevator math

When extremely rich people are in an elevator, sometimes insane things happen. At least that's what Beyoncé implied in the remix of "Flawless" released in August.

In the remix, she sings:

We escalatin', up in this bitch like elevators
Of course sometimes shit goes down when there's a billion dollars on an elevator

The lyrics are in reference to the famed Elevator Incident of 2014, when Beyoncé's younger sister, singer Solange Knowles, attempted to thrash Jay-Z in an elevator after the Met Ball. This is one of the first acknowledgements of the incident from camp Beyoncé, but instead of pointing out who is to blame for the altercation, which was famously captured on leaked security footage, it points out who has money.

But was there really $1 billion on that elevator? 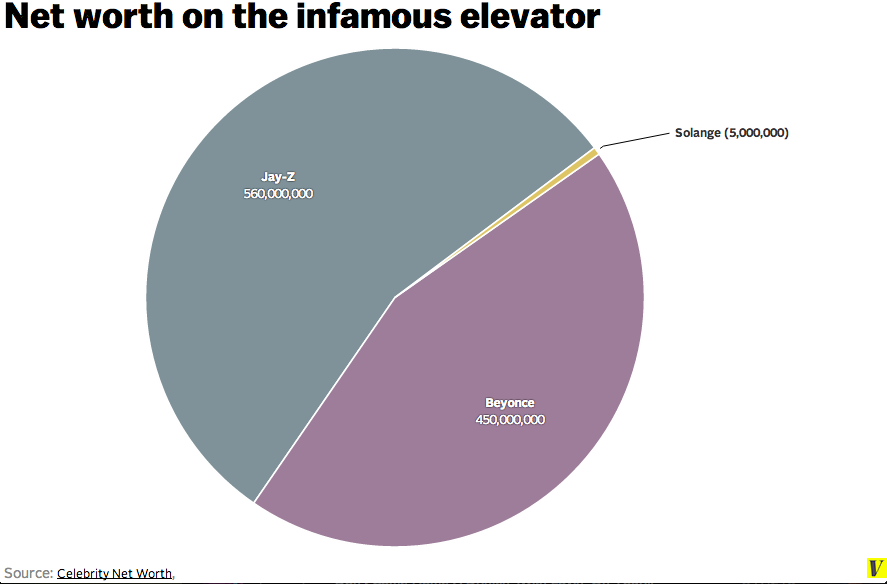 There was, in fact, more than $1 billion in net worth on that elevator. While Beyoncé and Jay-Z together have a net worth of $1,010,000,000, Solange is worth $5 million. This chart does not include the net worth of Beyoncé's bodyguard, who also played a part in the elevator drama.

You can listen to the song here: