An Israeli web poll asks what Obama should get for his birthday. 48 percent say "ebola."

Share All sharing options for: An Israeli web poll asks what Obama should get for his birthday. 48 percent say "ebola."

From the outside of the US-Israel alliance, it can look like the countries are so close that they are practically extensions of one another. From within, though, the relationship is a good deal more complex. One of the complexities that gets overlooked: Israelis get that the US is a crucial backer, but they sure don't trust President Obama.

That came through in a recent reader poll on the popular Israeli news and entertainment site Mako, which asked readers what Obama should get for his 53rd birthday, on Monday. By far the most popular choice is "An envelope of the ebola virus," which has tracked about 50 percent of votes since the poll went up.

Here is the poll and the results as of noon on Monday, with our English translations pasted over in red. 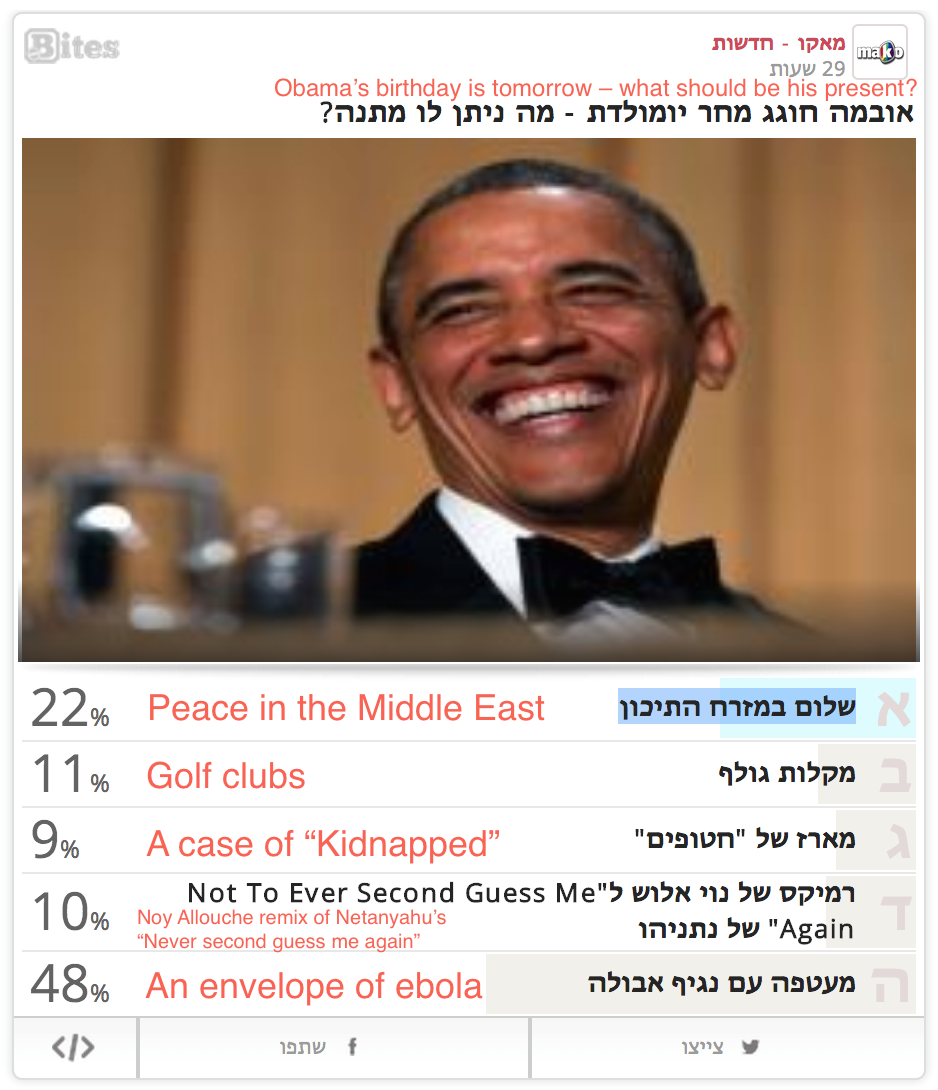 "Kidnapped" is the name of a popular Israeli TV show, on which the Obama-approved American show "Homeland" is based. Noy Allouche is an Israeli who does funny, musical YouTube remixes of speeches; this is a reference to Prime Minister Benjamin Netanyahu allegedly telling the US not to "ever second guess me again" on combatting Hamas.

Big caveat: these results are of course far from statistically rigorous, and while Mako is very popular it's not clear how many people participated. But Israeli distrust of Obama, and the perception that he is secretly hostile to Israel despite all of his government's overt support for the country, is pretty well established in actually scientific surveys.

In February, for example, an Israeli poll found that 70 percent of Jewish Israelis "do not trust Obama to safeguard their nation's vital interests in negotiations with the Palestinians." A March 2013 poll found that only 10 percent view him favorably, only a third believe he is supportive of Israel, and 38 percent say he is hostile to Israel. A separate poll that same month found that 36 percent believe Obama is more pro-Palestinian than pro-Israeli, 26 percent say he is more pro-Israeli than pro-Palestinian, and another quarter called him neutral. And so on.

Israelis will argue that the Obama administration's pressure on Israel over settlements, peace talks, Iran negotiations and other issues are all unfair and hostile policies. The American perspective is that the US gives Israel a huge amount of aid, to the tune of billions of US dollars per year, lots of military and intelligence support, and a diplomatic shield at the United Nations Security Council, where the US famously vetoes anything unfriendly to Israel. From the American perspective, that should buy some leverage, or at least grant Obama the right to publicly pressure Israel a bit without Israelis wishing to give him ebola.

The point is that, while the world typically sees the US as categorically pro-Israeli to the extremest possible extent on every possible issue, Israelis are a good deal more skeptical of the US. From the Israeli perspective, the US not only could do more for them, but does things that are actively unfriendly. This is not to say that one perception is true or false, but to note that there's more complexity in the relationship, and much more turmoil, than is often portrayed.

More simply, though, the poll is also a reminder that people on the Internet can be jerks.