Study: The recession is behind the best news in health care

Share All sharing options for: Study: The recession is behind the best news in health care

The recent, steep slowdown in health care costs is mostly a product of the Great Recession — suggesting that as just as the economy rebounds, so will Americans' medical spending.

Whether that's good or bad news depends a bit on your vantage point. The new study, published in the journal Health Affairs, does indicate that health spending will grow faster soon. But it also suggests that about one-third of the slowdown wasn't due to the recession — and that could still, on its own, have a huge effect on overall health spending.

"If we trimmed the amount they estimate not to be due to the recession off of health spending for a decade, that would amount to saving $2 trillion over a decade," says Larry Levitt, senior vice president for special initiatives at the Kaiser Family Foundation. "Even in health care, that's real money."

The new research, conducted by a team of professors at Northwestern University's Kellogg School of Management, uses a relatively unique approach to measuring the health cost slowdown's drivers. It exploits the fact that the recession hit some cities harder than others to look at the relationship between an economic downturn and medical spending.

Las Vegas, for example, was especially hard hit and had a steep decline in employment rates between 2008 and 2010 — unlike Dallas, which had a much smaller dip in its employment-to-population ratio.

Dranove and his co-authors use that variation to explore a big question: when the economy goes south, what happens to private health insurance spending?

What they found was that cities with worse recessions, places like Las Vegas and Birmingham, had slow economic growth — and tiny increases in medical spending. In Dallas and other cities with relatively mild downturns, however, health spending grew much faster. 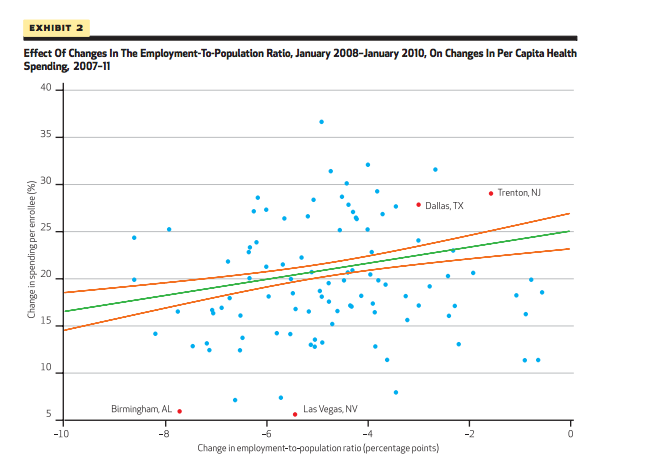 "We asked what happened in places where the economy went in the tank and where it did just fine," David Dranove, the lead study author, says. "And we found the health spending slowdown was really confined to people who were also hit by the Great Recession."

Put another way: health spending grew 2.6 percentage-points slower between 2009 and 2011 than it did in the three years prior. This paper suggests that 1.76 percentage-points of that slowdown were due to the recession — and the remaining 0.84 percentage point due to something else.

A developing consensus: part of the slowdown is structural

Dranove's research is part of a larger body of research that has tried to tease out the causes of the recent health spending slowdown. All tend to show a mix of causes behind the changes — some economic, and some potentially structural changes to the way health care gets delivered.

"Every reputable study...comes to the conclusion we really have decreased health spending"

"There's a consensus that there is some of each, and that there has been a real slowdown independent of the economic slowdown," says Levitt, whose own research estimates, similar to Dranove, attributes three-quarters of the slowdown to the economy.

"Every reputable study that has looked at this comes to the conclusion that we really have decreased health spending beyond what happened in the economy."

As to what changed, that is an area of huge debate. Some health economists (typically those who support the Affordable Care Act) point to the new law as the reason that spending has slowed. Others argue that explanation is implausible, as the slowdown appears to have started prior Obamacare taking effect.

Harvard University professor David Cutler's research, for example, estimates that 8 percent of the slowdown is due to cuts to Medicare reimbursements, some of which were part of the Obamacare. As to the other 55 percent, in his 2013 Health Affairs study, that's simply categorized as "unexplained."

"We did have the ACA, we saw some industry consolidation, increasing use of high deductible health plans, better disease management and increasing adoption of electronic records," Dranove says. "All of those things matter and, taken together, they could have contributed to the slowdown."

If those factors do hold steady, they could have a marked impact on overall health spending — even if just accounting for a small fraction of the recent slowdown.

Levitt has estimated that shaving one percentage point off of health care spending growth — just about the amount that both his and Dranove's research attribute to non-recession causes — would cut health spending by $2 billion over the next decade.

"If we could accomplish that and can sustain that, it would be an enormous change," he says. "The depth of this recession, and its effect on health spending has obscured a huge change that's underlying the slowdown. So much of it is due to the economy that we lose sight of the fact we've made a really big change."