How Howard the Duck crashed Guardians of the Galaxy's opening weekend

Share All sharing options for: How Howard the Duck crashed Guardians of the Galaxy's opening weekend

On a weekend where Guardians of the Galaxy raked in a monstrous $94 million, people can't stop talking about a humanoid avian character that appears in less than a minute of the 122-minute blockbuster. Here's a brief guide to the most mysterious and talked-about character in Guardians (sorry, Thanos):

Who is Howard the Duck? Why are people talking about him? 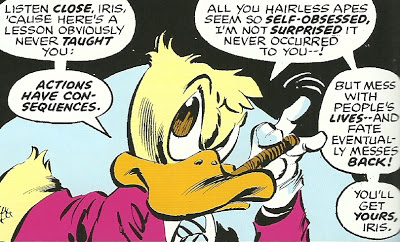 Howard the Duck is an English-speaking, human child-sized, anthropomorphic duck that the late Steve Gerber and artist Val Mayerik created in issue #19 of the Marvel comic Adventure into Fear (1973). According to Marvel, he's the eldest son of Dave and Dottie and was a continuous source of disappointment for them, because he had trouble holding a steady job, and didn't fit into society on his home planet of Duckworld.

He's dropped on earth because of a demon named Thog, who tried some bootleg magic and accidentally plucked Howard from Duckworld and stuck him in the Florida Everglades. Howard got his own comic in 1976 — and it was, for Marvel, a surprising smash hit.

It "inspired a wild gold rush among comic-collectible dealers, who hurried to newsstands and bought up every copy of the issue — sometimes before it even hit the racks," writes Sean Howe in Marvel Comics: The Untold Story. "Rumors circulated that Marvel had conspired to keep the issue from the hands of fans, or that a computer error caused half the press run to be shipped to Canada, where unsold copies had been promptly destroyed."

Since then, he's made the cover of the Village Voice, guest-starred in some of Marvel's biggest comic events, become a countercultural icon, had his own (terrible) movie, and made a cameo in the post-credits scene of Marvel's latest hit, Guardians of the Galaxy.

Howard the Duck's comics were something of a countercultural response to the clean-cut heroes who typically dominated the newsstands. "There's a sensual quality to him," Gerber told Playboy. "If you stood Howard next to Superman, you could tell instantly which would be more interesting to jump into bed with."

Gerber, along with fellow creators like Steve Englehart Jim Starlin, were experimenting with a new style of grittier comics and were hugely popular with fans. They "chased their whims and colored even further outside the lines, mixing and matching scattershot ideas from older Marvel comic books with current news headlines and pop psychology and spinning them into Dadaist mini-masterpieces," Howe explained. "They tackled sexual politics, nudged their protagonists into countercultural pursuits, and even offered sly commentary on Marvel Comics itself," Howe added.

A good example is Howard the Duck #16, which, Howe writes, included "seventeen pages of Howard illustrations by various artists, set to thousands of words of text by Gerber about the difficulty of his deadlines. There were imaginary conversations between Gerber and Howard, a downbeat short story about domesticity (followed by a negative self-critique of the story), and a scenario in which 'outraged Marvelites' forced Howard and Gerber into a whirring machine that produced jars of 'Gerber Strained Brains'; pictures of production manager and deadline taskmaster John Verpoorten lurked on various pages." 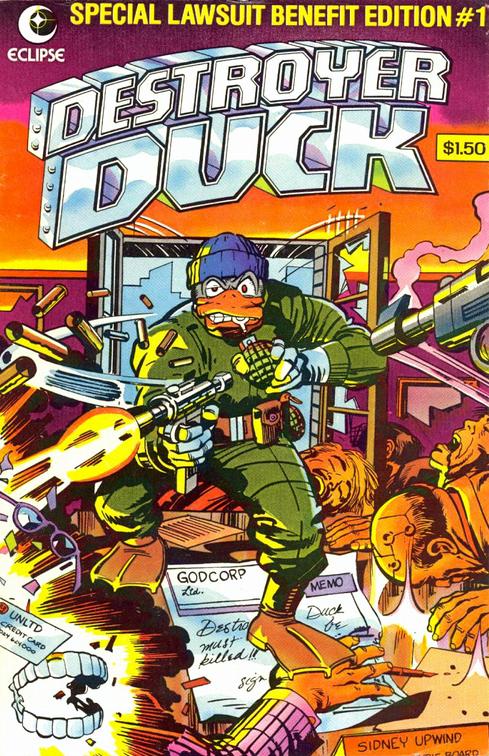 When Gerber was fired from Marvel, he created Destroyer Duck. (Eclipse)

But with publicized problems like failing to make deadlines, Gerber was removed from the comic in February of 1978. His stories stopped appearing in April of that year, he told the Village Voice. Further, Gerber's firing from Marvel and ownership over Howard was the subject of a bitter legal fight which resulted in Gerber going off and creating the character Destroyer Duck (right) with legendary artist Jack Kirby (who also feuded with Marvel) and Eclipse comics in 1982 to help pay for his legal fees and serve as an act of defiance to Marvel.

"It took three years of my life and $140,000 to pursue," Gerber told Los Angeles' KPFK 90.7 FM, explaining his eventual settlement with Marvel in 1985. The terms were sealed. "I had to decide that a truly equitable settlement, which I felt this was, was the way to end the dispute. Marvel owns Howard the Duck, and Marvel has creative control over him," he added.

Without Gerber at the helm, Howard's standalone comic began to lose his original vision and dark ennui. It was canceled in May of 1979. "The duck was canceled because it was pretty awful … once I was gone, Howard was lobotomized, devoid of substance, and turned into simple-minded parody. So they're putting him out of his misery," he told the Voice at the time.

Marvel tried to revive Howard the Duck in 1986, and that same year the comic was eventually turned into a live-action, George Lucas-produced film. A major part of the problem was that the movie's screenwriters, Willard Huck and Gloria Katz, de-fanged Gerber's source material:

Lucasfilm spent $37 million on that soulless fart of a film, which lives on in history as one of the worst films ever created (and has gained what appears to be a Brooklyn-hipster-influenced cult-following).

The film kind of bolstered Howard's presence in the comics. Lucasfilm's real-life travesty made him more liked as an anti-hero and underdog. It also solidified him as something comics readers really cherish: a hero whom mainstreamers and normals don't get.

And he came back in a post-credits scene? 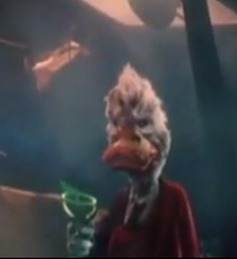 Howard the Duck in the Guardians post-credits scene (Marvel)

Yeah. At the end of The Guardians of the Galaxy movie, The Collector (Benicio Del Toro) is sulking and comforted by Cosmo, the Russian space dog. Howard, now free from his containment, is disgusted by the act.

"Why would you let him lick you like that?" Howard asks.

Why does a post-credits scene matter?

Marvel movies have turned the post-credits scene into an art. They mostly serve as mini-trailers for upcoming movies. We saw this during the post-credits scene of Captain America: Winter Soldier when audiences got their first look at Quicksilver and Scarlet Witch — two characters that will appear in the upcoming Avengers sequel. At the end of X-Men: Day of Future Past (produced by Fox, rather than Marvel Studios, but featuring Marvel characters), we got a glimpse of a young Apocalypse.

And sometimes they tie into other movies. The post-credits scene in The Avengers featured Thanos, a villain who hasn't yet appeared in the Avengers universe, but is featured in Guardians:

The scene is also notable as an homage to Gerber. At the end of the scene, the last thing that flicks on the screen is: "Howard the Duck created by Steve Gerber and Val Mayerick". That's not happened in any other post-credits scene. It could be seen as an apology and final acknowledgment of Gerber's tremendous work.

So what's this mean for Howard? Will there be a Howard the Duck movie?

It's unclear, but another Howard the Duck movie won't be happening in the near future. You see, Disney/Marvel Studios, the company that owns the rights of Howard and every Marvel character (including Howard) that isn't an X-Man, X-Woman, X-villain, Fantastic Four, Fantastic Four villain, Spider-Man, or Spider-Man villain, has a lot of stuff planned between now and 2017.

Avengers: Age of Ultron is coming out next year, Ant-Man is on the way too, and a movie featuring the magical Dr. Strange is in the works and reportedly planned for 2016, along with a third Captain America film. And the Guardians sequel is already scheduled for 2017. Marvel's Stan Lee has stated on the record that the studio is looking at making films featuring characters like Black Panther and Black Widow, along with superhuman groups like the Inhumans.

Sadly, there's not much room for Howard standalone there.

So why did they feature Howard?

Howard the Duck's first appearance in Adventure into Fear #19. (Marvel)

Howard's inclusion is also a wink and nod to comic fans. Guardians, compared to Marvel's other franchises, is full of relative unknowns. It might be the first movie that Marvel has made where the movie serves as a teaser for the comics, and not the other way around.  And chances are, if you're a Guardians reader, then you are probably semi-familiar with Howard's presence and history in Marvel.

Howard is now peppered intermittently throughout the comics. Usually, you can find him hanging out with She-Hulk, another Marvel character written with self-awareness and fourth-wall-breaking abilities. He's also played a role in Marvel's major cross-over events, like 2011's Fear Itself: 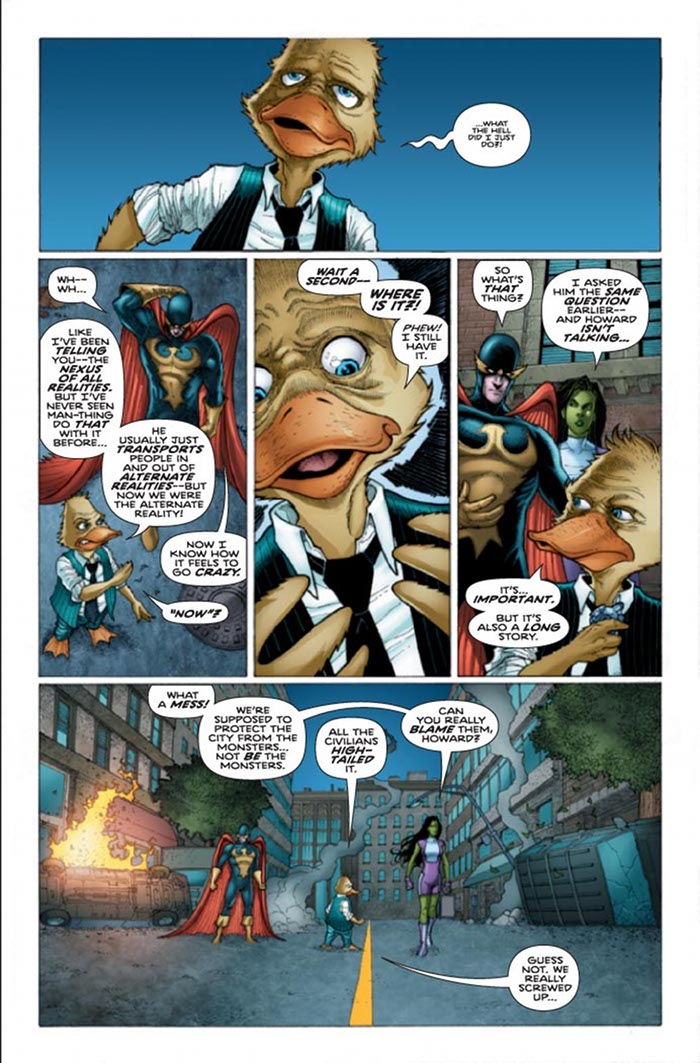 Howard with Nighthawk and She-Hulk in Marvel's Fear Itself event. (Marvel)

And remember, there's that Guardians sequel coming out in 2017— plenty of room for a salty talking duck there.