Share All sharing options for: The Ebola outbreak's real cause: Letting industry drive the research agenda

It's been nearly 40 years since the discovery of Ebola, yet we're dealing with its deadliest outbreak in history and one that is four times larger the first.

Back then, in 1976, the scientific community knew nothing about the hemorrhagic fever. Blood containing the mystery virus was innocently sent in a blue thermos to Belgium, where Flemish scientists figured out they were unwittingly handling a violently lethal pathogen, and named it after a river in what was then Zaire.

Since then, we've learned a lot about Ebola: that it's spread through contact with the bodily fluids of an infected person, that we can stop it by using simple precautionary measures and basic hygiene practices. But every once in a while, these nightmarish outbreaks pop up and capture the international imagination. Worries about global spread are worsened by the fact that Ebola has no vaccine and no cure.

Here's what's surprising and interesting about this state of affairs: it is not caused by a lack of human ingenuity or scientific capacity to come up with Ebola remedies. It's because this is an African disease, and our global innovation system largely ignores the health problems of the poor.

Why Ebola is an African disease

Since the first Ebola outbreak, which killed 280 people in 1976, we discovered that the virus is zoonotic, meaning it's transmitted to humans from an animal reservoir. And those animal reservoirs — believed to be certain species of fruit bats — are endemic in Africa. So that's one reason why all the Ebola outbreaks so far have happened on this one continent.

The countries where Ebola has popped up also happen to be some of the poorest on the planet, with the least health spending per capita. In some cases, less than $100 US per person is invested each year to care for citizens here.

Compare that with the US, where more than $8,000 US is spent every year on the health care of each citizen.

Ebola can have a death rate of up to 90 percent, but we know that isolating sick patients and applying precautionary measures in healthcare settings — wearing gloves, gowns, and masks — will stop the spread of the disease. So can following and testing the contacts of those who fall ill. That's why if the virus ever escaped a containment facility in a country like the US, public-health officials are so confident we could quickly snuff if out it before it ravaged any one, let alone entire communities.

Sadly, the same just isn't true in many parts of Africa. Aid workers on the ground in Guinea, Liberia, and Sierra Leone — where the current outbreak has killed more than 800 people — report that they don't have access to the basics to protect themselves and their patients. Many of their hospitals are dilapidated, there's limited infection control and almost no capacity for contact tracing.

In the current outbreak, more than 60 health workers have already died; all were African nationals, not foreign aid workers. Reports from the ground suggest that the death toll will rise as health professionals are over-taxed, under-resourced, and abandoning hospitals out of fear and overwork.

The reason for Ebola's spread

Ebola will continue to move through Africa — this time, and again in the future — not only because of the viral reservoirs and broken health systems specific to the continent. There are much larger issues at play here. Namely, the global institutions we designed to promote health innovation, trade, and investment perpetuate its spread and prevent its resolution.

This shouldn't be news. Most all of the money for research and development in health comes from the private sector. They naturally have a singular focus — making money — and they do that by selling patent-protected products to many people who can and are willing to pay very high monopoly prices. Not by developing medicines and vaccines for the world's poorest people, like those suffering with Ebola.

Right now, more money goes into fighting baldness and erectile dysfunction than hemorrhagic fevers like dengue or Ebola. In the graph below, you can see global pharmaceutical spending in 2013. Neglected diseases (ie., Ebola) got hardly any of the share of funding. These illnesses primarily grip people in developing countries and rely on investment from the public sector, which funds only a small fraction of total health R&D compared to industry. (In 2009, for example, $240 billion US was invested in health R&D. Of that, $214 billion went to high-income countries, and of that 60 percent came from industry, 30 percent from the public sector, and 10 percent from other sources.)

When a virus like Ebola does attract money, it's mainly from department of defense and not traditional disease research structures since Ebola is considered a potential bioterrorism weapon.

The result of this architecture of investments is that most health products that hit the market don't focus on sicknesses of the poor. Of the 850 health products approved by regulators between 2000 and 2011, only 37 focused on neglected diseases. 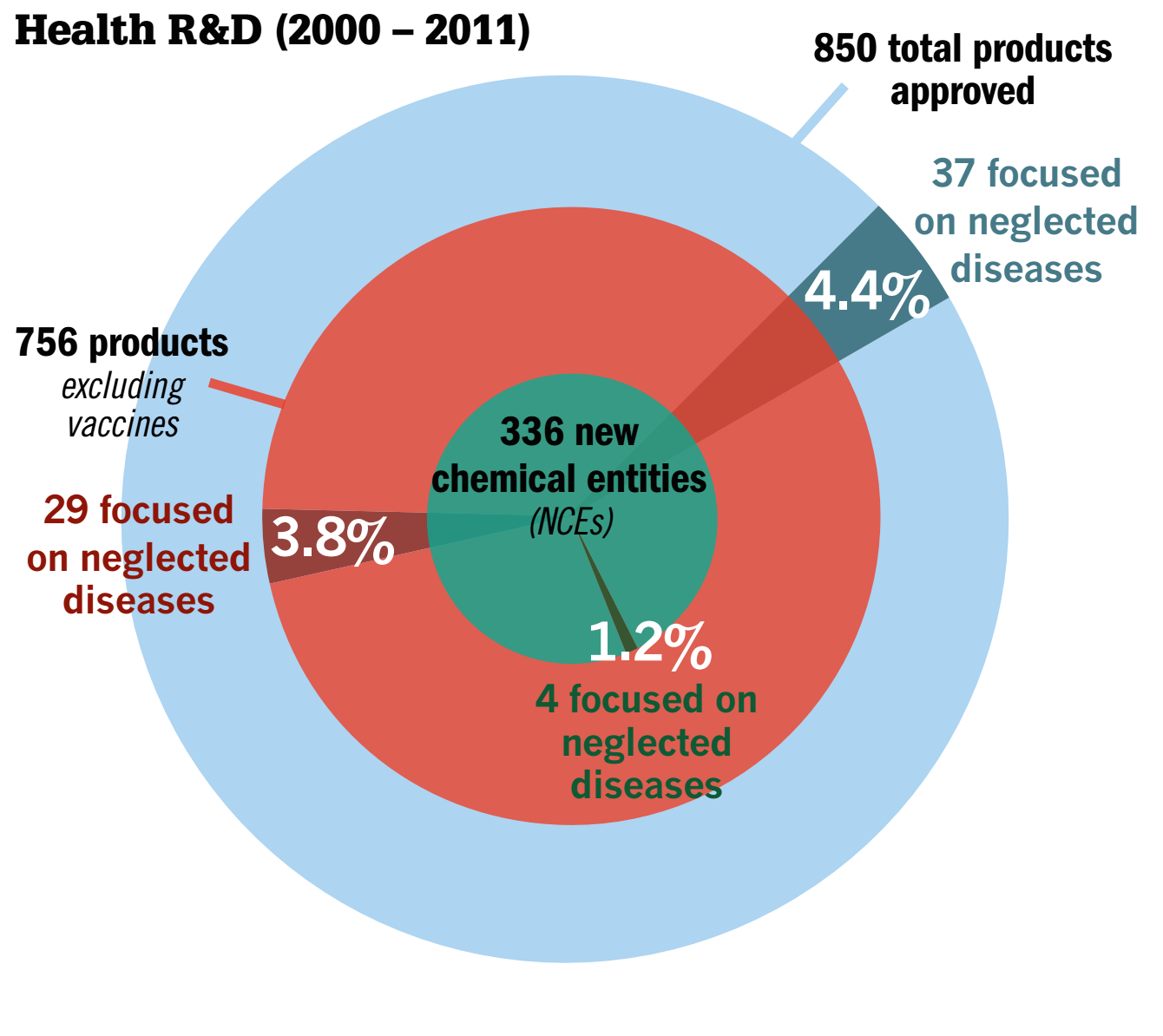 So we can't be surprised about the current Ebola outbreak. We can't lament the fact that there's no cure or that it's an unstoppable and violent virus when remedies could be expedited; we just don't prioritize them over other, more potentially profitable health problems.

As long as we perpetuate this global system of R&D funding, outbreaks of neglected diseases like Ebola will keep happening. Sadly, it's a cause shared by many more diseases of the poor, some of which affect multiple times more people than the one that's currently making headlines. 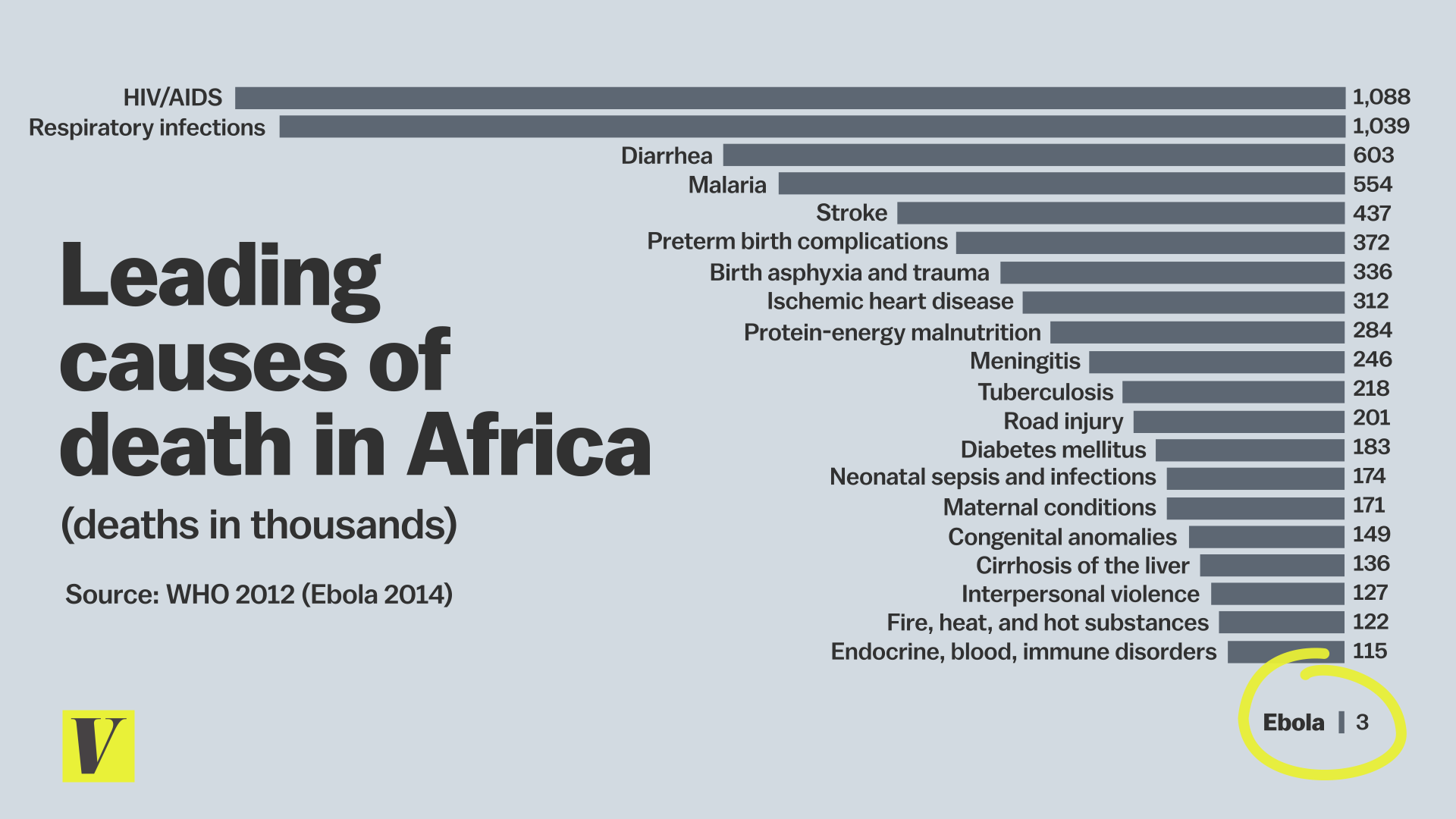