Watch how Louisiana's coastline has vanished over the last 80 years

Share All sharing options for: Watch how Louisiana's coastline has vanished over the last 80 years

Over the last 80 years, Louisiana has lost nearly 2,000 square miles of coastland — land that has simply vanished into the Gulf of Mexico. And much, much more land is likely to disappear in the years ahead unless major changes are made.

That's the subject of a terrific 2014 investigation from Bob Marshall of The Lens and Brian Jacobs and Al Shaw of ProPublica. You should absolutely go read their entire piece (and check out all of their excellent visuals), but I've made a slider image out of two key maps to highlight the very basic change at play here: 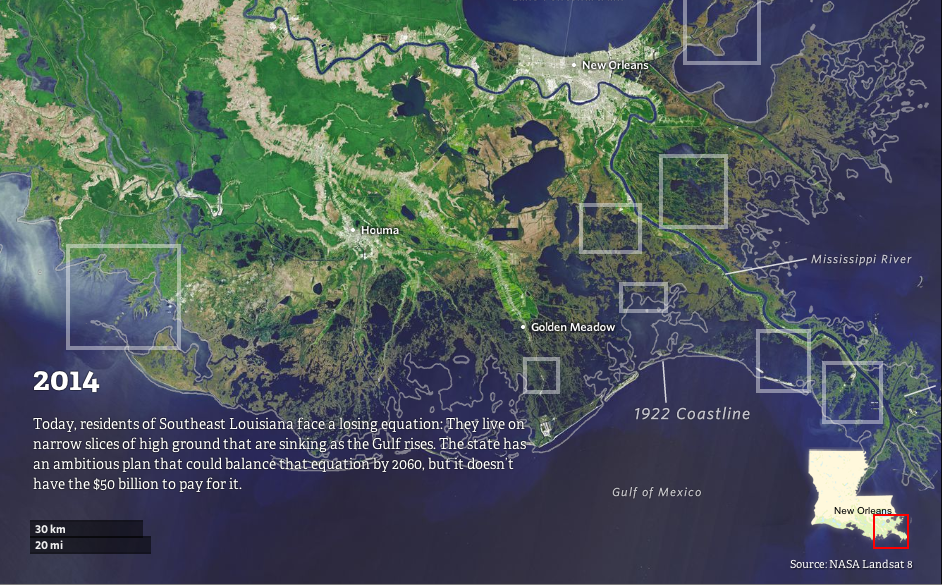 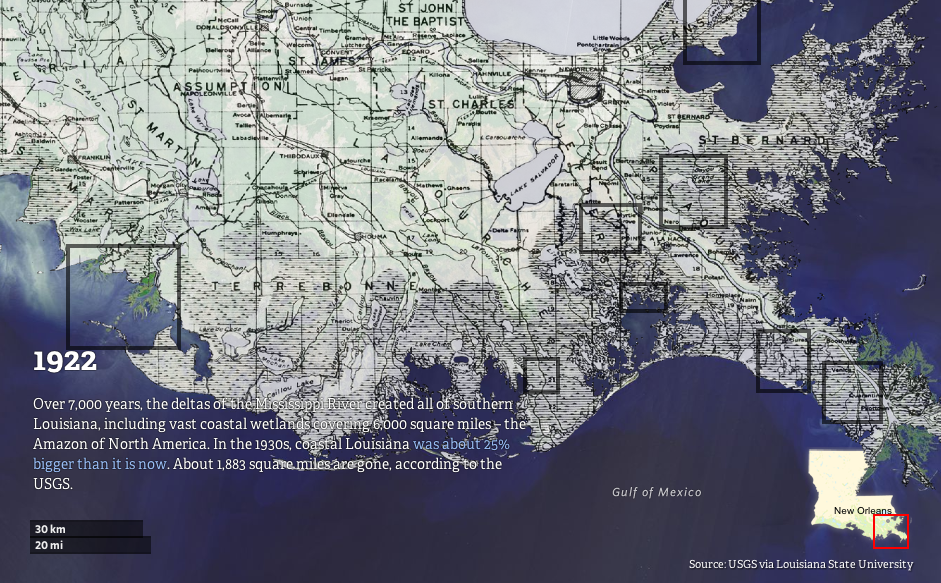 It's worth noting that this mostly isn't a story about global warming and sea-level rise — at least not yet. The land in southeast Louisiana was built up over thousands of years from sediment washed down by the Mississippi River and anchored by plant life in the marshes and wetlands. Without this replenishing, the soil would simply sink into the Gulf of Mexico.

And over the past century, various human activities have disrupted this ecosystem. After the Great Mississippi Flood of 1927, the US Army Corps of Engineers built up a series of levees along the Mississippi that controlled springtime flooding but also blocked sediment from washing down the river and replenishing the delta.

At the same time, the Louisiana coast became a major source of oil and gas during the 20th century. That meant two things. Energy companies dredged thousands of miles of canals through the wetlands to transport equipment through — and those canals allowed shoreline to crumble and saltwater to seep in, killing off plants. Meanwhile, some scientists argue that the land itself has sunk after companies extracted oil and gas from underground wells.

The ProPublica/Lens piece is a vivid and detailed exploration of these dynamics (though I'd add one more factor — the nutria, an invasive rodent species, is also helping destroy the wetlands). Add it up, and the state now loses some 16 square miles of land each year. That can have all sorts of economic impacts — Louisiana's multimillion-dollar shrimp and crab fisheries depend on wetlands as nursery areas, for one. And the loss of land leaves New Orleans and other cities even more exposed to flooding during severe storms.

This is where global warming enters the picture. As the world heats up and the ice caps melt, sea levels are slowly rising. So far, this has been a minor contributor to Louisiana's vanishing coastline. But it's expected to become a much bigger factor in the future.

And if sea level rise accelerates in the decades ahead, as many scientists expect it will, then southeast Louisiana could end up one of the hardest-hit areas. Below is a map by Louisiana State University's Mike Blum showing what the state's coastline could look like in 2100 in the worst-case scenarios:

Now, the scenario in this map isn't inevitable. There's still a range of projections for future sea-level rise — this is just one of them, albeit one that dramatically underscores how vulnerable the region is.

So is there anything the state can do? Back in 2012, Louisiana policymakers unveiled a master plan for storm protection and coastal restoration that would, among other things, revamp the system of levees and allow controlled flooding to replenish the delta. That could at least help slow the sinking. The hitch: this plan is estimated to cost more than $90 billion in all and is still far from fully funded — a study last November by Tulane Law School's Mark Davis estimated that the state was still $71 billion short.

-- You should definitely read the full ProPublica/Lens piece for the full story on Louisiana's land loss. And here's a great Q&A with the authors.

-- In Hakai magazine, Julia Rosen recently wrote a great piece about the (controversial) proposal to use controlled flooding to replenish the Mississippi River Delta. That's very much worth reading.

What is sea-level rise?

Remembering Hurricane Katrina and the aftermath