The amazingly rapid suburbanization of poverty

Share All sharing options for: The amazingly rapid suburbanization of poverty

Once upon a time (specifically, the 1990s), the US was making remarkably fast progress against concentrated poverty. During that decade, the number of poor people living in poor neighborhoods fell by 24 percent.

That progress has entirely reversed, according to a new report from the Brookings Institution. The share of people living in neighborhoods with 40 percent or higher poverty grew by 76 percent between 2000 and the 2008-12 period. And that concentration is growing in suburban neighborhoods in particular, as the below chart shows. 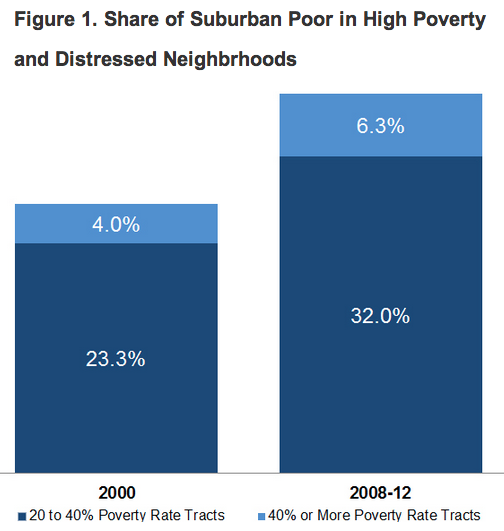 The share of poor people living in distressed neighborhoods (those with 40 percent poverty or more) grew by nearly 78 percent during the 2000s, writes Brookings fellow Elizabeth Kneebone. And that growth came overwhelmingly in the suburbs. The share of the poor population in distressed neighborhoods in the suburbs grew by nearly 140 percent, compared to 50 percent in urban areas. 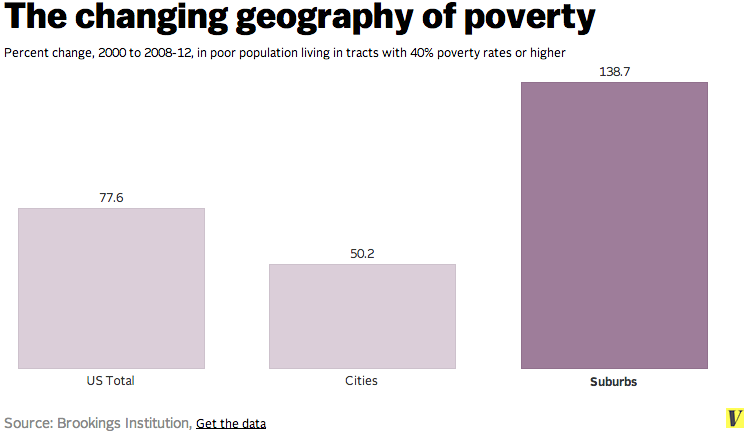 Not only that, but the number of distressed neighborhoods in the suburbs grew by 150 percent over that period, compared to 45 percent in the city.

poverty anywhere is a bad sign, but concentrated poverty comes with additional problems

While poverty anywhere is a bad sign, highly concentrated poverty brings with it additional problems, as people in poor areas face what Kneebone calls "the 'double burden' of not only their own poverty, but also the disadvantages of those around them." Poor neighborhoods tend to have higher crime rates, worse health, and worse public schools, for example. And high economic segregation is also correlated with lower rates of economic mobility — the rates at which people climb up the economic ladder.

It's true that concentrated poverty still remains a much bigger problem in cities than suburbs — 23 percent of poor urban residents live in distressed neighborhoods, compared to 6.3 percent of suburb-dwellers. But the fact that suburban concentration is growing suggests future problems.

"[M]any of these communities are ill-equipped and unprepared to deal with the needs of a growing and increasingly concentrated low-income population," writes Kneebone.

But it also suggests solutions. If gentrification is pushing people out of cities and into lower-priced suburbs, cities might do well to expand the housing supply or help low-income people buy or rent homes. Furthermore, Brookings scholars have found that while many people in suburbs have access to transit, only around one-quarter of metro-area jobs are reachable with a 90-minute ride. Improving public transit and zoning alike to make jobs more accessible could put a dent in concentrated poverty.