The case for investing in stocks, in two charts

Share All sharing options for: The case for investing in stocks, in two charts

In my recent explainer on saving for retirement, I suggested that younger workers should be putting most of their retirement savings into stocks. That runs counter to many peoples' intuitions. We've see two major stock market crashes since 2000. That has led a lot of people think investing in the stock market is foolhardy — even akin to visiting a casino.

And in the short run, they're right. In any given year, a stock market investor can gain as much as 50 percent or lose as much as 40 percent of her capital. But as Dylan Matthews has argued before, things look different from a long-term perspective. The American stock market has never lost money over 20 years, and stocks have consistently outperformed other types of investments. And there are good reasons to think that's not a coincidence.

If you look at the returns of the 500 largest stocks over 1-year periods, it looks pretty scary: 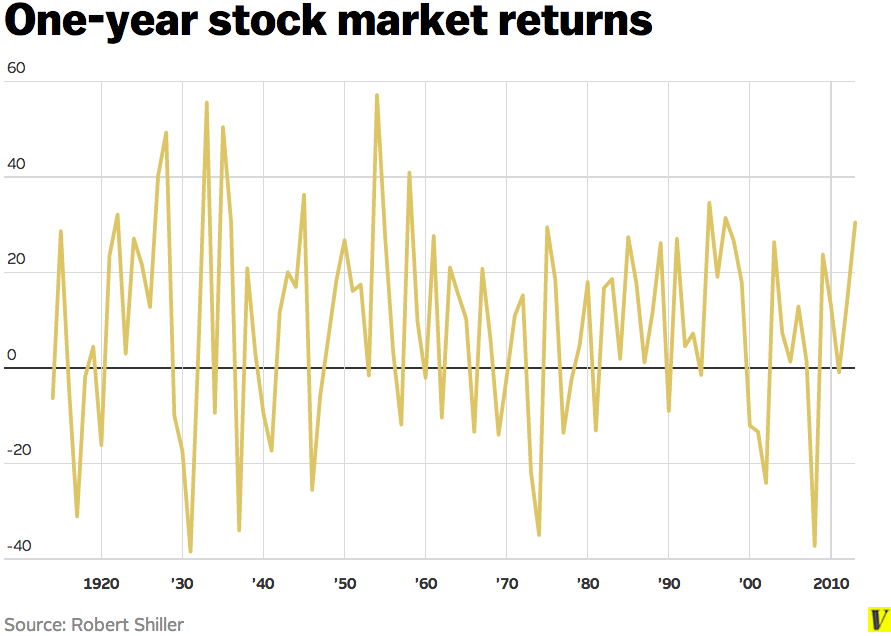 Chart shows 1-year returns (January to December) for the S&P 500, based on data from Robert Shiller, courtesy of Moneychimp.

For example, in 2008 the stock market suffered a decline of 37 percent. That means someone who invested $100,000 in January 2008 had $63,000 left at the end of the year. The stock market suffered similarly terrible performance between 2000 and 2002, losing 42 percent of its value over three years. Many people are understandably terrified of that kind of volatility.

Fortunately, younger workers have many years to accumulate savings and ride out stock market volatility. A prudent investor will begin saving in his 20s or 30s, giving 20 to 40 years to ride out booms and busts. And when we look at stock market returns over longer periods of time, things don't look quite so volatile: 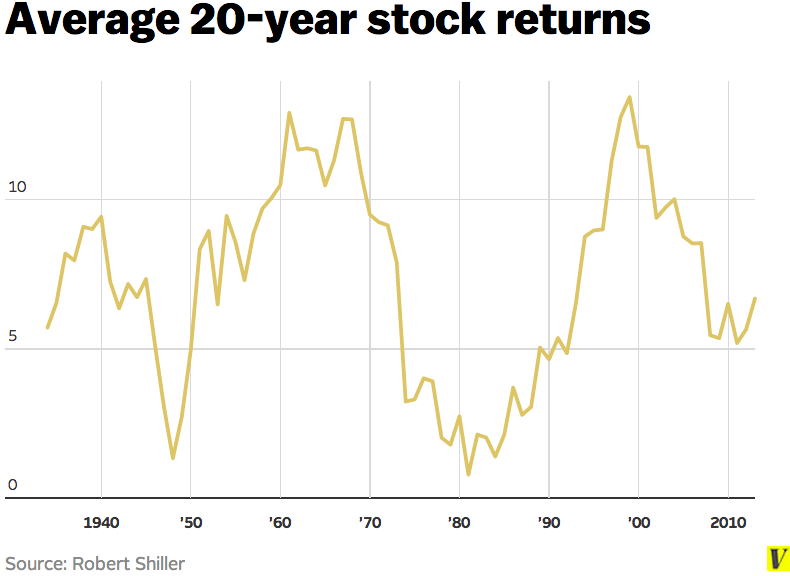 Chart shows 20-year returns for the S&P 500 ending on the date shown. Based on data from Robert Shiller, courtesy of Moneychimp.

And things got even less volatile for people who invested for longer periods. Over the last 120 years the worst 30-year period for stocks, between 1902 and 1931, produced an average return of 3.5 percent. That's better than the average return of government bonds over the same period.

Stocks outperform other investments around the world

Of course, past performance is no guarantee of future results. And the United States has had an unusually successful economy over the last century. But the data show that stocks in most developed countries have produced positive returns — and returns significantly higher than you could get from government bonds — over the long run. The exceptions are countries that have experienced communist revolutions (Russia and China) or lost major wars (Austria and Germany).

Not every country has seen its stock market rise as quickly or as steadily as the United States over the last century. And there have been a few cases (like Japan between 1990 and 2010) where countries have seen negative returns over multiple decades. But these cases are relatively rare. Around the world, people who invested in stocks over the long run have usually come out ahead of those who invested in bonds.

And that's not a coincidence. Some people think that the main way to make money in the stock market is to buy stock when it's under-valued and then re-sell it when the price rises. And it's true that in the short run, stock price fluctuations account for most of the gains investors enjoy.

But these fluctuations don't matter as much for long-term stock returns. Stocks produce positive returns because companies earn profits that they return to their shareholders, either by paying dividends or by buying shares back from shareholders (which itself pushes up stock prices). This steady flow of cash to shareholders helps to ensure that stocks produce positive returns over the long run no matter what happens to stock prices in the short term. And historically, that has produced an average return of 6 to 7 percent per year.