Shooter at Fort Lee Army base: What we know and don't know

Share All sharing options for: Shooter at Fort Lee Army base: What we know and don't know

There was an active shooter at Fort Lee Army base in southeastern Virginia on Monday morning, the base's public affairs officer confirmed around 9:30 A.M. The base then gave the "all clear" about 30 minutes later, indicating that the danger has passed. The incident appears to have been an attempted suicide.

Here's a list of what's confirmed and unconfirmed about the incident. This will be updated as the events unfold on, so keep checking back for details.

— Fort Lee went on lockdown due to an active shooter, first reported at 9:31 A.M.

— The incident involved a female soldier who turned a gun on herself and fired at least one shot in an apparent suicide attempt.

— The shooter was, or began, at the Combined Arms Support Command (CASCOM) building, which is part of the base's headquarters complex.

— People at the base were told to shelter in place.

— Fort Lee gave the "all clear" at around 10 A.M., indicating the immediate danger has passed. Also at 10 A.M., about a dozen local police vehicles rushed the area, "sirens blaring," according to local media.

— Fort Lee is home to 3,200 military personnel and about as many military family members, with as many as 34,000 people there on a given day. CASCOM, where the incident occurred, is something like a "think tank for military sustainment/logistics," according to the Washington Post's Dan Lamothe.

— The US military has been struggling with a growing suicide epidemic since the 2001 and 2003 invasions of Afghanistan and Iraq, which have stretched out deployments and strained families.

— Fort Lee has been working on instituting a warning system in case of an active shooter on base, called Fort Lee Alert, which had not yet been switched on. 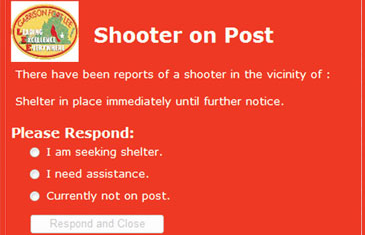 — Whether the female shooter tried to shoot others or only herself.

— Whether anyone, including the shooter, was injured.

— How the shooter brought a gun into the CASCOM building, which is an office complex and does not allow open carry of guns.