Three reasons college textbook prices are out of control

Share All sharing options for: Three reasons college textbook prices are out of control

University of Wyoming professor Peter Thorsness didn't used to pay much attention to how much the introductory biochemistry textbooks on his syllabus cost. He knew they were expensive, but he expected that students would use them over and over as a reference.

Then his daughter went to college. Since then, "I know what things cost," Thorsness said. And that's changed how he thinks about his own textbook assignments.

Recently, Thorsness and other faculty members picked one textbook — Lehninger Principles of Biochemistry — that students could use for three courses in sequence, so they wouldn't have to spend more each semester. And Thorsness knows the exact bookstore price: $277.

The price of college textbooks has been rising rapidly for decades — much faster than consumer prices: 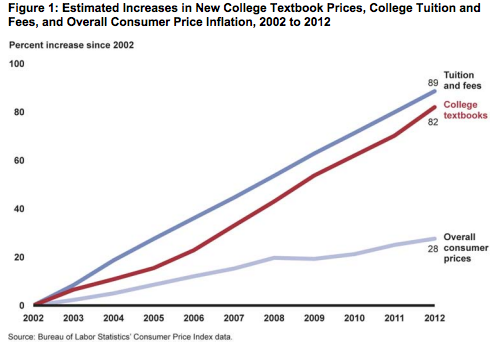 Thorsness's experience offers one clue why. Experts say that prices rise for several reasons, including the fact that the professors assigning the books don't have to actually pay for them. But high prices are also the product of the textbook industry itself, and there are few obvious solutions in sight.

Many professors are like Thorsness used to be. When they pick out the textbook they'll assign their classes, they're looking for the best book, not the best bargain. Since 2008, publishers have been required to tell faculty how much textbooks cost. But a Government Accountability Office report in 2013 found that faculty focus first on what book is most appropriate for their course, not the price tag.

In that way, faculty choosing textbooks based solely on quality are like doctors prescribing a brand-name drug without checking to see if there's a cheaper generic equivalent. The person doing the prescribing isn't the person who does the paying.
Like pharmaceutical companies, textbook publishers send representatives out on sales calls to hand out sample textbooks and urge professors to check out the latest edition. Thorsness said he receives about two such visits each semester and suspects they're more common in places less remote than Laramie, Wyoming.

That means when publishers market their books, it makes more sense to compete on quality and features than on price. And the more features a book has, the more it costs to produce.

A lot of expertise and editing went into the equations in this physics book. (basykes)

The National Association of College Stores said 78 cents of every dollar spent on new textbooks goes to publishers. The rest pays pays for store operations, personnel and profit, as well as a small fraction for shipping costs. That means publishers are the decisive factor in what students pay for books.

And publishers say creating textbooks is very, very costly. A frequent industry estimate for how much it costs to create one traditional textbook is $750,000, Esposito said. While he hasn't seen that number broken down, it makes sense given how complex the textbook production process is.

"These books — they're kind of massive," Esposito said. "The page makeup is complex. There's a lot of editorial work." Science textbooks involve detailed illustrations; complicated equations in math and economics textbooks demand layers of editing. The people involved in this process are also skilled professionals, including artists and scientific experts.

And the college textbook market has changed, too. Publishers used to spread out the cost of a new edition over five years before publishing the next edition and starting the cycle over. Since the publishing industry began consolidating in the 1980s — five major publishers now control 80 percent of the market — competition has become keener, and the window before a new edition has narrowed from five years to three. That means higher prices so that publishers can recoup the costs and make a profit.

It's hard to know exactly how many students are paying these skyrocketing sticker prices. The College Board reports that students budget $1,200 per year for books and supplies. But that's the average of what colleges estimate students should spend to purchase books, computer software and hardware, and other equipment — not a reflection of what they actually spend on textbooks.

Students avoid high textbook prices by renting books from bookstores, buying used books, or paying for cheaper digital copies. Many classes also require books that don't fit the traditional "textbook" model. Literature classes read novels; upper-level classes in the humanities and social sciences are more likely to require several paperback nonfiction books rather than one massive textbook. Buying several books for one course can add up quickly, but the per-copy price is lower and those prices aren't captured in the Bureau of Labor Statistics data.

The result: "Student spending is not increasing at the same rate as pricing," said Rich Hershman, vice president of government relations at the National Association of College Stores. The group surveyed students at 20 campuses on their textbook habits, and found that they spent on average $638 per year on course materials. Most students — 88.5 percent — bought at least one textbook, but 35 percent rented at least one too.

There are many more options for students than there used to be, Hershman said. "It's now used, rental, digital. Different license terms. Rentals that are available for the semester. Rentals that are available for a two-day basis."
And the more students acquire their textbooks through other means, the more publishers must charge for new copies in order to recoup their costs.

Open educational resources have been proposed as one way to avoid rising textbook costs. (Shutterstock)

The last time Congress revised the Higher Education Act, the major law overseeing how the federal government interacts with colleges, they set up new requirements around textbook prices.

Colleges' course descriptions now must include how much the required textbooks cost, so students aren't surprised at the bookstore during the first week of class. Publishers must also disclose the price of books to faculty, breaking out the cost of the book versus additional study guides or online resources.

That hasn't made much difference. Students don't seem to be picking courses based on how much the textbooks cost. And faculty, as the GAO found, still consider quality first and price later.

One alternative is to treat college textbooks more like high school textbooks — a college would purchase the textbooks, then rent them out to students for a fee. That spreads out the cost of materials over multiple years and for multiple students, and makes textbooks cheaper. But to be effective, it also has to work in bulk, which means faculty have to agree on texts to use for their classes.
Another alternative is open educational resources, which are open-source materials available for free that can take the place of textbooks. Thorsness, the University of Wyoming professor, said upper-level science classes are now more likely to use such materials from the National Institutes of Health. And some researchers think that open educational resources and other online materials are poised to disrupt the textbook market.

Publishers are concerned about the eventual possibility that cheaper online resources will hurt their business, Esposito said. But so far it hasn't made much difference.

"There doesn't seem to be a huge prospect of that in the near term despite all of the complaints about it, " he said. "The textbook is this enduring institution that defies everybody's expectations about its collapse."