Did unleaded gasoline, Plan B, and the internet reduce teen births too?

Share All sharing options for: Did unleaded gasoline, Plan B, and the internet reduce teen births too?

Earlier this week, I wrote a long piece on the massive decline in teen birth rates — and how researchers can't fully explain why it's happening. I explored four leading theories that ranged from teens getting better at using contraceptives to the show 16 and Pregnant acting as a deterrent.

There are also some other ideas that I missed and are worth exploring.

During the 1970s, gasoline manufacturers began to phase lead out of their products as more information about the potential health impacts became known. And theres an argument, most recently advanced by Amherst's Jessica Wolpaw Reyes, that that unleaded gasoline contributed significantly to the decline in teen pregnancy.

My colleague Matt Yglesias has written about her findings, which exploited the fact that states switched to unleaded gasoline at different points in the 1970s and 1980s. The general summary is: Reyes finds a change in blood lead levels can reduce the likelihood of teen pregnancy by half.

"This suggests that changes in lead could potentially be responsible for some of the
decline in teen pregnancy in the 1990s, a decline which has proved difficult to explain," Reyes wrote.

This argument, however, doesn't really address the mystery that researchers are puzzling over right now: why teen birth rates declined much faster from 2007 through 2013 than they did in the 20 years prior. Much of the country's leaded gasoline had been phased out by time today's teens were born in the late 1990s. So this change might speak to earlier trends, but not necessarily the especially fast decline we're seeing right now.

The Plan B Theory

That easier access to emergency contraceptives, which happened in the middle of the really fast teen pregnancy decline, could be part of the explanation. Unfortunately, there doesn't seem to be any great data right now about how teen emergency contraceptive use has changed since it became available over the counter.

What we do have is a 2013 report from the Centers for Disease Control and Prevention, looking at age-related trends in emergency contraceptive use. It shows that teenagers do use Plan B, albeit in lower numbers than older women. The data comes from surveys done between 2006 through 2010, which would all be after the pill moved over the counter for women 18 and over. 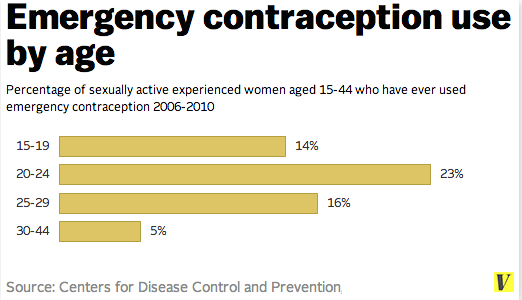 One reason I'm skeptical that emergency contraceptive use is driving the recent decline is that it's happening so much faster among younger teens — the girls who did not have access to over-the-counter Plan B until 2013. You can see that in the new federal data released Wednesday: 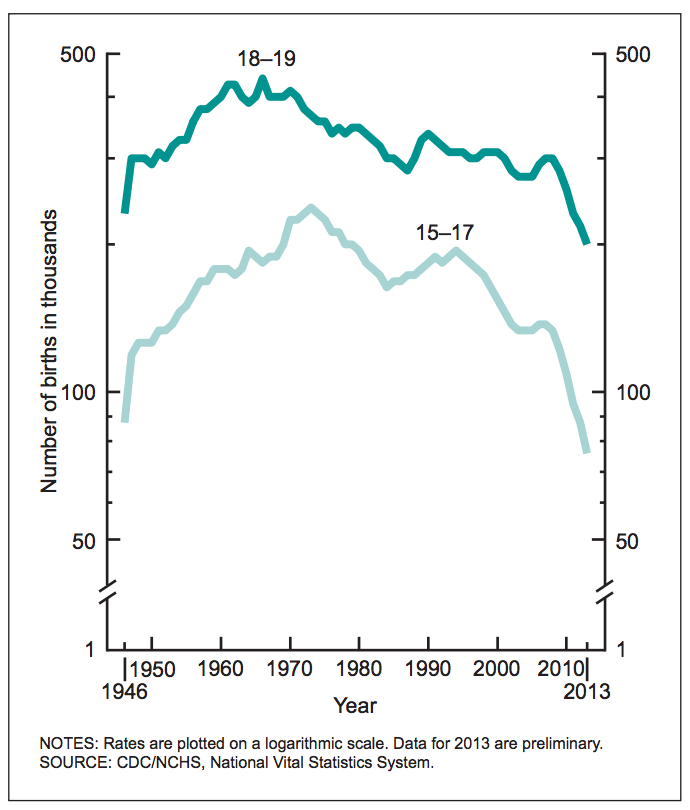 There are two version of the "it's the internet" theory that I heard from readers this week. One is that teenagers now have more access to information now than ever before; they can Google sex questions they might be too embarrassed to ask their parents, and have therefore become more educated about pregnancy risks.

The second version of the theory is that teenagers are spending so much time on the internet — and on their tablets and on their phones — that they don't hang out as much in real life. As a result, there's less sex and fewer babies.

There is, unfortunately, sparse information on this topic — but what does exist suggests the internet has become a dominant force in how teenagers now learn about sex. In one 2010 survey of 1,500 teens by non-profit ISIS, Inc., teenagers said that they learned the most about sexual topics online — more than from doctors, family members, or friends. 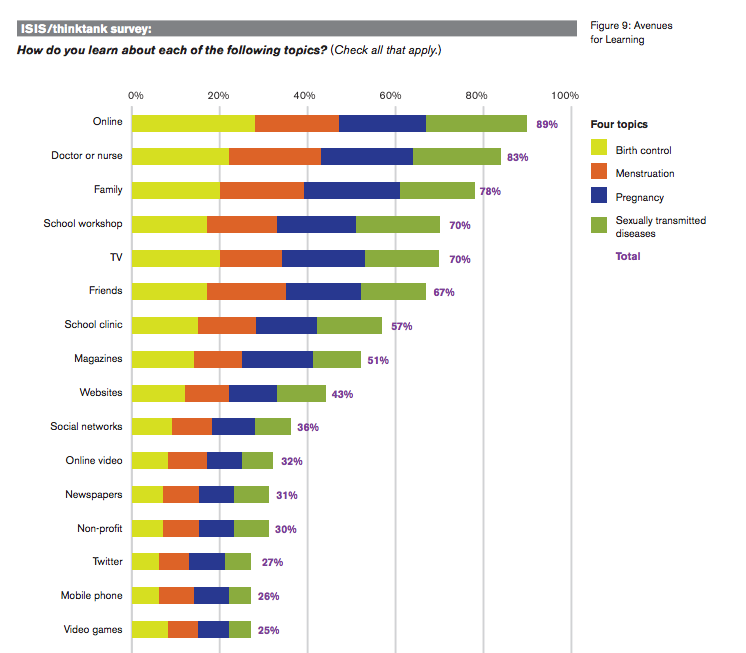 Whether teenagers are finding good information about sex on the internet is a different story. When the same survey asked teenagers what they thought was the most effective way to learn about sex, about 11 percent cited online searches — while 22 percent of men and 19 percent of women cited formal sex education programs in school.

As to the second version of the internet theory — that teens are too glued to their iPhones to have sex — there was a general trend towards lower sexual activity among teenagers that seems to have plateaued in the late 1990s and early 2000s. That's what you see in the Youth Risk Behavior Survey, a biannual federal survey of America's high school students.

This data suggests that sexual activity among teenagers has held relatively steady since the early 2000s, with the advent of the iPhone in 2007 leading to no noticeable declines.

None of these theories are the ones that came up when I talked to lots of teen pregnancy researchers about what they thought was going on; nor does the research seem to strongly back up their role in the recent, really steep decline. That doesn't mean they might not have been some small factor, but it's unlikely any of these are the dominant factor at play.