Is Iceland's volcano erupting? Scientists are still waiting to see.

Share All sharing options for: Is Iceland's volcano erupting? Scientists are still waiting to see.

Note: This post has been updated to reflect new developments and subsequent doubts about whether magma from the volcano actaully reached the surface.

A volcano on Iceland buried beneath a thick glacier may or may not be erupting — after a week of earthquakes in the region. But scientists now disagree on what, exactly, is happening.

Early on Saturday August 23, officials thought they had detected a small lava eruption near Iceland's Bárðarbunga volcano, which is buried underneath the massive Vatnajokull glacier in the center of the island. But later in the day, scientists disagreed as to whether magma had actually reached the surface or not.

Here was the initial announcement early on Saturday morning: "It is believed that a small subglacial lava-eruption has begun under the Dyngjujökull glacier," the Icelandic Meteorological Office said. "The aviation color code for the Bárðarbunga volcano has been changed from orange to red" (red means an eruption is either imminent or in progress).

By the evening, however, officials began to doubt an eruption occurred. "Presently there are no signs of ongoing volcanic activity," the IMO reported. "The aviation color code for the Bárðarbunga volcano remains red as an imminent eruption can not be excluded." Among other things, the IMO noted that overflights had not detected any changes on the glacier — and there wasn't the sort of flooding you'd expect if magma was melting the glacier: 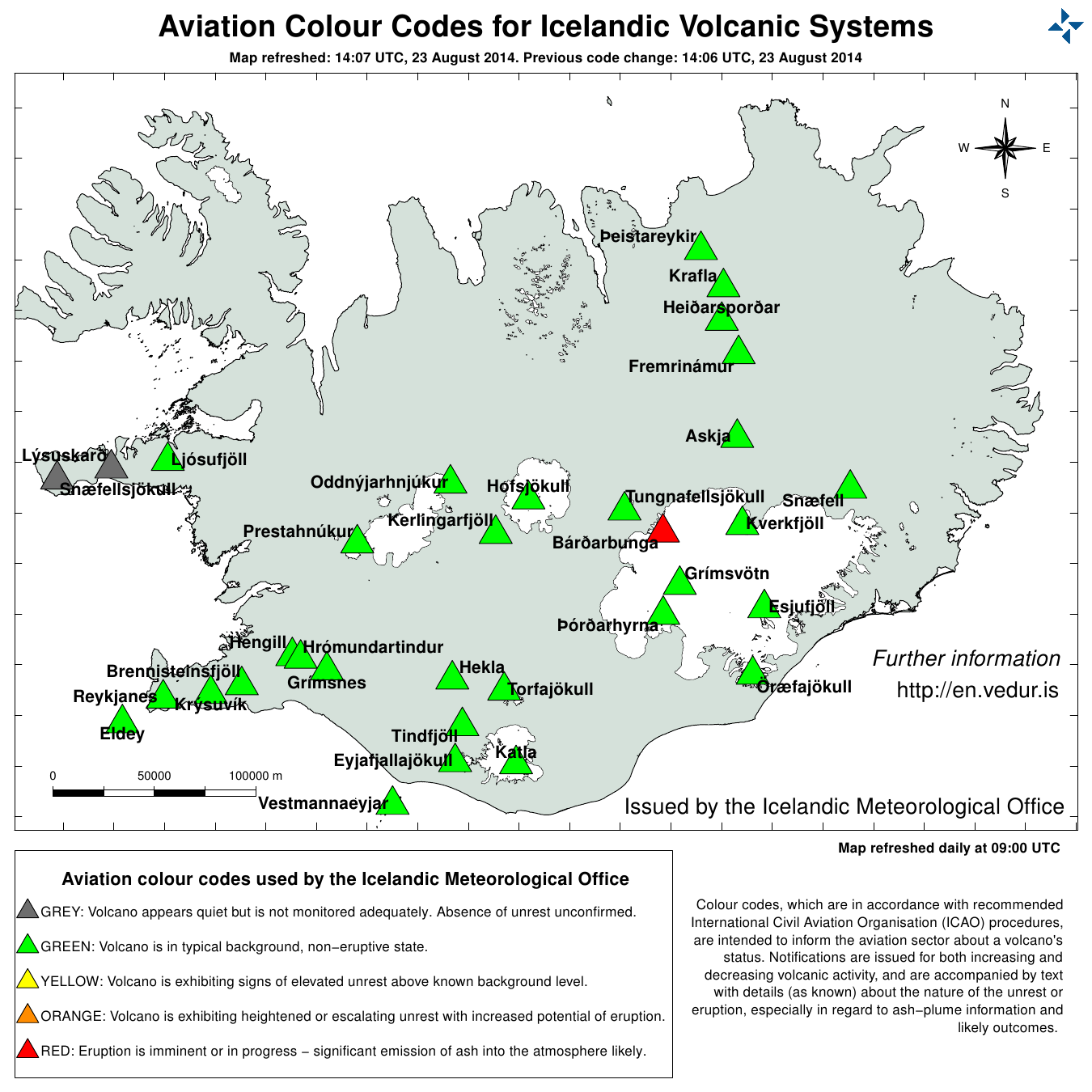 Some background: Since August 16, scientists have been tracking thousands of small earthquakes in the vicinity of Iceland's Bárðarbunga volcanic system, which is covered by the country's massive Vatnajokull glacier. The earthquakes were a sign that magma was on the move.

Then, on August 23, scientists thought they'd detected "subglacial" eruption under the Dyngjujökull icecap in the northern part of the glacier. That would mean that lava is coming out of the volcano and beginning to melt the ice from below.

By evening, however, more and more experts had doubts that an eruption had occurred. Overflights detected no signs of change on the glacier, and there no signs of floodwater draining from the glacier. Still, in light of the earthquake activity, the IMO couldn't rule out an imminent eruption and has kept the "red" code for Bárðarbunga.

The IMO estimates that the ice above the eruption area is between 150 and 400 meters thick, and that any magma from the ground could take up to 20 hours to break through — if it even does break through.

Whether an eruption occurs and how it evolves will depend on how much magma there is, and how forcefully it comes up. Subglacial eruptions can be quite dramatic, however: When magma melts through ice it can create giant steam explosions that sends clouds of ash high into the atmosphere. The last big subglacial eruption took place in 2011, at the nearby Grímsvötn volcano. That eruption broke through the ice, spewed ash 20 kilometers into the air — and disrupted air travel for days.

As such, Iceland's aviation sector is currently on high alert, though no flights have yet been canceled. If any ash does billow up into the air, it could potentially interrupt flights in the area. If there's a lot of ash, that could well spread towards Europe, although it's hard to say just yet.

On the upside, it's unlikely that any event would be as disruptive as the 2010 Eyjafjallajökull eruption in Iceland that grounded flights across Europe for six whole days. That's because airlines have changed their policies to allow planes to fly in areas with up to 4,000 micrograms of ash per cubic meter. So fewer planes get grounded during Iceland's periodic eruptions.

Map from the civil aviation authorities showing the area defined as danger area and therefor the area is closed. pic.twitter.com/eMvnkh0uB6

On the other hand, if the volcano ends up melting a lot of ice in the glacier, that could lead to flooding in Iceland — particularly in nearby areas. Authorities have been warning about the prospect of floods for days now.

(See here for our full rundown of why Iceland has so many volcanoes, what's been going on at Bárðarbunga and how an eruption might affect aviation.)

How to track the eruption

The Icelandic Met Office has been offering daily — and sometimes more than daily — updates on the volcano. There are also frequent English-language updates from the Icelandic newspaper Morgunblaðið.

Volcano obsessives can find all the different livestreams here.

On top of that, there are plenty of volcano experts on Twitter who are watching the eruption closely — including Dave McGarvie, Gisli Olafsson, and Erik Klemetti. Journalist Alexandra Witze has been tracking Icelandic volcanoes for a long time and is definitely worth following. And John Stevenson has done a lot of excellent work on the impacts of volcanic eruptions on aviation.

Here's a sample of tweets from early on Saturday, when it looked like the eruption was happening:

So far #Bardarbunga eruption is considered small and response is according to that. Closely monitored in case it expands #ashtag

#Bárðarbunga. If the erupting magma is rising from the dyke and not being replenished (much), then this will just be a small eruption.

No volcanic ash advisories in place, so far => flights are OK, so far. Updates on @metoffice website: http://t.co/7a6CgM70iI #Bárðarbunga

Still no sign on the surface of #Bardarbunga of the eruption

And here are some tweets from later on Saturday, when it became less clear whether an eruption had occurred:

Scientists in Iceland do not agree as to what happened today near #Bardarbunga http://t.co/5g37b7wA0Y

Check out the eruptible history of #Bardarbunga: http://t.co/RXzoCBw2l8. Lots of unconfirmed sub glacial eruptions. So, not unprecedented.