Share All sharing options for: The black-white gap in life expectancy is narrowing — but it's still too wide

Racial gaps in life expectancy are narrowing, new research shows, but there are still large disparities in lifespans of blacks and whites.

Both the disparity and recent gains aren't distributed uniformly across the nation. New England and the Middle Atlantic showed the biggest declines for men, while the East and West South Central saw the smallest declines. 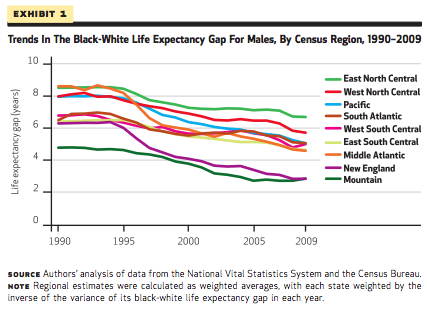 The pattern is similar for females, though the difference was smaller to start with so the gap contracted less overall. 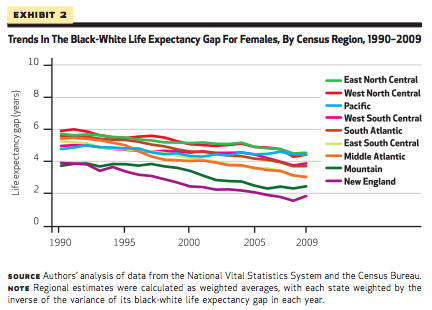 What do we learn from different states?

Racial differences in life expectancy are hard to interpret. Life expectancy has improved across races and genders over the last 20 years, but that improvement has been uneven, meaning that the black-white gap has worsened in some areas.

Overall, most of the convergence can be attributed to faster longevity gains among blacks. But myriad factors influence how long a person lives, and many of those factors play out differently in different places. Looking at the gaps on a state-by-state basis allows the authors to speculate carefully about what could be behind the trends — these are factors that could be obscured if you looked at the nation as a whole.

life expectancy has improved across races, but those improvements have been uneven.

The divide narrowed dramatically in New York for both men and women. This was likely impacted by public health and safety gains in New York City: it saw a substantial decline in homicide and invested significant resources over the study period to reduce deaths related to HIV and AIDS.

California's inequality in black-white life expectancy about matched New York's in 1990. Longevity improved for both races over the next two decades — and those improvements were better than most of the nation — but the gap didn't really narrow. The authors suggest that statewide declines in tobacco use might have disproportionately benefitted whites, meaning their life expectancy gains kept pace with longevity improvements among blacks.

The District of Columbia tells a more discouraging tale. Over the last two decades, the city has experienced an incredible demographic shift; the population fell from nearly 70 percent black in 1990 to 50 percent 2009.

"Both black and white males in the District of Columbia gained nearly ten years of life expectancy from 1990 to 2009," the authors write, "Yet the life expectancy gap there remained constant at nearly fifteen years and easily remains the largest among the states."

Education is probably an important part of the story

A common critique in health care is that the incessant focus on medicine neglects more important factors that determines health, like the environment in which a person is born and raised. Among the social factors that influence health, education is widely considered one of the most critical.

these gains are no reason for complacency.

"There has been some black-white convergence in educational attainment," the authors note. "Recent estimates of widening life expectancy differences by education suggest that state differences in black-white education inequalities could play some role in explaining divergent state trends."

Life expectancy just scratches the surface of disparities in health. The gains in recent decades suggest that we may be starting to make inroads on the social determinants of health, which sit at the core of our health care system's problems, but these gains are no reason for complacency.