How Jenny Lewis became the queen of indie rock

Share All sharing options for: How Jenny Lewis became the queen of indie rock

Jenny Lewis has the best bangs in music. She's a red-haired, blue-eyed, indie-rock singer with a splash of Southern gospel soul.  When she takes the stage on tour for her new album The Voyager, she wears a white pantsuit graffitied with the colors of the rainbow and captivates crowds that know every word to every single song on her setlist. She is greeted like the queen of indie rock.

Six years after her last solo album, and seven years since she fronted the indie-rock band Rilo Kiley, Jenny Lewis is back to basics, and has finally found a way to make smart, catchy songs that still have a lot of heart. Let's take a look at how she got here.

Just One of the Guys

In 1998, Blake Sennett and Pierre de Reeder, who were friends from high-school, formed the band called Rilo Kiley, with Sennett as frontman on guitar and de Reeder on bass. Sennet asked Lewis to join the band as a back-up vocalist, but she refused. She wouldn't join the band unless she could sing lead vocals.  He agreed, and she joined in 1999.

Early on, Rilo Kiley didn't have a publicist or a real record label. They recorded their first two albums— Initial Friend and Take Offs and Landings— at home. Though the melodies on these albums are poppy and up-beat, Lewis's voice is anything but.  She sounds muted: her voice somewhere between a whisper and a mutter. The only lasting influence from these early tracks is the humor. On "The Frug" Lewis sings:

"I can hate your girl

I can tell you that she's real pretty

I can take my clothes off

I cannot fall in love."

The subtle intellect of the Rilo Kiley lyrics is what gave the band notoriety. They opened for Death Cab for Cutie and Pedro the Lion. But Lewis was still a background player in the band. Sennett dominated the lyric production, the sound, and the stage.

The true beginning of Lewis as a figurehead came with the release of The Execution of All Things in 2002. Rilo Kiley switched from the sweet, melodic harmonies of Take Offs and Landings to personally revealing lyrics and rock-and-roll guitar. Suddenly, Jenny Lewis was front and center singing:

"And sometimes when you're on, you're really fucking onAnd your friends they sing along and they love youBut the lows are so extreme that the good seems fucking cheapAnd it teases you for weeks in it's absenceBut you'll fight and you'll make it through"

But she was still timid. On stage, she wore t-shirts and her hair in a ponytail as she stood still and strummed a fender stratocaster. But the Lewis of "A Better Son/Daughter" showed that she had passion, anger even. Suddenly, she was recording songs with Ben Gibbard for The Postal Service. While Sennett worked with his new band, The Elected, Lewis worked on her own.

By the time More Adventurous released in 2004, Lewis was the band's frontwoman. The first song was titled "It's a Hit," and the album certainly was. It was produced by Warner Bros., and the band's first album to rank on the Billboard chart (at No. 161). By 2005 when the band went on tour, Lewis's red hair fell to her mid-back and the front was chopped into her signature straight thick bangs. In one album, she became a legend. Rumors circulated that she recorded "I Never" in the nude.

"No matter how much I try/ to be just one of the guys/ there's a little something inside/ that won't let me," Lewis sings on the first single on her new album. The song could accurately reference how Lewis felt in 2004. When she was offered the opportunity to record her own album, she took it.

Rabbit Fur Coat, Lewis's first solo album, was released in 2005. The album is personal: filled with songs about breakups, long-lost loves, and the parents who abandoned her. Unlike the pop-rock anthems of Rilo Kiley, solo Lewis had a very different sound. On the album, she is backed vocally by The Watson Twins, who give the album a gospel-like harmony. The album as a whole struggles with continuity, but the songs that are good on Rabbit Fur Coat are gems. Songs like "You are What You Love" and "Rise Up with Fists" have a classic rock feel that Lewis flourishes in.

In the wake of Lewis's personal success, Rilo Kiley released their last full album in 2007. (Sennet would declare Rilo Kiley dead four year later.) Under The Blacklight was a shameless stab at commercial success made up of tight '70's-inspired pop songs. Right from the start of the album, Lewis shows off. On "Silver Lining," she sings over a percussive clap and a simple, repetitive guitar riff:

And she was, literally and figuratively, gold. There, center stage in front of a gold lamé curtain was Lewis, her shorts and t-shirts traded for hot pants and a golden belt. Her whispering voice was replaced with a full lung set that could hit the high-notes. Under the Blacklight was good. It brought Rilo Kiley commercial success and hit No. 22 on the Billboard. But Lewis was better on her own.

She released Acid Tongue in 2008, and it hit no. 24 on the Billboard chart. The album had the confidence her first solo album lacked. It was imperfect and at time inconsistent, but songs like "The Next Messiah" — nine-minute long country-inspired anthem with enough stops and starts to keep it from ever getting boring — are indie-rock gold.

Then, just when it seemed that Lewis was on the road to becoming a true icon she disappeared. 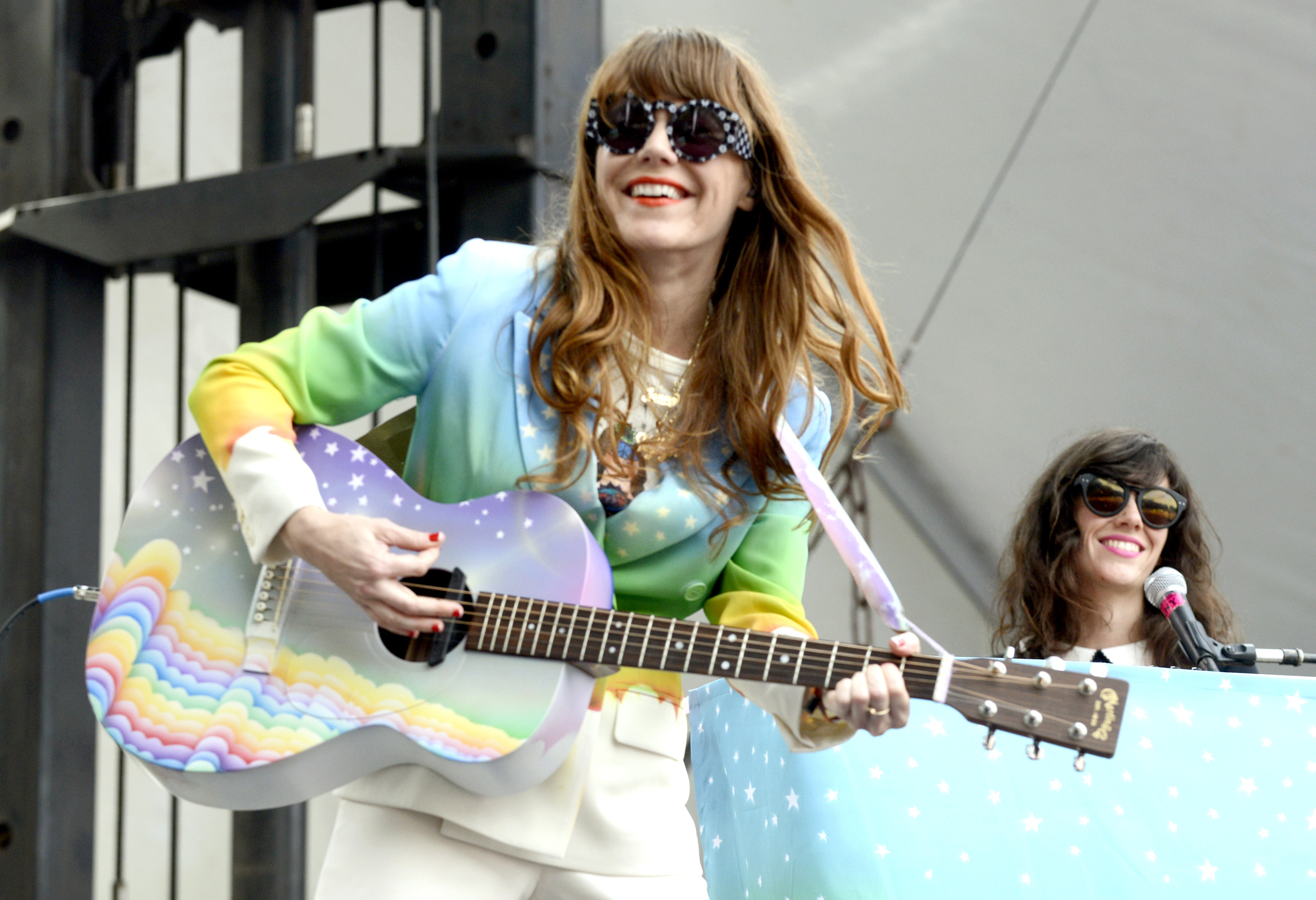 By 2008, Lewis had written and recorded four albums in five years.  In 2010, she released a virtually unnoticed album I'm Having Fun Now with her boyfriend Johnathan Rice under the band name Jenny & Johnny. Lewis kept busy, performing at Bluegrass festivals and joining The Postal Service's 10 year anniversary tour, but for three years,  Lewis produced nothing new.

But in 2014, her writer's block lifted. The Voyager is a welcome return to Lewis' roots, a personal album about her own experiences. It's also her first Top 10 album, reaching No. 9 on the Billboard Top 200 in early August. Through her songs she reveals the many selves she has had, the many experiences: she references 9/11, the L.A. riots, and being a late bloomer. Her lyrics are still smart, and she's still funny, but the album itself is more mature than any of her previous work. The album has range. It is a colorful end to a kind of dark period of time. It hits disco, rock-and-roll, pop, and country, all with the signature Lewis bent.

There are four or five songs on every album Lewis has written that are catchy, smart, and enjoyable. The Voyager is no different. It's best songs are canonical Lewis works, and some are utterly forgettable.  But even at her worst, Jenny Lewis is still one of the best modern indie rock-stars we have.

Here are some songs where Lewis is at her best: