Share All sharing options for: Black students in Ferguson are more likely to be suspended and arrested

Black students nationally are more likely to be suspended, expelled, and arrested at school than white students. Ferguson-Florissant School District, which has delayed its first day of school by 11 days in the midst of ongoing protests, is no exception.

Referrals to law enforcement and school-related arrests are also more common for black students: 2 percent of all black students without disabilities in Ferguson-Florissant were referred to law enforcement in 2013, compared with 0.6 percent of white students. (The Education Department separates students from disabilities from those without for data collection purposes.)

Meanwhile, black students in Ferguson-Florissant are also less likely to be enrolled in the gifted and talented program. Although white students are just 15 percent of the district, they make up 48 percent of enrollment in gifted classes, and they're also overrepresented — relative to black students — in calculus, chemistry and physics. 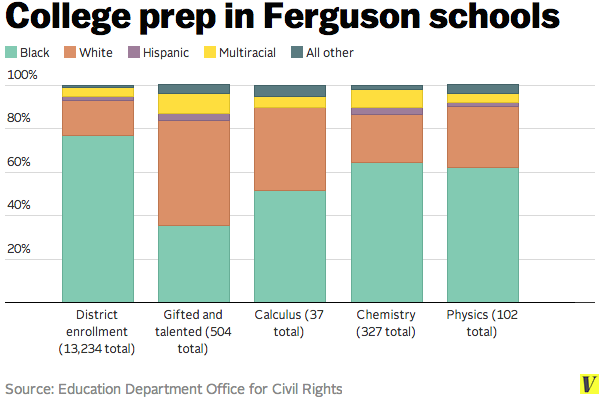 All of this aligns with national trends. If anything, the racial gap isn't quite as bad in Ferguson as it is nationally. Nationally, black students make up only about 16 percent of public school enrollment, but 27 percent of students referred to law enforcement and 31 percent of those arrested, according to the Education Department.

To learn more about the protests in Ferguson, read the full explainer, Vox's timeline, and watch the two-minute video below: