A $10,169 blood test is everything wrong with American health care

Share All sharing options for: A $10,169 blood test is everything wrong with American health care

A lipid panel is one of the most basic blood tests in modern medicine. Doctors use it to measure cholesterol levels in their patients, probably millions of times each year.

This is not a procedure where some hospitals are really great at lipid panels and some are terrible. There's just not space for quality variation: you are running blood through a machine and pressing buttons. That's it.

And that all makes it a bit baffling why, in California, a lipid panel can cost anywhere between $10 and $10,000. In either case, it is the exact same test.

"We're not talking twofold or threefold variation. It's a different level of magnitude."

"What we were trying to see is, when we get down the simplest, most basic form of medicine, how much variation is there in price?" says Renee Hsia, an associate professor at University of California, San Francisco who published the price data in a recent study.

"It shows how big the variation really is. We're not talking twofold or threefold differences, it's a completely different level of magnitude."

For this research, published in August in the British Medical Journal, Hsia and her colleagues compiled reams of data about how much more than 100 hospitals charged for basic blood work. The prices these facilities charged consumers were all over the map.

The charge for a lipid panel ranged from $10 to $10,169. Hospital prices for a basic metabolic panel (which doctors use to measure the body's metabolism) were $35 at one facility — and $7,303 at another.

For every blood test that the researchers looked at, they found pretty giant variation: 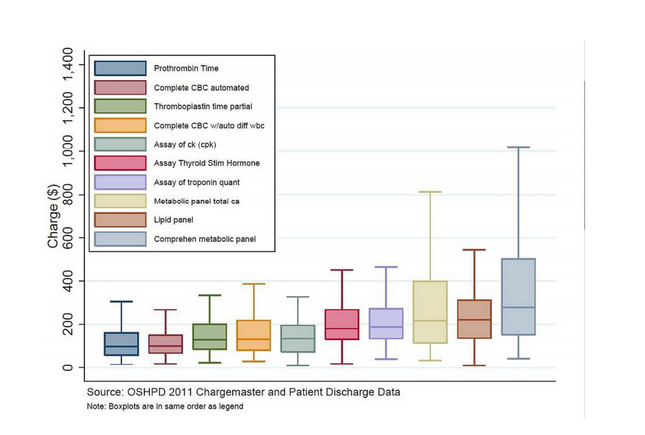 This huge variation in the price of a really simple, incredibly basic blood test tells us a few things about the American health care system.

Blood tests aren't the only place with this variation

Hsia's previous research looked at the cost of an appendectomy in California and found similarly gigantic variation. For an appendectomy with no complications, she found that hospitals in the state would charge anywhere between $1,529 and $186,955.

One the issues with that study, she says, is that different hospitals might treat patients differently. "Some hospital might use more IV bags than others or one doctor could be ordering a lot of blood tests," she says.

The point of comparing an incredibly basic blood test, and its prices, was to distill down to a very basic test that offers no space for variation — but still has a huge range in how much hospitals will charge.

Not every patient pays the full charge rate: insurance companies, for example, typically negotiate a lower rate with the hospital. Medicare, which covers seniors, has a set fee schedule it uses. But these are the prices that an uninsured patient — who doesn't have a health plan bargaining on her behalf — could face.

"If I'm hospitalized, don't have insurance and my doctor orders three days worth of blood tests, this is what I'm getting billed for," Hsia says.

What this tells us about American health care

For one, there's not much price transparency: it's really hard to know whether one hospital is charging $10 or $10,169 because prices are rarely listed. For this particular study, Hsia literally had to hire a software engineer to collect the data and line up all the different hospitals against each other.

The $10,169 blood test tells us we're suckers: we've developed a health care system where its hospitals have pretty full authority to name their price with little protest from consumers.

Americans are getting suckered on health prices

For people with health insurance, really big price variation often isn't a concern. If their plan covers the bill, it doesn't matter to them, personally, whether they get the $10 test or the $10,000 one.

For those without coverage (or those whose coverage only covers a certain percent of the bill), price variation matters a lot. Getting a $10,000 blood test can put a patient into bankruptcy. But right now, our health care system doesn't have the mechanisms to limit those high charges — nor would the patient likely have the tools to know the cost of his or her blood test to begin with.

"There's no other industry where you see this kind of extreme variation," Hsia says. "And nobody has ever really challenged it. It shows an extreme inefficiency, and something we really need to change."