How Obamacare could make filing taxes a nightmare

Share All sharing options for: How Obamacare could make filing taxes a nightmare

This tax season will be a messy one for most of Obamacare's 8 million enrollees.

Individuals and families who bought subsidized coverage have been receiving tax credits based on whatever amount they thought they would earn this year. Upon filing taxes, the IRS will reconcile the amount of subsidy received, based on expected income, with the person's actual income.

That's where things can get ugly.

How much of a problem is this?

"INCOME VOLATILITY IS MUCH HIGHER AMONG THOSE WHO WERE UNINSURED BEFORE REFORM."

Since most Obamacare enrollees are expected to have significant changes in their incomes, this could be a significant problem.

"Income volatility is much higher among those who were uninsured before reform than among those who had insurance," says George Brandes, vice president for health care programs at Jackson Hewitt Tax Service. "Many people with stable, salaried jobs already had health insurance through their employers."
In a 2013 Health Affairs paper, economists estimated that over 98 percent of enrollees on the California exchange would have some change in their income from one year to the next (they looked at 2018 and 2019).

Their analysis suggests that 38.4 percent of enrollees receiving subsidies would owe the government some kind of repayment if individuals never reported income changes to the exchange. Another 41 percent would receive tax refunds, because they would become eligible for bigger subsidies over the year. People can reduce these uncertainties by updating their information if and when their income changes. 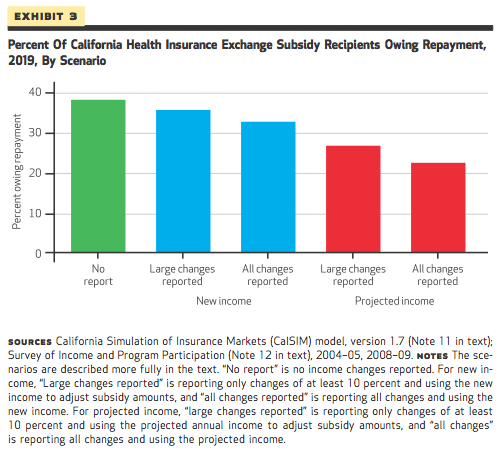 The health law places limits on how much tax credit reconciliation could slam most enrollees. The limit ranges from $600 for low-income families up to $2,500 for those who earn more. Though capped, these sums still represent substantial financial shocks to low-income families.

"From Jackson Hewitt's perspective, the repayment liability caps do offer consumers some level of protection and predictability," Brandes said. "We have some sense of the order of magnitude that this is going to have on our customers."

"things can be done to reduce taxable income. There's a role for the tax-preparing industry here, in terms of good planning."

But if income for the year was over 400 percent of the federal poverty line (about $95,000 for a family of four), the family is obligated to repay the subsidy in its entirety when filing taxes.

"One number in that study that really jumps out: 19 percent of households between 250 and 400 percent of the federal poverty line could wind up above that 400 percent threshold, which means the caps wouldn't apply to them. Then they're on the hook for the full face value of the tax credit," Brandes said. "That's one group where we're paying particular attention."

Perhaps softening the impact, repayments owed for overly-generous subsidies would take the form of lower tax refunds for many families.

"Having to repay a health insurance exchange subsidy might not necessarily mean that money will be owed to the IRS," the Health Affairs authors write. "Of the 132 million Americans who filed income tax returns in 2009, 83 percent received refunds, and 17 percent owed additional taxes."

Enrollees can help by updating their information when their income changes

"All of this illustrates how challenging it is to subsidize health insurance for low- and middle-income families through the tax system," said Larry Levitt, a vice president at the Kaiser Family Foundation.

The best thing for individuals and families to do is update their information within the health insurance exchange as soon as something changes. They have to do that through the actual exchange interface — which will have a section for changes in income or family circumstances — not through their insurer. Instructions for updating information on Healthcare.gov can be found here.

If people reported their income changes to insurers and had tax credits adjusted in a timely fashion, the number of people owing repayment would fall by 7 to 41 percent, and the size of the average repayment could be reduced by up to 61 percent, authors of the Health Affairs report found.

40 PERCENT OF SUBSIDY RECIPIENTS DON'T REALIZE THE COST OF THEIR COVERAGE IS BEING OFFSET by federal assistance.

Enrollees can also take steps before the tax-filing process, especially if they're near the cutoff where the repayment caps no longer apply.

"There are things that can be done to change someone's modified adjusted gross income — you can make contributions to tax-preferred retirement vehicles, for example," Brandes said. "That can reduce your taxable income and push you back down into the tax credit range that allows you to benefit from the cap. There's a role for the tax-preparing industry here, not just in doing the reconciliation but also in terms of good tax-planning."

The key to smoothing these problems is education and outreach, but that's easier said than done. According to recent polling from the Kaiser Family Foundation, an estimated 40 percent of people receiving insurance subsidies don't actually realize the cost of their coverage is being offset by financial assistance from the federal government.

According to the same poll, over half of enrollees who did report receiving subsidies are concerned that their income will change and they will no longer be eligible for this financial help.