Share All sharing options for: "The shooting of Michael Brown was the final straw for people in Ferguson"

The anger behind Ferguson's response to the shooting of Michael Brown is not new. The killing of an unarmed black teenager at the hands of a police officer was the final straw in a stack of racial tensions that have been building up for years. Although there was some looting the day after Brown's death, the protests have been characterized by peaceful demonstrations and tense standoffs between angry, but nonviolent, protestors and heavily armed police.

Darnell Hunt, UCLA professor and director of the Ralph J. Bunche Center for African American Studies, has been studying these types of events for decades — going back to the Los Angeles riots of 1992, which followed the videotaped beating of Rodney King. I spoke with Hunt by phone on Wednesday to get his take on what's now happening in Ferguson.

German Lopez: What leads to events like the protests in Ferguson?

Darnell Hunt: An event like Michael Brown's shooting does trigger it, but it's typically the pressure or tension that has been building up for years prior to the event that is the ultimate cause. There's usually a range of different factors that are involved that motivate people to essentially take to the streets.

Although black people made up 67 percent of Ferguson's population in 2013, they made up more than 93 percent of arrests carried out by Ferguson Police that same year.

My understanding of Ferguson is that there have been longstanding issues with the police, which is pretty typical of largely minority communities and their relationships with police forces. African Americans in particular are pretty severely underrepresented among police officers, so there's a standoff attitude between police and the communities.

There's other factors as well. This tragic incident comes on the heels of what happened with Trayvon Martin and some of the other high-profile cases in recent years. These cases really drove home the point for people in these communities that black life is not considered as sacred as it should be.

So people are taking to the streets to protest the way this all happened.

In some ways, it parallels what led to the Los Angeles riots. The Rodney King beating and the verdict that exonerated the officers for the most part triggered it, but broader factors played a role.

GL: If you look at the past year, there's a lot of news coverage about racial tensions between the criminal justice system and minority communities. Do you think the buildup of these cases in our collective consciousness is one of the causes of protests?

The most obvious and immediate cause was what happened with Michael Brown. But prior to that, you have all these other events going on that create this widespread awareness that there are injustices that are aimed particularly at African American male youth.

If you think about the incidents in Florida — not just Trayvon Martin, but incidents like the killing of teenager Jordan Davis as well — they didn't fault the police directly, but they represent this whole idea that black male youth constantly represent a threat to police and deadly force can be used to keep them in check, even if they're unarmed.

The events in Missouri speak to that. All these cases contributed to the buildup of tensions. The shooting of Michael Brown was the final straw for people in Ferguson.

GL: We seem to hear more and more about these sorts of incidents. Why do you think that is? Is it increased media awareness, or are they happening more often?

DH: It's hard to say definitively.

Rewinding back 20-plus years, what was significant about the Rodney King case is it happened at the beginning of the video camera era in which the typical person might have a video camera and capture what was happening. What happened to Rodney King wasn't unusual — in the sense that people in black communities have been complaining for years about police profiling and brutality. What was significant about Rodney King is it was captured on video, and the whole world saw it. Most people who saw the videotape assumed that the officers were going to be found guilty of something.

That was what was new about it: the video was available, a local TV station picked it up, and it went viral. In that sense, media coverage and the availability of images showing what's happened definitely plays a role. It convinces people it actually happened, as opposed to having to wonder whether personal accounts of what happened are accurate.

Whether or not we could argue that what's happening lately is more an artifact of the media being engaged with this topic or theme, I'm not sure. I think there is something happening socially as it relates to black male youth and the way they've been vilified over the past few decades through the war on drugs and war on crime. There's a real sense they're seen as the prototypical threat that needs to be contained. That's real, not just a product of media coverage.

But when you combine those trends with more availability of media and news through the internet, you have the perfect storm. People are acutely aware of what's happening, and every injustice becomes another block in this edifice of understanding what's so wrong in America as it relates to race.

GL: With all those factors building up, do you think people are reaching a boiling point when it comes to racial disparities in the criminal justice system?

Residents were frustrated by the police presence in their neighborhood on August 11, but they kept their hands up. (Scott Olson / Getty Images)

DH: I think people are getting fed up. In a place like Ferguson, it hit close to home. It was one of their own. It was the local police, which had issues for years.

Who knows how it will this all play out? There haven't yet been the same kinds of protests in other parts of the country that you see around St. Louis.

That said, the Trayvon Martin incident led to protests around the country. Not only was this something that affected people across the country, but other people realized that the fate of Trayvon was possibly the fate of their own sons.

I think most people around the country — African Americans in particular — empathize with the people of Ferguson and the family of Michael Brown. They understand this is something that all black people have to fear — being profiled and possibly killed in a very unjust way.

GL: Do you think these events will lead to a new movement across the country?

DH: It's hard to say whether this is a continuation of growing resentment or if this a different phase. We have a black president who himself has articulated what these events show about where we are as a nation, and he says it's gotten better.

But in some ways I would argue things are getting worse, because the disparities continue and some have gotten worse since the Great Recession.

Rodney King in 2012, two decades after the riots sparked in part by the videotape that showed LAPD officers beating him. (Kevork Djansezian / Getty Images News)

The racial disparities in incarceration are still huge. I know the Obama administration reduced disparities between crack cocaine and powder cocaine sentencing to level the playing field a little bit in terms of incarceration.

But the disparities are still real and huge.

GL: Do you think one of the problems is that even though Americans recognize all these issues, not much happens to fix them?

DH: That's a huge part of it. What will ultimately shape the way this unfolds is what the response will be to the protests and the incident. Will justice be served? Will real attempts be made to alter the relationship between the police and the community?

Ultimately, that's what happened in Los Angeles. We're far from a perfect relationship between LAPD and local communities. But surveys from right before the 20th anniversary of the LA riots showed that police-community relationships have improved. Most people in Los Angeles think LAPD is doing a better job. Black people tend to be the least trusting, but their level of trust is higher than it was 20 years ago.

That's due to a lot of turmoil the LAPD went through. They went through a handful of police chiefs. They had changes in the police commission. They tried to move more toward community policing models.

Again, the LAPD is not perfect; there's still issues — the Christopher Dorner case brought up some of those issues — but it's better than it was. For the most part, you don't hear police chiefs saying things like Daryl Gates did when he was chief during the Rodney King beating, basically vilifying black communities.

The same kind of changes have to happen in Ferguson as well for there to be any real healing.

GL: Do you think economic factors have played a role as well?

DH: Absolutely. The economic disparities are huge. If you look at who was affected by the recession, minorities were hit particularly hard. It contributes to the sense that the system is stacked against minorities. 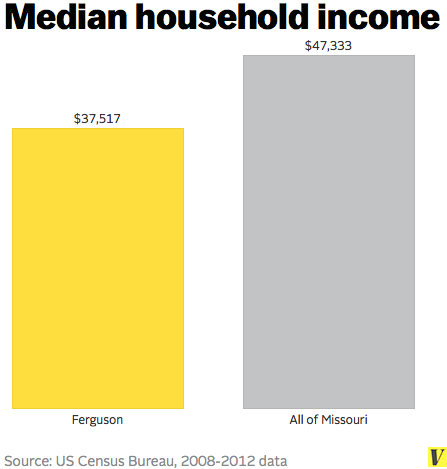 GL: It's easy for some people to see some of the bad events in these protests, like the looting of a convenience store, and blame the protests on immoral behavior. Do you think that ignores the history behind these issues?

President George H.W. Bush called the Los Angeles riots "the brutality of a mob, pure and simple." That minimized the role the economy and the government played in the crisis. It was taken as a slap in the face by most people here in Los Angeles who felt passionately about the injustice of the day.

That kind of response just fans the fires. It doesn't extend the olive branch to those in the community who feel alienated and disaffected. You have to go beyond the symptoms and look at the causes, and the causes run quite deep.

To learn more about race disparities and the events in Ferguson, read the full explainer, Vox's timeline, and watch the two-minute video below:

By Peter Kafka and Rani Molla