Obama’s critics are suddenly sure Hillary Clinton is great

Share All sharing options for: Obama’s critics are suddenly sure Hillary Clinton is great

In 1988, the BC show "Yes, Minister" outlined Politician's Logic. It goes like this:

1. We must do something.

There is, however, a reverse of Politician's Logic, which might be called Pundit's Logic. It goes like this:

3. We should have done the other thing!

When it comes to looking back on the disappointments of Barack Obama's presidency, the "other thing," particularly this week, is elect Hillary Clinton.

For instance, Megan McArdle writes that "when Obama beat Hillary, we all lost." The basic argument is that if Hillary Clinton had won in 2008, "at the very least, she would not be facing the same level of vehement opposition in Congress." This is because, McArdle says, the emotional engine of the Tea Party was Obamacare, and Hillary Clinton would have spied the intensity of Republican opposition to health reform and turned back.

"So there's my counterfactual for the summer," McArdle concludes. "If Hillary Clinton had won, Obamacare wouldn't have happened, and Democrats — and the country — would be better off." (Curiously, there is no mention of the millions of people who gained or will gain insurance through Obamacare, most of whom would presumably be much, much worse off in this counterfactual.)

Is McArdle right? Maybe! But it's a perfect reversal of the argument Clinton's supporters made on her behalf in 2008. Back then, the case for Clinton was that she understood full well that doing big things would mean fighting — and winning — an all-out partisan war, and that the problem with Obama was his naive insistence on bipartisanship ensured he would turn back when the partisan fury began to singe. "Anyone who thinks that the next president can achieve real change without bitter confrontation is living in a fantasy world," wrote Paul Krugman in a 2007 column criticizing Obama.

Meanwhile, the argument for Obama was precisely that Republicans hated him less than Clinton, and so a vote for Obama was a vote for a less partisan future. "Clinton will always be, in the minds of so many, the young woman who gave the commencement address at Wellesley, who sat in on the Nixon implosion and who once disdained baking cookies. For some, her husband will always be the draft dodger who smoked pot and wouldn't admit it. And however hard she tries, there is nothing Hillary Clinton can do about it," wrote Andrew Sullivan in an essay endorsing Obama. Sullivan went on to note that "polling reveals Obama to be the favored Democrat among Republicans."

All of which is to say it is very easy to imagine a world where Hillary Clinton won the election, party polarization is as bad or worse than it is today, and pundits are looking back to 2008 and wishing Obama had won. 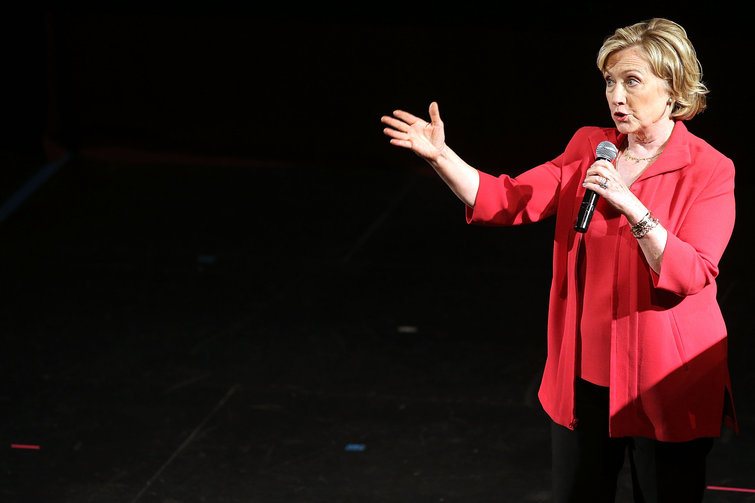 The same is true for the argument between Clinton and Obama on Syria. There, the issue is that Syria continues to be an absolute human disaster: more than 160,000 have died in the country's civil war, and the radical, brutal group ISIS fought through the chaos and built a powerful statelet that they used as a base of operations to expand into Iraq. So the question is: could America have done more?

Inside the administration, Clinton was an advocate of doing more, and doing it earlier. In particular, she wanted to try and identify, train and arm more moderate factions of the opposition. She lost that argument, and it's a loss that she and her supporters emphasize today. The idea is that if Clinton had won — if Obama had feared the risks of inaction more than the risks of action — then Assad might have been ousted by now and ISIS might never have gotten their foothold. The conservative Weekly Standard found this so self-evident that their editorial this week is nothing but edited excerpts of Clinton laying out her foreign policy differences with Obama.

Inside the administration, Clinton was an advocate of doing more, and doing it earlier

There's a part of Clinton's comments on Syria that they leave out, however. "I can't sit here today and say that if we had done what I recommended, and what [Ambassador] Robert Ford recommended, that we'd be in a demonstrably different place," she told the Atlantic's Jeffrey Goldberg (the aggression of Clinton's criticisms of Obama has been wildly played-up by the media). And then there's the possibility that we would be in a different place — a worse one.

America does not have a very successful record arming insurgent groups. As political scientist Marc Lynch concludes in a review of the relevant literature:

In general, external support for rebels almost always make wars longer, bloodier and harder to resolve (for more on this, see the proceedings of this Project on Middle East Political Science symposium in the free PDF download). Worse, as the University of Maryland's David Cunningham has shown, Syria had most of the characteristics of the type of civil war in which external support for rebels is least effective.

Pundits have no choice but to consider counterfactuals; there's no other way to think about the world and the choices America makes within it. The problem is when the counterfactual is used less to evaluate reality than to lament it.

The fact that something turned out badly often means that it's a hard, and sometimes impossible, problem to solve. George W. Bush ran as a uniter and Barack Obama ran as a post-partisan and each sincerely hoped to heal the widening divisions in American political life, but those divisions are widening because of powerful structural factors that easily overpowered, and ultimately co-opted, both men's presidencies. Syria is a hellish problem that America very likely can't solve.