Meet the Inhumans, the next superhero group Marvel wants you to love

Share All sharing options for: Meet the Inhumans, the next superhero group Marvel wants you to love

Marvel will sleep when it's dead.

On the winter finale of Marvel's Agents of S.H.I.E.L.D.,  audiences were left with a potent signal that Marvel was ready to introduce the world to the Inhumans, a race of superheroes with fantastic powers. Two characters transformed into Inhumans — a sign that the company is paving the way for the the 2018 Inhumans movie.

But what exactly is an Inhuman? What role do Inhumans play in the Marvel Universe? Here's a brief primer:

What is an Inhuman?  Who are the Inhumans?

The Inhumans are a race of beings with superpowers that were created when an alien race called the Kree (Ronan the Accuser, the main villain in Guardians, is a Kree) experimented on Earth's early humans. They first appeared in Marvel's Fantastic Four #45 (1965) and were created by legendary comic artist Jack Kirby and Stan Lee.

Inhumans get their powers when they're exposed to a substance called Terrigen Mist. After being exposed to this substance, they gain new abilities, but sometimes the risky process leaves them with deformities. In a sense, they're probably more like the X-Men than they are The Avengers because of this process: Inhumans, like X-Men's mutants, have a common background story about their powers.

The most prominent Inhumans in the Marvel universe are a royal family: 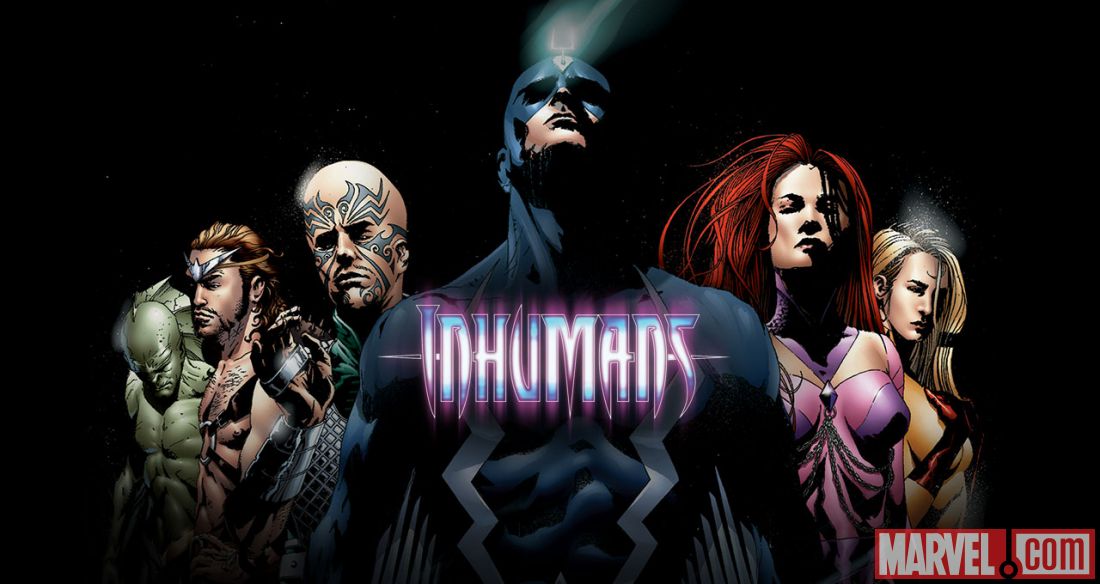 What kind of cool stuff have the Inhumans done?

Well, Black Bolt once possessed an Infinity Gem (those glowing stones from so many Marvel movies). He's also part of Marvel's Illuminati, a group that has included heavy hitters like Tony Stark, Fantastic Four's Reed Richards, Dr. Strange, Namor, and X-Men's Charles Xavier Also, Medusa's weave is pretty awesome. According to Marvel, she can whip it faster than the speed of sound:

Why do they matter?

At the time Marvel introduced the Inhumans, most of the company's superheroes were from Earth and fought there. The Inhumans weren't, giving Marvel the chance to build a new world. "With the introduction of the Inhumans, it was suddenly apparent that the Marvel Universe was infinite, and there could be whole civilizations in every corner of the entire cosmos," Sean Howe, the author of Marvel Comics: The Untold Story, wrote.

As each issue tumbled into the next, picking up momentum, expanding the cast, the grand space opera absorbed forgotten characters and established the relationships between them all.

Though the Inhumans represented this new world for Marvel, it took a bit for them to finally get their own comic. Martin Goodman, Marvel's publisher, kept delaying the book and instead stuffed them into an anthology called Amazing Adventures that they shared with Black Widow.

The Inhumans haven't had the longevity or loyal fanbase that characters like the X-Men, The Avengers, or DC's Justice League enjoyed. And the current Inhumans comic book debuted in April to underwhelming sales, barely cracking the top 20 of comics sold in North America.

Yet the Inhumans are major players in Marvel's comic universe right now. The company recently finished a major crossover event called Infinity, where a Terrigen Mist bomb detonated and spread the substance all over Earth, creating countless numbers of Inhumans. The Inhumans' increased prominence curiously comes at a time when the X-Men are slightly fading. For the past few years, there's been a stream of talk about Marvel downplaying the X-Men because it doesn't own the mutants' movie rights. If Marvel wants a team that can explore the same themes as the X-Men, the Inhumans seem to be tailor-made for that purpose.

So, they're in space? Does this mean they're going to hang out with the Guardians of the Galaxy? Have they run into Thanos?

The Inhumans do present an opportunity for a crossover with the Guardians. Purely considered from a movie standpoint, the Inhumans could be part of Marvel's plan to build out its cosmic universe. A cameo or two in the 2017 Guardians sequel could set the bones for something bigger for the Inhumans. And yes, the Inhumans, like the Guardians, aren't big fans of Thanos: 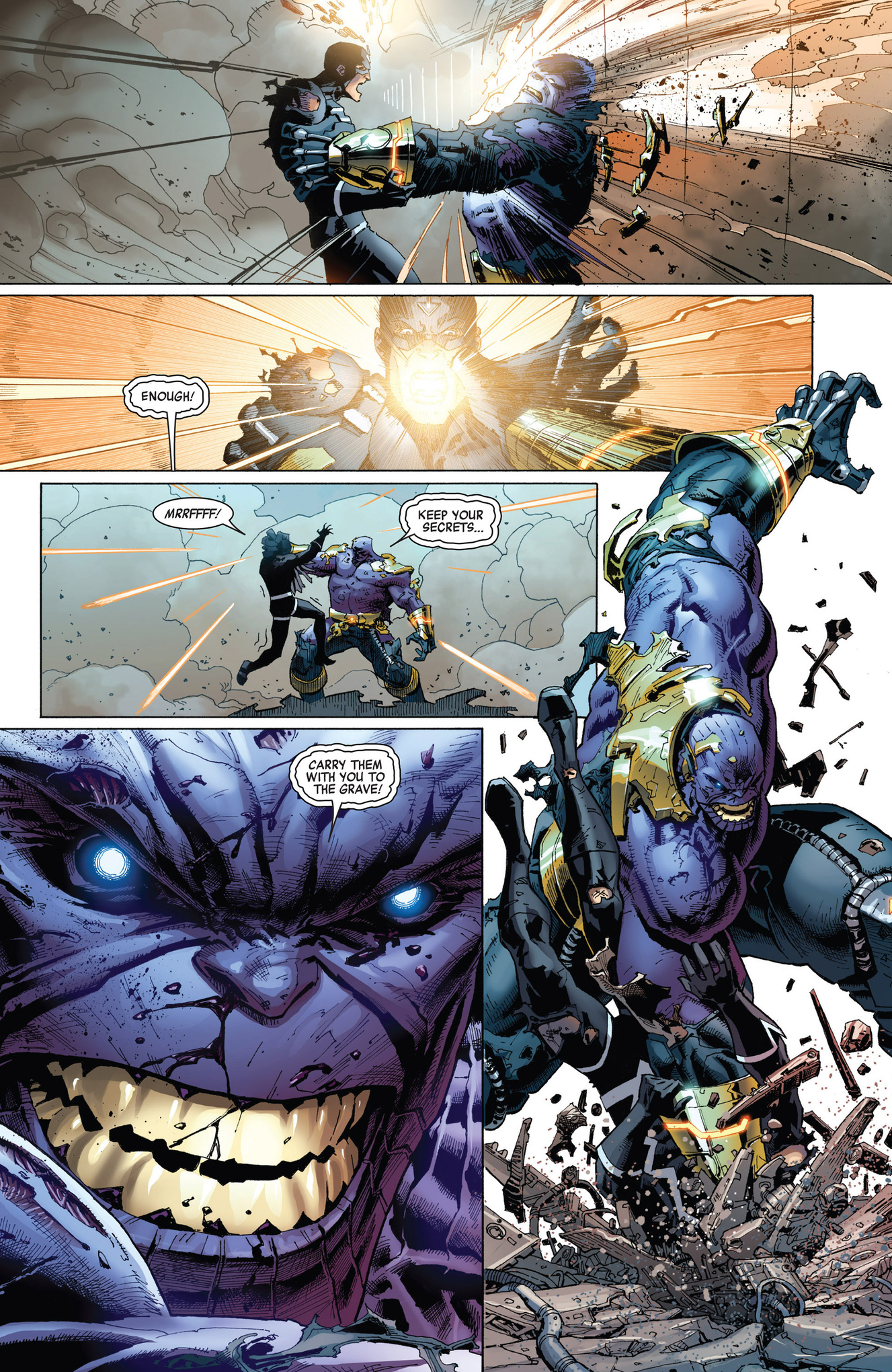 The way the Inhumans were written and Kirby's intention for them probably varied quite a bit. Because Kirby left before they got their own book, and returned to Marvel shortly before the Inhumans book ended its run, he didn't really get the chance to use the characters he originated (Kirby was working on several other titles like Captain America). Kirby had a vision for the future of comics that was steeped in allegory and using comics to send political, social, and economic messages. His images and his stories were imbued by his real-life experiences. Kirby once said that the fighting he drew on pages, was inspired by growing up on the Lower East Side and seeing gang fighting break out on the fire escapes above the city. Howe captured one of Kirby's more poignant speeches to a group of convention attendees:

Instead of being vessels for Kirby's vision of socio-economics and politics, the Inhumans, like many other superheroes at the time, were used to spread public service announcements — an action in the same vein of Kirby's credo to spread a message through comics, but not exactly what he intended (io9 has a good roundup). Instead of tackling complex issues and presenting them in elevated ways, superheroes were used to spread literal messages about landmine awareness, reporting child abuse, and seatbelt safety.

Today, Marvel is doing something more interesting and possibly more in line with Kirby's original vision. In the Infinity storyline and its follow-up comic, Inhumanity, one of the most pronounced themes is that of immigration and the assimilation conflict and xenophobia that come with it. The Inhumans' home base of Attilan is destroyed, forcing them to flee to Earth. Everything they achieved, the positions they held, and the status they possessed on their home planet now mean absolutely squat. The Inhumans, including the Royal Family, are seen as threats and outsiders. 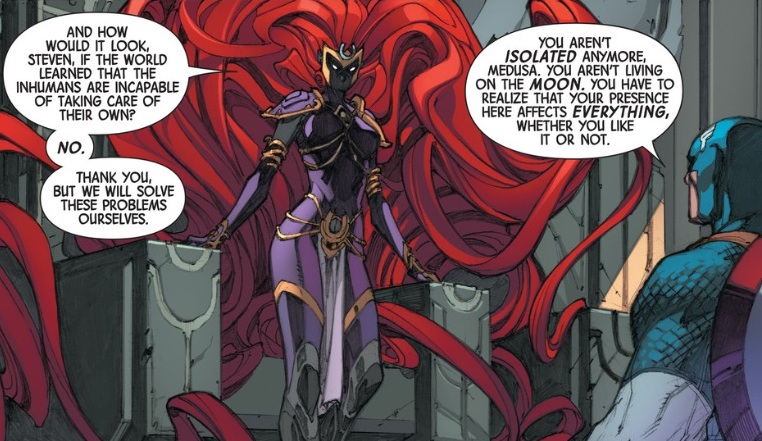 On the other side of that, there are a bunch of dormant Inhumans on earth whose powers and mutations are being triggered by the the exposure to the Terrigen Mist. They aren't choosing to become Inhuman; they're born this way. That allows for complex storytelling about race, sexuality, identity and community: 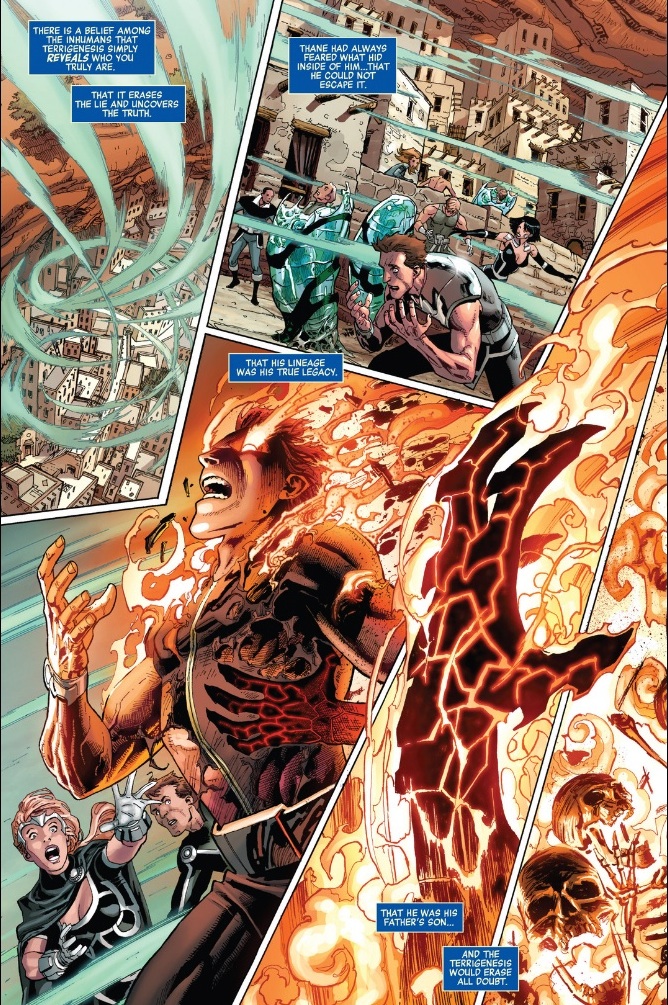 The Inhumans won't get a movie any time soon. Marvel has a full plate with Avengers: Age of Ultron, Ant-Man, another Captain America movie, and a Guardians sequel all coming within the next three years, to say nothing of the long-rumored Dr. Strange film. Consider Guardians: the whispers for that film began in 2010 and were confirmed in 2012.

Marvel saw a bold rise in sales of Guardians of the Galaxy comics when it confirmed it was working on a movie. Marvel probably wouldn't mind seeing a similar boost for the Inhumans' comics, with talk of this movie.

That said, if whispers now are popping up now, an Inhumans blockbuster is probably several years away, no matter what Vin Diesel or Stan Lee tell you. 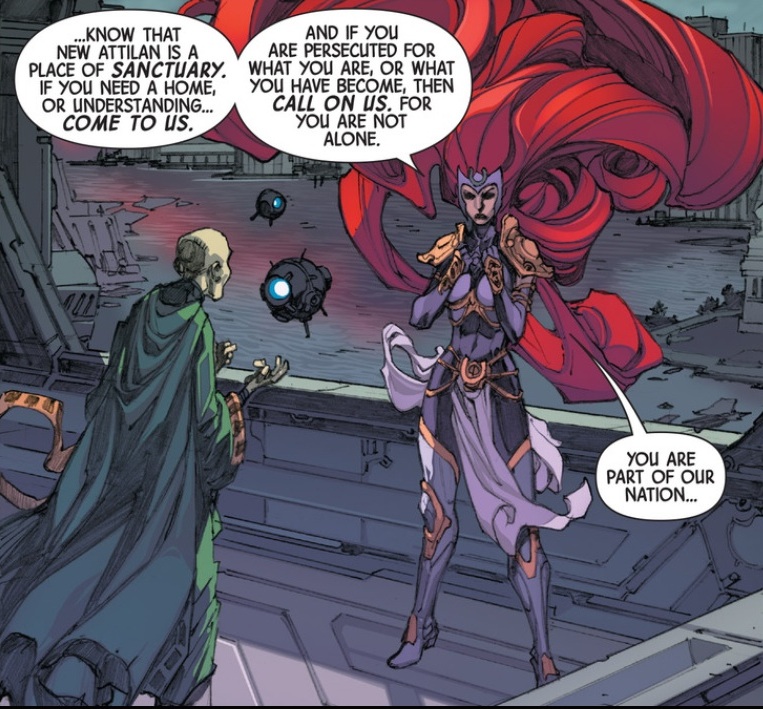