Do revolving doors actually save energy?

Share All sharing options for: Do revolving doors actually save energy?

Many big, public buildings have revolving doors at street level. For a lot of people, these doors are a little more annoying to use than normal "swing" doors, leading them to ask the question — are revolving doors really more energy-efficient?

The short answer: yes, they are.

Although there hasn't been a ton of recent research comparing the energy costs of each type of door, the work that has been done is pretty definitive that revolving doors save energy. It varies widely based on the building, climate, and amount of use, but one MIT study found that having everyone use revolving doors on a campus building would save about 1.5 percent of the total energy needed to cool and heat that building annually.

On a single use basis, that works out to about 36 watt hours of energy saved each time you choose revolving over swing doors — the energy needed to run a 60-watt lightbulb for a little over a half hour.

Revolving doors can also be a pain to use: the same study also found that most people avoid them because of the extra effort and time involved. But if you happen to be of the mindset that your personal choices can have some positive impact on the environment, it makes sense to put the use of revolving doors in the same category as, say, recycling — a simple, painless choice that provides modest environmental benefits.

How revolving doors save energy

The revolving door was invented way back in 1881 by a German man named H. Bockhacker as a "door without draft of air." It's basically a series of panels (nowadays, typically four) that rotate to allow people to enter and leave a building without leaving a big opening exposed, which would allow air to rush in or out. Revolving doors still let small pockets of air to escape with each revolution — and older ones with decaying seals allow air to seep out above and below them as well — but on the whole, they permit much less airflow.

An illustration from the original American patent for a revolving door. (Theophilus van Kannel)

Although several experiments measuring just how much energy is saved were done historically, the only recent one conducted on modern revolving doors was the 2006 MIT study. As part of it, engineers calculated how much air flowed out of the revolving doors of one particular building on campus, and compared it to airflow from the building's conventional doors.

A single pass through the swing doors, it turned out, allowed about eight times more air to flow in or out of the building than a pass through the revolving doors. The ultimate energy cost of heating and cooling this air this varies widely by season, but the researchers calculated that if every single person who used the building over the course of a year entered and left through the revolving doors, it'd save nearly 80,000 kilowatt-hours of energy, compared to the current usage (in which about 23 percent of people use them).

if everyone used the revolving door, it'd save about 1.5 percent of the energy used to heat and cool the building

This equals about 1.5 percent of the total energy used to heat and cool the building. These savings, they calculated, would lead to a 14.6 ton reduction in carbon dioxide emitted. For reference, the average American emits about 17.6 tons annually across all his or her activities.

Of course, all these energy savings would be distributed across the thousands of people who use this large building over the course of a whole year. So how much energy can you save by a single use of the revolving doors, versus a push of the swing doors?

So using revolving doors might not be a hugely impactful choice that can prevent climate change, but it is a modest, positive step that can slightly reduce your carbon footprint over the course of time. Although they don't really have this sort of association, we should think of revolving doors as an environmentally-friendly decision, roughly akin to recycling.

The same study also looked closely at the door preferences of people across the MIT campus — and found that, on the whole, people prefer swing doors over revolving ones.

It varied widely from building to building, but for most of them, fewer than 30 percent of people used revolving doors, opting for swing doors right next to them. When asked why, most people cited the extra effort needed to push the revolving doors. 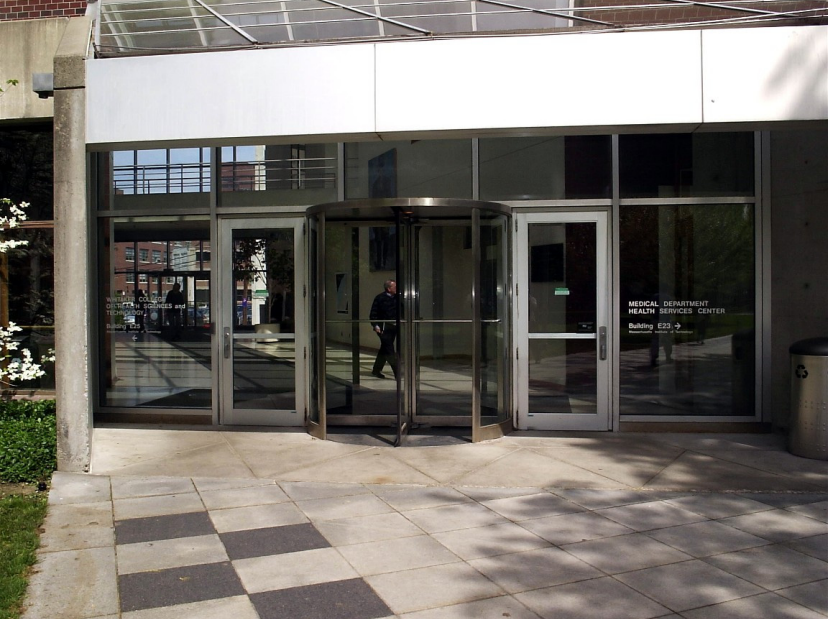 With standard setups, most people opt for the swing doors. (Cullum et al. 2006)

However, when people approached entrances for which the swing doors were tucked away — so they were basically just confronted with a revolving door, unless they looked hard for another option — habits were different.

The two buildings pictured below had revolving door use rates way up above 70 percent. Similarly, we're also much more likely to use a revolving door if we see a person in front of us use it first. In our door choices, the researchers found, we're largely creatures of habit, unconsciously choosing the obvious option

We're willing to use revolving doors, it seems, if we think it'll save energy. But most of us don't realize this is the case — or, at least, don't consciously think about it during our day. 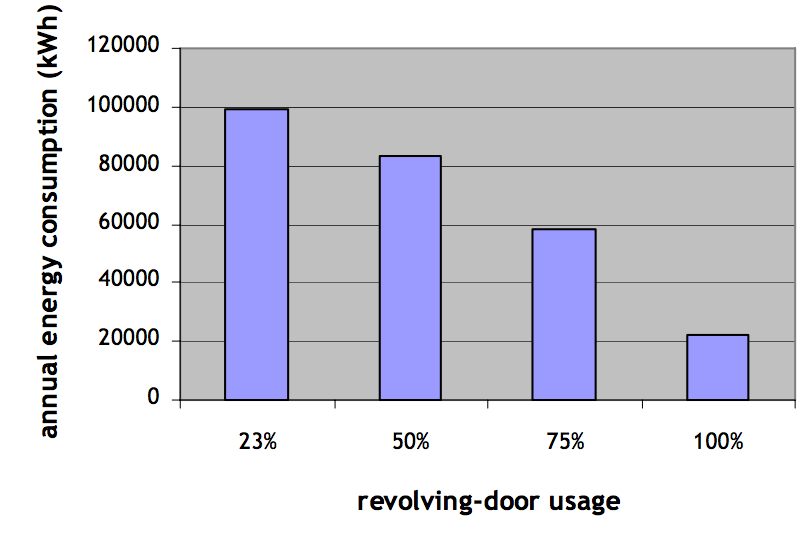 — The researchers also counted 837 passages per hour into the building, and their calculations assumed the building was open for 9 hours per day, 365 days per year, so that's a total of 2,749,545 passages.