Are Americans replacing soda with something worse?

Share All sharing options for: Are Americans replacing soda with something worse?

As public health officials and experts work to solve America's obesity and diabetes epidemics, they're increasingly turning to one ingredient as the culprit: added sugar. Despite signs that more Americans are quitting sugar-loaded soda, researchers worry the general public is still consuming too much added sugar through other means.

The Harvard School of Public Health's review of the research found that sweet drinks, which are loaded with added sugars that are separate from naturally occurring kinds, increase the risk of obesity, diabetes, heart disease, and gout. It's no surprise, then, that America's increased consumption of sugary drinks over the past few decades has closely correlated with rises in obesity and diabetes.

"Liquid sugar is a unique contributor to obesity and diabetes"

"Liquid sugar is a unique contributor to obesity and diabetes, because we digest and absorb liquid sugar much faster than sugar in solid food," explains Harold Goldstein, executive director of California Center for Public Health Advocacy (CCPHA). "If you drink a soda or any sugary drink, we absorb that sugar into our bloodstream in as little as 30 minutes. If you eat a candy bar, you have to digest that candy bar over the course of hours."

Consumers, perhaps more conscious of the risks of added sugar, have decreased the amount of soda they drink each year and report making greater efforts to avoid soda in their diets. But the most recent Beverage-Digest found that, while soda consumption is down, beverages like sports and energy drinks are on their way up.

For public health officials, the concern is these replacement beverages aren't actually healthier than soda. A recent study from UC Berkeley's Atkins Center for Weight and Health (ACWH) and commissioned by CCPHA looked at the issue.

The replacements are nearly as sugary

It would be one thing if the replacement drinks contained little to no sugar. But the replacements — fruit drinks, sports drinks, bottled tea, energy drinks — can have nearly as much, if not more, sugar than sodas, according to the ACWH study.

If someone is replacing soda consumption with fruit drinks, there's a good chance the replacement has just as much sugar: 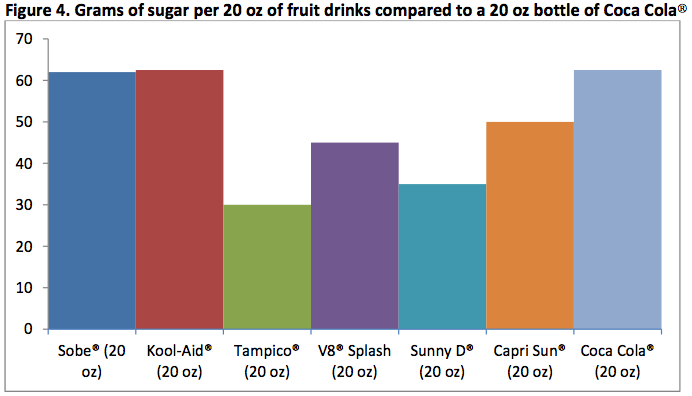 Sports drinks also have a lot of sugar, although the amount generally trends below soda: 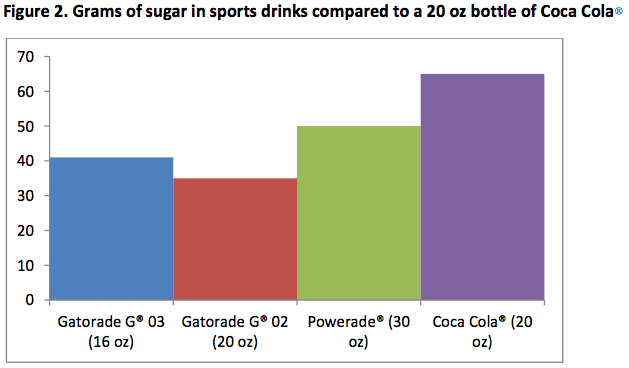 These charts show that, in some instances, the replacement beverages may contain slightly less sugar. But Pat Crawford, one of the study's authors, argues it's still more than health-minded consumers should tolerate.

"The sugar is higher than we realized," Crawford says. "And our bodies just aren't equipped for these sugar surges."

Even if other sugary beverages don't have as much sugar as soda, public health experts point to the other additives in the drinks that can be just as problematic.

Crawford says that, above all, energy drinks pose the biggest risk to public health — even more than soda. Although energy drinks don't always have as much sugar as soda, they're loaded with far more caffeine: 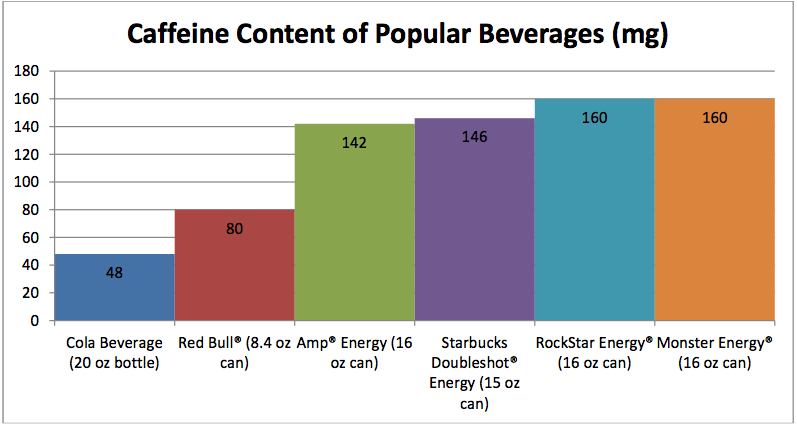 Americans tend to think of caffeine as a benign substance. Some don't even consider it a drug. But caffeine isn't harmless at children's and teens' current levels of consumption. "Kids are actually using [energy drinks] as the beverage of their choice," Crawford says.

The American Academy of Pediatrics recommends adolescents drink no more than 100 milligrams of caffeine a day. That limit is breached by one 16-ounce can of RockStar Energy, while a 20-ounce bottle of Coke wouldn't surpass half the limit.

Regularly breaching that limit, the Mayo Clinic explains, can produce all sorts of problems: insomnia, nervousness, restlessness, irritability, upset stomach, fast heartbeat, and muscle tremors. Among people with a fairly common genetic mutation that slows the breakdown of caffeine in the body, it can even increase the risk of heart disease.

"What we need to be hydrated is water"

A 2013 study conducted on rats, published in PLoS ONE, also found caffeine slows down brain development during puberty. The study's authors acknowledged that more research is needed to clarify caffeine's developmental effects on humans, but the initial findings suggest some risks toward heavy caffeine consumption among teens.

Caffeine isn't the only additive that's of concern to public health officials. "There's this whole list of crazy ingredients that have never been deemed safe by the National Institutes of Health for teens to consume at all," says Goldstein of CCPHA. "I don't think most people have any idea what these things are. They're on the package, and commonly people think, 'They must be good for me. They must have benefit. That's why they're being promoted like that.'"

These drinks are often marketed as if they're good for someone's health or as a good source of energy. Sports drinks in particular are advertised as a way for teens to replenish vital nutrients and energy. While Gatorade and Powerade can rehydrate someone and replace lost electrolytes (salts, essentially), someone would only need that kind of instant replenishment if he or she is consistently engaging in hours of rigorous exercise — a level of physical activity that is extremely rare among teens and America as a whole. 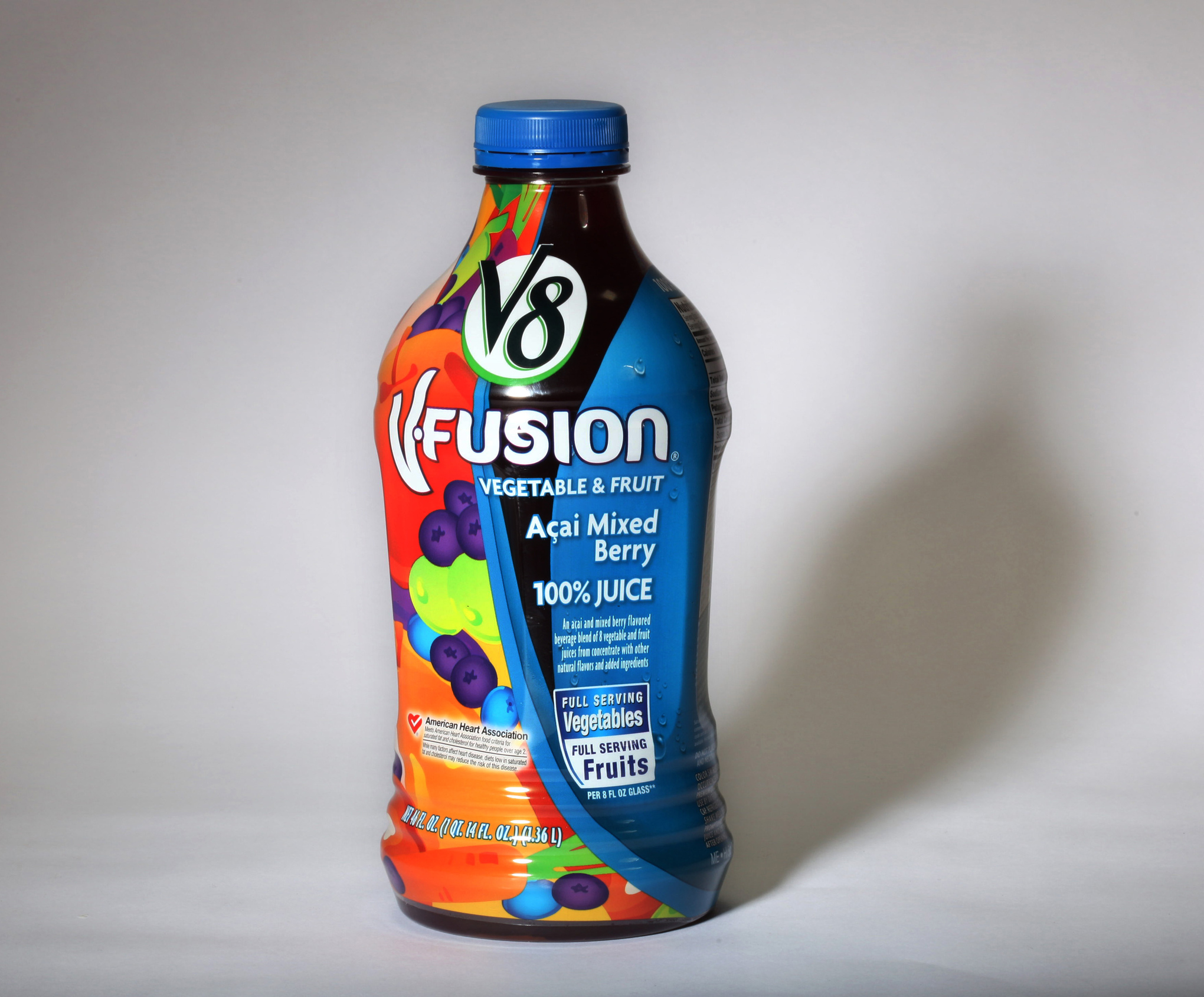 Should this get a warning label? (McClatchy-Tribune via Getty Images)

The first step toward solving the problem, researchers argue, is to get the right information to consumers. As it stands, consumers get a lot of their information from advertisements. "The claims are misleading and probably contributing to people's higher and higher consumption of these drinks," Crawford argues.

To get that information out there, Crawford and Goldstein say there needs to be more information about all these additives and clearer labeling on packaging for sugary drinks.

"As a very first step, I think the important piece is putting warning labels on those products that have too much sugar and have ingredients that are not meant for children and teens to consume," Goldstein says. "We also need to have the FDA test these additives for consumption by kids and teens, so we know one way or the other which ones are okay."

Some health experts want harsher measures. Robert Lustig, a professor of pediatrics at the University of California, San Francisco, argues sugar should be taxed and regulated like a controlled substance, because it's addictive and widely misused. "If a substance is abused and addictive and it contributes to societal problems, that's criteria for regulation," Lustig says.

Goldstein says whether to enforce those kinds of measures can be left up to individual communities. For now, his primary interest is getting the right information out there and seeing how consumers react.