Republicans want to turn Uber into a partisan issue

Share All sharing options for: Republicans want to turn Uber into a partisan issue

The RNC is up with a pro-Uber petition campaign — i.e., effort to capture emails — on its GOP.com website. Check it out: 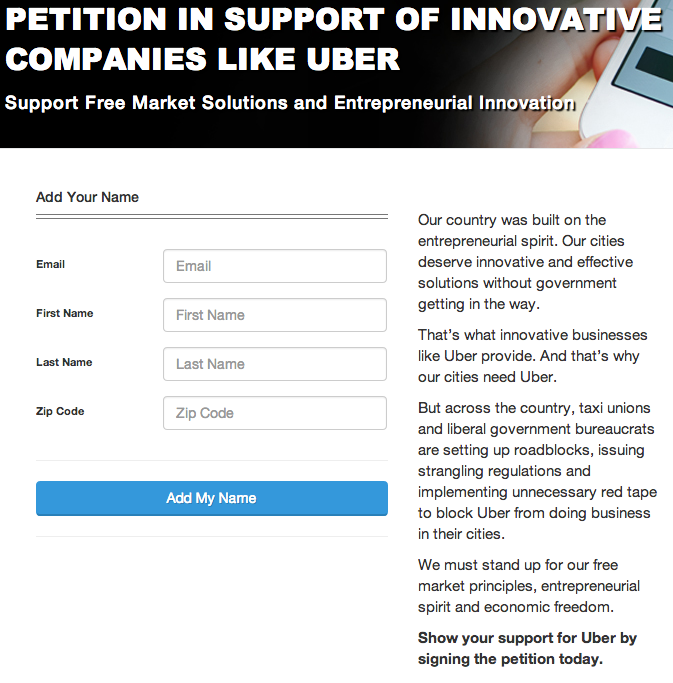 This is as smart an idea as any I've seen for Republicans trying to make some gains with the generally very-liberal under-30 cohort.

At the same time, it's fairly dangerous for Uber to find itself in the crosshairs of partisan politics. The nature of Uber's service is that its best places to do business are going to be big cities that are populated primarily by Democrats. Thus far, the company has done a pretty good job of persuading a fairly liberal predominantly urban customer base to not see taking Uber's side in a regulatory battle as necessarily entailing the adoption of a wholesale anti-regulatory ideology that puts you on the side of the people who oppose limits on greenhouse gas emissions, employment discrimination laws, or curbs on the financial services industry. If the dispute becomes assimilated to general partisan politics, that probably disadvantages Uber in key markets.

Nor is the partisan frame particularly accurate. Across the river from me in much less Democratic-leaning Virginia, Uber does a fair amount of business in the suburbs and has run into problems with the law. Moreover, in the last cycle, the Virginia Taxicab Association gave generously to both parties — $239,700 to Republicans and $167,450 to Democrats.