Gloria Tumwijuke can't forget the patient who gave her Ebola: she was a young mother, five months pregnant with another child. She arrived at the hospital on a blood-drenched mattress, blood rushing out of her eyes, nose, and ears. Gloria, a midwife, didn't suspect Ebola. She tried to save her patient and instead contracted one of the world's deadliest viruses.

Gloria is among a handful of survivors of a 2012 Ebola outbreak in the Kibaale district of western Uganda. The disease struck 11 people; four died. (Read: 17 things you need to know about the Ebola virus.)

From her home in Kibaale, she told me about what Ebola did to her body, how she beat it, and what it was like return to a community where everyone was afraid of her. Here's a transcript of our conversation, edited for clarity.

Julia Belluz: How did you come into contact with the Ebola virus?

"The mother was bleeding in the mouth, nose, and ears. They carried her into the hospital on a mattress covered with blood."

Gloria Tumwijuke: I was seeing a mother who had had a pregnancy for five months, and she came into the hospital bleeding. The mother was bleeding in the mouth, nose, and ears. They carried her into the hospital on a mattress, and the mattress was covered with blood. She couldn't talk. I was getting her history and found out her relatives had passed away, her husband died. All of her children died.

I started cleaning her, putting all the fluids in her, giving her antibiotics. After removing the fetus, she kept severely bleeding. The baby was already dead. I cared for her for six hours but eventually she died. She had Ebola. I ended up getting Ebola.

JB: Were you wearing protective gear — gloves, a gown, a mask — when you cared for this patient?

GT: When she came in, I was putting on gloves. I didn't put on boots. I didn't have a gown. I was trying to remove the placenta from her, and blood gushed on me, on my arms and body. I cleaned myself quickly because I was worried. Then I continued to help her.

I realized I didn't protect myself very well. But the mother entered into the hospital very quickly, and I had to rush quickly to help her. She was going to fall off the bed, and I was trying to support her. I didn't have time to put on my gown. This taught me to protect myself before I do any procedure. 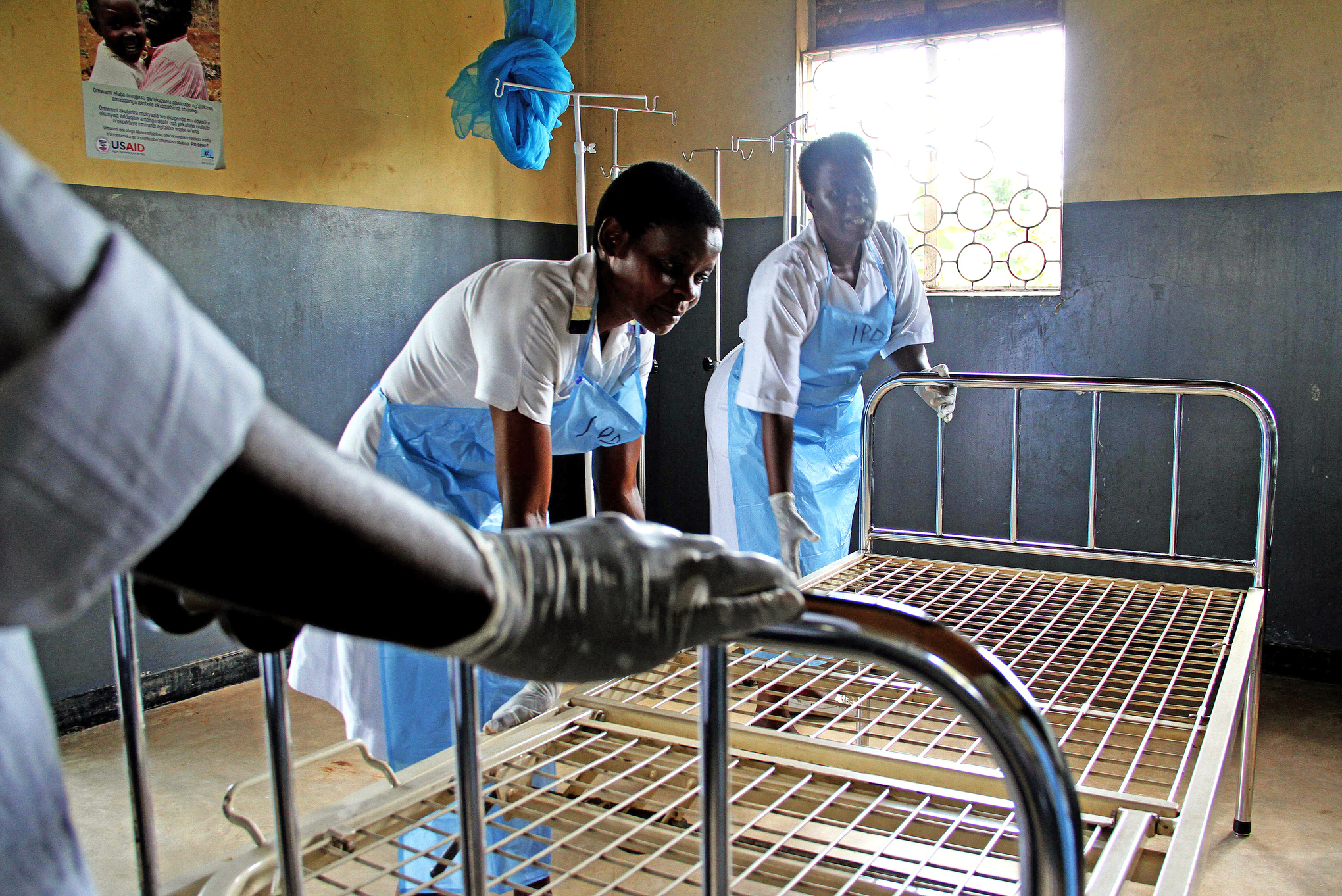 JB: At that time, did you suspect this woman might have Ebola?

GT: I didn't even know Ebola was in Uganda. At that time, Ebola had not yet been known in my region.

JB: When did you realize you had the virus?

GT: A week after my patient died, I started vomiting. I started having diarrhea and sweating. I started hearing people talk about the virus in the same hospital in which I was working. I read in the newspapers that they were talking about suspecting the virus was here. But after I saw I had all the signs and symptoms of Ebola, I remembered the pregnant lady, and she had all the signs. That's when I suspected I had the virus.

JB: What happened next?

GT: I was taken to the hospital by ambulance. They took a sample of my blood, and told me I had Ebola. They transferred me to an isolation room, and started to care for me. They put fluids in me through an IV, and gave me antibiotics. They were monitoring me frequently. I couldn't move from the bed. I couldn't talk. I couldn't do anything. I lost 25 pounds. I was in the hospital for one month when they discharged me.

JB: What were you thinking when you got the Ebola diagnosis?

JB: Did you give anyone the virus?

GT: No, no one I know got the virus. The laborers who were caring for (the pregnant woman), all of them died.

JB: When did your condition start to improve?

GT: I was discharged from the hospital after one month. After two months, I started to improve. But I still had problems. I was forgetting a lot. My hair was falling out. The hair from my head was all over. My skin was peeling off. I weighed 25 pounds less. I had heart palpitations. The hair took months to grow back. My memory was bad for one year.

"People would run away from me. They were not willing to be near me."

JB: How did people receive you when you returned to your community?

GT: They ignored me, thinking I still had a sickness because they think Ebola can't (be survived). They hide from me. People would run away from me. They were not willing to be near me. But the hospital discharged me because they were sure I was free from Ebola. I showed people  (my discharge) certificate. They started to believe I was okay. When I showed them the certificate, they started to welcome me.

JB: When your friends were avoiding you, how did you feel?

GT: I didn't feel bad because it is their right: Ebola spreads when you contact other people who have the virus. But I could feel some stigma when they ran away from me.

JB: This virus can kill up to 90 percent of those who get it. Why do you think you survived when so many others die?

GT: I had my sister who is a medical person. She could go and buy all the drugs, fluids, and antibiotics for me. She was by my side. She changed my dirty sheets. She knew how to prevent herself from getting Ebola by using protection. My husband is a nurse. He was also helping my sister to treat me and be careful. He could pray for me. When I survived he was so happy.

JB: Did you ever feel any guilt being one who lived while so many others don't?

GT: When I hear other people die, in my heart I feel like god really loves me. Because many people died and he left me in the hospital. When I'm hearing of other people dying, I feel bad. I feel like maybe I lived because I had a lot of help. I had IV fluids. My heart tells me maybe if those people could have good nurses who can offer their services, maybe those people really can survive.

JB: Have you experienced any long term side-effects from the virus?

GT: Actually I'm good. I don't have any problems. After four months I was back to normal. The thing that persisted for the whole year, it was forgetting. My memory was bad. Also I couldn't resume my period for five months.

JB: In this current outbreak, a lot of health-care workers have died from Ebola, and now there's fear and people are walking off the job. What advice would you give to other health workers in an outbreak?

GT: When you put on protective gear and you're not in direct contact with the person's (bodily fluids) you can treat them and they get better. People need to understand that because, if we didn't have health-care workers who help us, who didn't run away, what would we do?

JB: How are you feeling when you read the news about this outbreak in West Africa?

More: Watch this video about what it's like living in Sierra Leone right now and read our full explainer: 17 things you need to know about the Ebola virus.

Ishmeal Alfred Charles, who lives in Freetown, Sierra Leone, explains how the Ebola epidemic has transformed life in his country.