A fierce fight over a new wave of abortion regulations is quickly rising through the federal courts — and experts say it could land in front of the Supreme Court as soon as next spring.

"What's being set up really nicely here is a circuit split, which could mean that the Supreme Court would be asked to weigh in on this issue," says Denise Burke, senior counsel at the anti-abortion Americans United for Life.

The battle centers on admitting privilege laws, which require providers to gain the right to admit patients at a local hospital in order to perform abortions. The laws aren't new, but they've recently become much more common: nine states have passed this type of requirement since 2011. Some of these laws have, or could, lead to clinic closures if local hospitals refuse admitting privilege applications.

Courts have issued conflicting decisions about whether these laws are a constitutional way for states' to protect women's health or an unconstitutional overreach that unduly burdens women — setting up a divide that the Supreme Court may ultimately settle.

1) Admitting privilege laws are not new

In 1986, Missouri passed the country's first law requiring abortion providers to have admitting privileges at a nearby hospital. A women's health clinic in suburban St. Louis challenged the law in 1988 as a violation of Roe v. Wade, the Supreme Court decision 15 years prior. The case centered on a Peruvian doctor, who maintained admitting privileges in his home country but not in Missouri and argued that the law significantly reduced his patients' access to abortion.

The Eight Circuit Court of Appeals ruled against him and upheld the admitting privilege law. The court argued that there were plenty of other abortion providers — some of whom worked in the Peruvian doctor's own clinic — who could still terminate pregnancies. And that meant the law did not substantially burden women's access.

The plaintiff's case, the judges wrote in Women's Health Centers of West County v. Webster, "does not show that his present inability to perform abortions in Missouri has prevented any woman from effectuating her decision to obtain an abortion."

Since the Missouri case, access to abortion has declined. There are fewer abortion providers and clinics and that, Guttmacher Institute's Elizabeth Nash argues, changes the landscape for courts.

"Right now, we're in a climate where there aren't very many abortion clinics," says Nash. "Unlike with Missouri, some of these admitting privilege laws mean clinics will close if the law goes into effect."

Missouri's law remained a rarity for nearly three decades. Utah did pass a similar regulation in 1998 but after that, states left the issue untouched for 23 years.

In 2011, Kansas revisited the issue; Republican Gov. Sam Brownback signed a law on May 19 that required all abortion providers to have admitting privileges at a local hospital.

Other states followed suit: since then eight states have passed laws with similar language. Burke, whose group has written model admitting privilege language that states can use, says some of the interest was driven by the controversy over Kermit Gosnell, a Philadelphia abortion provider convicted in May 2013 of murdering three babies in his clinic.

"That got legislators looking into this industry's track record, and seeing a need for more regulation," Burke says.

Most of these laws typically require abortion providers to have the ability to admit privileges at a hospital either described as "local" or "within 30 miles of the abortion clinic." 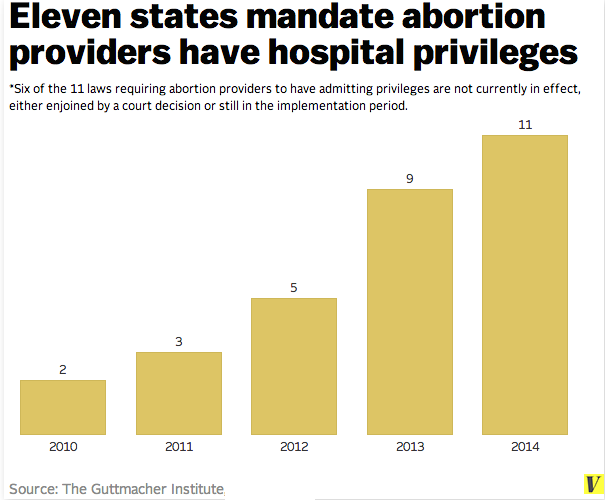 Five of these laws — the two old laws from Missouri and Utah, alongside new restrictions in North Dakota, Tennessee, and Texas — are currently in effect. In those five states, any abortion provider must now have admitting privileges at a nearby hospital.

Four states — Alabama, Kansas, Louisiana, and Mississippi — have laws that are on hold pending the outcome of court decisions. The other two laws, in Louisiana and Oklahoma, were just passed this spring and are still in planning stages. The Louisiana law is slated to take effect on October 1, followed by Oklahoma's regulation on November 1. 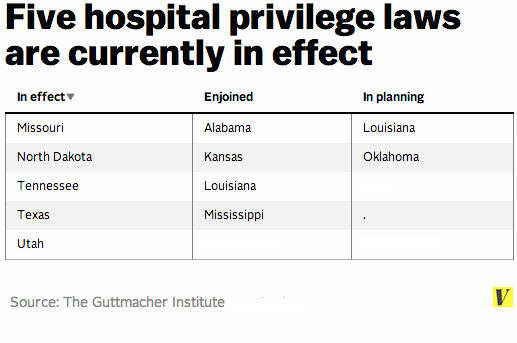 3) These laws have lead to abortion clinics closing

After these laws have passed, some clinics closed as their doctors were unable to find a hospital that would allow them to admit privileges. In Mississippi, for example, two doctors who work at the state's only abortion clinic applied for privileges at seven local hospitals— and were rejected at all (the clinic is still open after a recent court decision, more on that below).

In Texas — where an admitting privilege law is in effect — multiple clinics have closed after hospitals refused to grant them access. Many of these clinics are in West Texas and in the Rio Grande Valley, the southernmost tip of the state. You can see the ones that have shut their doors in this gif from Mother Jones.

It's hard to say how many of those Texas closures are due to the admitting privilege restriction, which was part of a suite of other abortion regulations. Clinics, for example, must be certified as ambulatory surgical centers, and some have cited that requirement as the reason for their closure. There are at least some clinics, though, that have cited their inability to get admitting privileges as the reason their doors will shut. 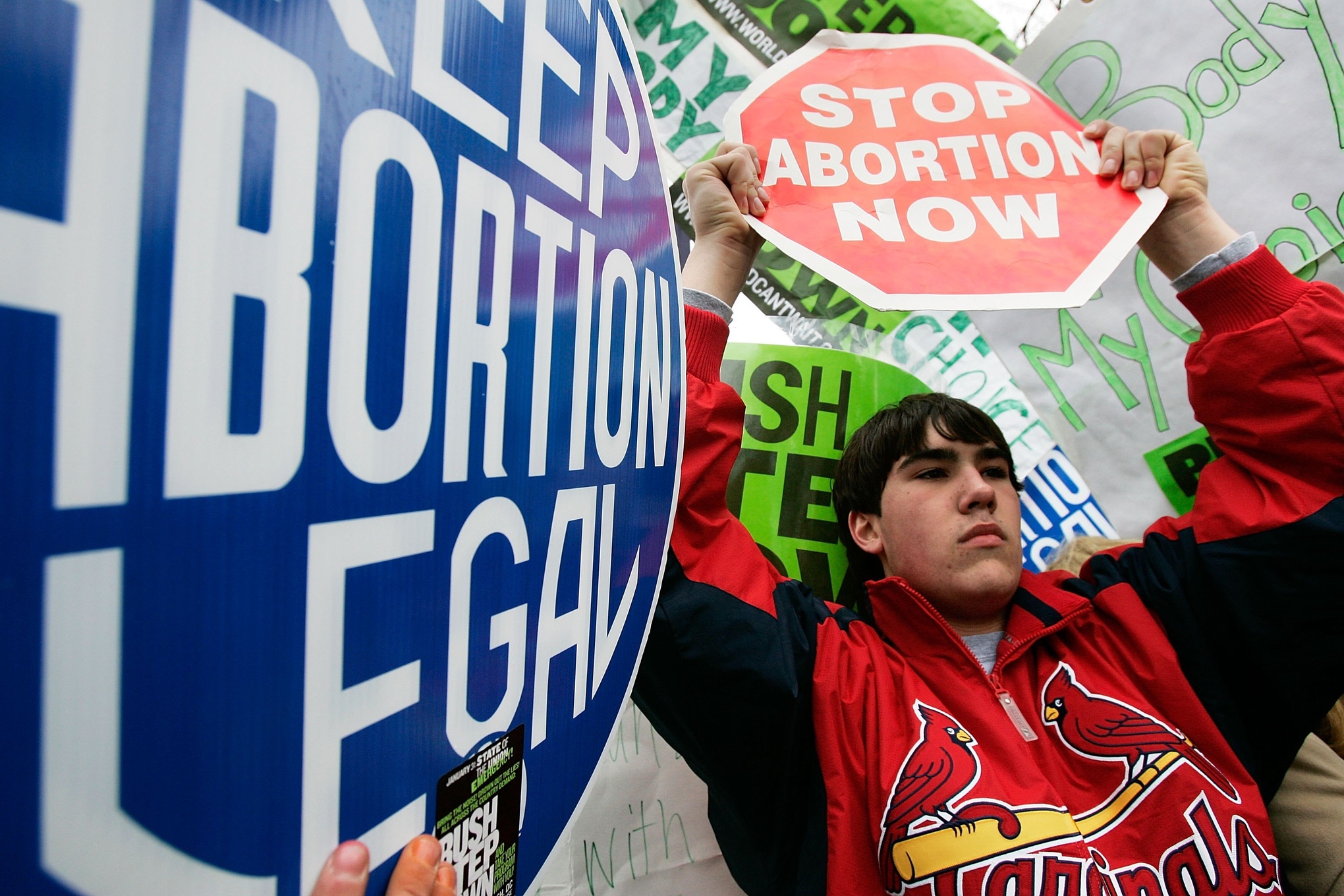 The Supreme Court has, in previous rulings, articulated standards for judging the constitutionality of abortion restrictions. It sets up at least two questions that lower courts need to grapple with in their decisions.

Does the regulation serve a compelling state interest? States pursuing abortion clinic restrictions have often argued that these regulations are meant to protect the health or life of patients. This is an argument Texas put forward in defending its admitting privilege law, citing Planned Parenthood's testimony that, on an average year, 210 women in Texas....must be hospitalized after seeking an abortion."

Does the regulation place on "undue burden" on a woman seeking an abortion? The Supreme Court has previously defined an undue burden as a law with the "purpose or effect of placing a substantial obstacle in the path of a woman seeking an abortion of a nonviable fetus." The Supreme Court has previously ruled that laws requiring women to notify their spouses of their abortion, for example,  are an undue burden as it could make it impossible for some women to access the procedure.

Both of these standards aren't especially well defined in previous abortion litigation, which partially explains why courts are coming to different conclusions on similar laws.

5) Judges have split on the legality of admitting privilege requirements

The Fifth Circuit Court of Appeals' jurisdiction covers both Mississippi and Texas. It heard arguments on both states' admitting privilege laws this year and, in a bit of a confusing move, separate panels of Fifth Circuit judges upheld the Texas law and then struck down Mississippi's.

In the Texas case, judges found that admitting privileges served a state interest of protecting women's health. Moreover, the judges there did not see the possibility of some clinics closing as an "undue burden" on Texas women. If some clinics do close, the reasoning went, patients could still drive further to seek services.

"There is no showing whatsoever that any woman will lack reasonable access," a federal court ruled

"Although some clinics may be required to shut their doors," the court wrote in its March decision, "There is no showing whatsoever that any woman will lack reasonable access to a clinic within Texas."

Three months later though, a separate panel of judges on the same circuit court ruled on the Mississippi law. And they found that law, which would have the effect of closing Mississippi's only abortion clinic, was an undue burden on women's access to abortion.

Mississippi's privilege law, a panel of Fifth Circuit Court judges found, "has the effect of placing a substantial obstacle in the path of a woman seeking an abortion in Mississippi, and is therefore unconstitutional as applied to the plaintiffs in this case."

Outside of the Fifth Circuit, a district court in Alabama struck down its admitting privilege law. That decision is likely to be appealed up to the Eleventh Circuit Court of Appeals. There is also a pending court case in Wisconsin; arguments wrapped up earlier this spring and a decision has not yet been issued. 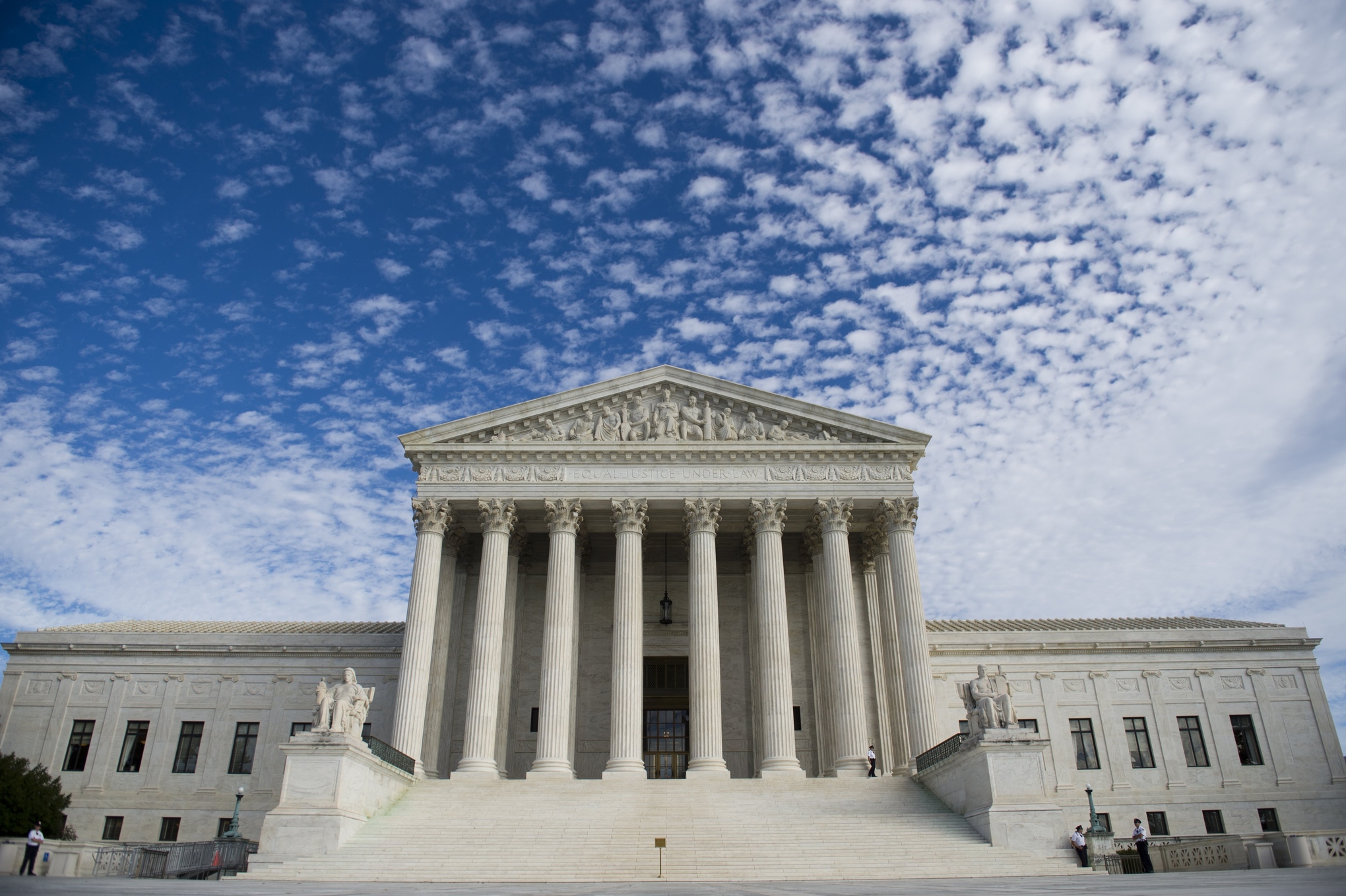 The four separate court cases and three decisions suggest a split in how lower court judges think about the admitting privilege laws' legality — one factor that is often considered in Supreme Court decisions to hear a case.

"I think the Supreme Court has to decide this," says Caitlin Borgmann, a law professor at the City University of New York who has written extensively on abortion law. "The lower courts are conflicted over at least three separate issues: how to evaluate undue burdens, what counts as a state's compelling interest and whether access to abortion outside state borders matters."

"the Supreme court has to decide this. The lower courts are conflicted."

And some observers already see signs of eagerness from the Supreme Court to take up the issue. When the justices refused to step in an enjoin the Texas law from taking effect last fall, Justice Stephen Breyer seemed to hint it wouldn't be the last time the court could grapple with the issue.

"The underlying legal question-whether the new Texas statute is constitutional-is a difficult question," he wrote.  "It is a question, I believe, that at least four Members of this Court will wish to consider irrespective of the Fifth Circuit's ultimate decision."