Paige Rawl was 12 years old when she told her best friend that she has HIV. She’s had the virus since birth — her mother unknowingly contracted it from her father, who eventually left the family.

Those reactions were devastating. Paige’s admission quickly spread through her Indianapolis middle school. Rawl’s schoolmates — even her friends — responded by mocking and ostracizing her. They refused to use the water fountain after her — afraid they’d get the disease, too. She was beat up and called names. Rawl went to the school counselor for help. Her advice to Rawl? Tell her friends that she didn’t have HIV after all.

"For me, that was bad," Rawl said. "This was someone I thought I could go to."

The last straw came when a soccer coach at the school asked Rawl about her condition in front of the entire team.

"My mom confronted my coach," Rawl said. "The coach made a joke to my mom that the team could use my HIV status to our advantage, because the players on the other team would be scared to touch me, and I could score goals."

Rawl withdrew from school and was homeschooled until college.

Rawl’s experiences aren’t unique — many of the 1.2 million people living with HIV in America face similar cruelty and misunderstanding from their communities. I wanted to learn more about their experiences, so in 2014, I contacted advocacy groups to connect with people living with the disease. I interviewed eight HIV-positive people, with a range of ages, sexual orientations, races, and backgrounds. These interviews, of course, don’t represent everyone living with HIV or AIDS. But they provide a glimpse into just how harmful the persistent misconceptions around the disease can be, even for some of the most optimistic people living with HIV.

There was a consistent theme in these interviews. After people were diagnosed, they quickly learned that proper medication can make the disease less deadly and more difficult to transmit. Indeed, HIV isn’t the death sentence it was in the 1980s and early 1990s. The age-adjusted death rate among people diagnosed with HIV and AIDS dropped by 93 percent between 1987 and 2010, according to the Centers for Disease Control and Prevention. A large part of that, the CDC explains, is attributable to the development of highly effective antiretroviral medication. 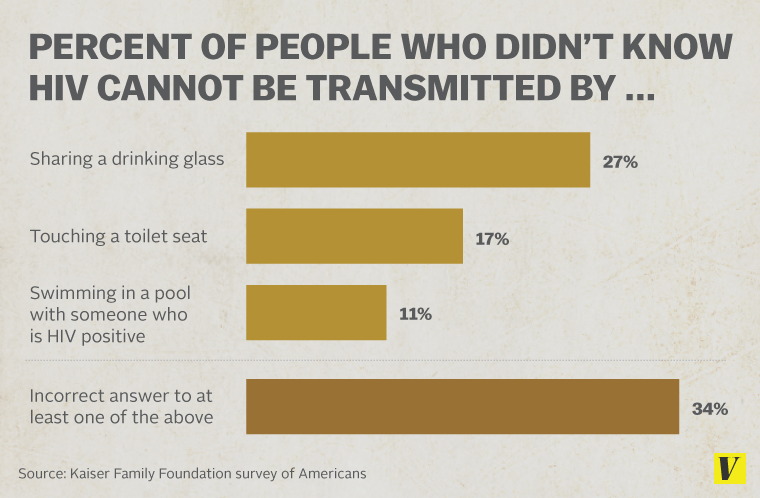 "When people see me, they’re often surprised when I tell them I have HIV," said Danny Harris, from Little Rock, Arkansas. "You can tell they’re taken aback, because we still live in a state here that thinks you can get it from kissing someone or sitting on a toilet seat."

These misunderstandings could affect public health

The stigma surrounding HIV makes life more challenging for people with the disease. The people I interviewed described being afraid to tell their families about their status, and concerns about how the disease affects their friendships and romantic relationships. The stigma also poses public health risks: Advocates and researchers are concerned that these misunderstandings could cause the disease to spread further.

"There’s issues around stigma and homophobia," said Amy Lansky, an HIV researcher at the CDC. "That might deter some young men from seeking HIV prevention services and testing."

A 2009 survey found that one in three people living with HIV still experiences high levels of discrimination due to the disease. Worse, those reporting the highest levels of stigma also report poor access to medical care. The stigma, in other words, correlates with less prevention and care for HIV.

The stigma also appears to make doctors wary of recommending HIV testing. In a 2011 survey, black doctors, who are more active in black communities in which HIV is more prevalent, said three of five barriers to offering routine testing for HIV are related to social stigma. Physicians said they're particularly concerned that patients may perceive a test recommendation as accusatory or judgmental.

"Living in Arkansas, being HIV positive communicates a lot of things. It communicates that he’s gay, he’s nasty, and he’s having random sex with all kinds of different people."

This problem can extend further, after someone is tested for HIV. Jimmy Walker, from Little Rock, said his doctor in Atlanta, where he lived at the time, offered little support after he was diagnosed.

"The doctor came that morning and said he had run a full gamut of tests to see if I contracted any kinds of diseases, and he told me all of those came back fine — but my HIV test came back positive," Walker said. "Then he walked out of the room and left me there."

Several of the people I interviewed also said that their doctors didn’t give them adequate information after they were diagnosed. They instead resorted to friends, peers, and the internet. For some of the subjects, talking about HIV is so stigmatized — even treated as a joke — that people can’t discuss where to get help.

Tommy Luckett, from Little Rock, said she wasn’t aware of the Ryan White HIV/AIDS Program, a federal program that helps low-income people obtain antiretroviral medication, until she chatted with a Tennessee-based friend online.

"I felt fear, like I was going to die," she said. "I didn’t know what I would be able to do, because I knew that I didn’t have the money to pay for any medication. I had already heard about how expensive the medicines were."

Luckett’s friend suggested that if HIV/AIDS support services exist in Tennessee, they surely exist in Arkansas as well. That led Luckett to the Ryan White Program in Arkansas, which helped pay for her treatments from then on. But without that one friend online, Luckett could have been left helpless — largely because the mere discussion of HIV can be so taboo.

Advocates and officials work to fight the stigma

The discrimination people with HIV face is compounded by a troubling reality: More and more young gay and bisexual men are contracting HIV.

A 2014 CDC study found that among all groups, annual HIV diagnoses between 2001 and 2011 increased the most among 13- to 24-year-old boys and men who have sex with men. Previous CDC studies also found a 22 percent increase in new annual HIV infections between 2008 and 2010 among the same group, and youth ages 13 to 24 accounted for more than one in four new HIV infections in the US in 2010. 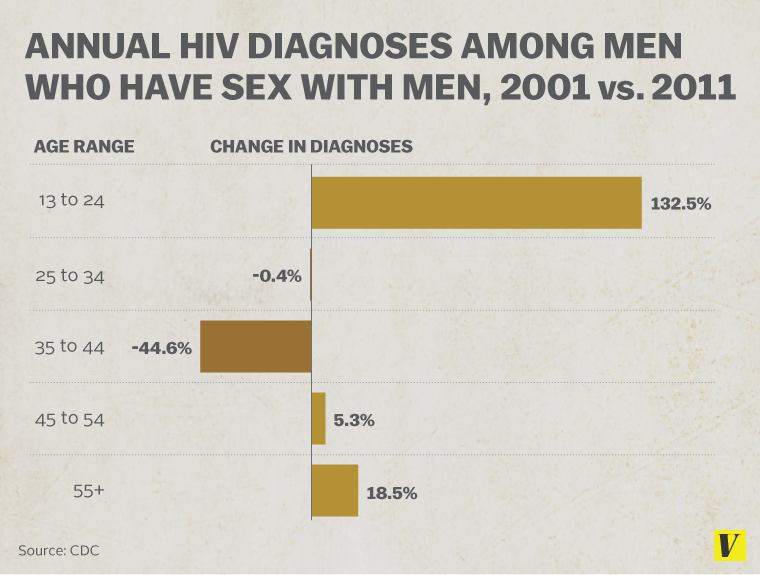 For advocates, part of tackling this alarming trend is dismantling the stigma attached to HIV.

Part of that is undoing anti-gay attitudes attached to the disease, which came about because HIV is more common among gay and bisexual communities. These attitudes can make it more difficult for gay and bisexual men with the disease to get proper care. A 2011 review of the research from the National Center of HIV found gay and bisexual men can delay getting treatment because they’re uncomfortable with their sexuality and are cautious of exposing themselves to any potential discrimination from health care providers.

Danny Harris confronted these attitudes in Little Rock. "Living in Arkansas, being HIV-positive communicates a lot of things," he said. "It communicates that he’s gay, he’s nasty, and he’s having random sex with all kinds of different people."

Another part of the stigma is that people only get HIV due to careless behavior and somehow deserve the disease. But Rawl has lived with HIV since birth. One of the men I interviewed was raped and contracted the disease. Many of the people I talked to were monogamous at the time they caught HIV, but their partners were either disloyal or didn’t know they were HIV-positive.

By breaking down these barriers, advocates and officials hope to open up discussion about HIV without the stigma attached to it. That could open more people to the idea that they might have the disease and should get tested for it, which can be a major hurdle — particularly for younger populations. A 2012 CDC survey of high school students found nearly 60 percent of young people with HIV are unaware of their infection, which obviously makes them much less likely to take proper medical precautions that would make the disease less transmittable and deadly.

Other times advocates take on the idea that the disease is still as fatal as it once was, which might scare people away from talking about the disease or thinking that they could have it. Harris travels across Arkansas to help people living with HIV. At first, he struggled about whether he should come out as HIV-positive. "After a while, I began to think it through and decided it was better that it be known," he said. "I could demonstrate with my own testimony and my own life that HIV doesn’t win unless you give it the victory."

To some degree, it seems this advocacy work has succeeded since the 1990s. The CDC’s Lansky points out that overall diagnoses and infections are down by one-third between 2001 and 2011, but most of those improvements were among injection drug users and heterosexual men and women. She said it’s now a matter of doubling down on efforts and building on progress made over the past few decades, particularly by targeting seriously at-risk groups like young, black, gay, and bisexual men.

For the CDC and advocacy groups, breaking the stigma and starting a more open conversation are the first steps. Then people can be guided to testing, told about drugs like Truvada that help prevent the spread of infections, get educated on the importance of other protection like condoms, and put on medication that reduces HIV viral loads and, as a result, reduces the disease’s deadliness and ability to spread.

Knowing first-hand how bad the misconceptions about HIV can get, Rawl has made it her life's calling to do the advocacy work, dissolve those stigmas, and start honest conversations about the disease. She travels the country to tell her story and what she’s overcome, and she hopes her memoir, Positive, which came out in August 2014, will help spread her story further. The education effort can get personal at times: Rawl sometimes has to convince parents of boyfriends that the disease isn’t as dangerous as it used to be.

"I think this generation, our parents, grew up when the disease came out and scared people," she said. "So they have a lot of that on the back of their minds, and they need more education on what it’s like now."

The animal that’s everywhere and nowhere