The Times of Israel published an article on "when genocide is permissible." Here's their funder

Share All sharing options for: The Times of Israel published an article on "when genocide is permissible." Here's their funder

A writer named Yochanan Gordan briefly had an article up on the website of The Times of Israel calling for genocide of the Palestinian population of the Gaza Strip. 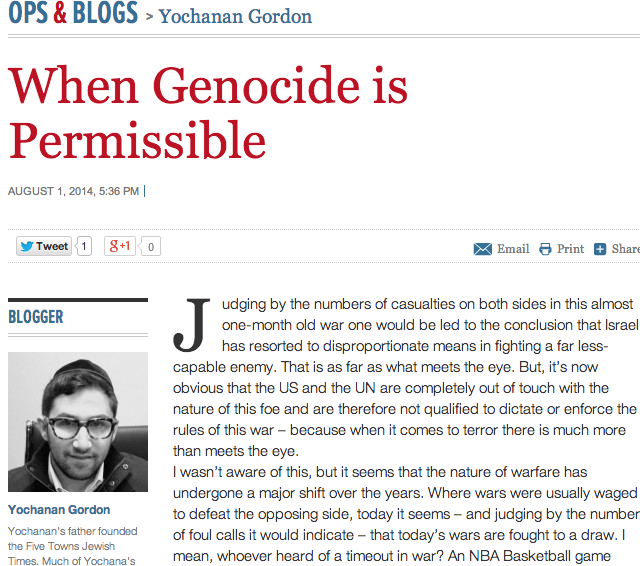 The site's editors seem to have come around to the view that this kind of content is wildly inappropriate and took it down.

The incident naturally raises curiosity about the nature of the Times, which turns out to be a fairly small audience English-language digital-only project. What's interesting, however, is that though it's formally organized as a for-profit, it's pretty clearly a money-losing endeavor undertaken by somewhat idiosyncratic Boston-area hedge funder and philanthropist Seth Klarman. Klarman is mostly a Republican, but he backs marriage equality for gay and lesbian couples. He's also one of the major sources of funding for the Ending Spending Action Fund.

More relevantly, according to Forward he's very active in a number of US-based pro-Israel groups of various stripes:

But the foundation also has a focus on Israel advocacy. Klarman has been a board member of, and a major donor to, The Israel Project, a fast-growing pro-Israel advocacy group that seeks to provide information useful to working journalists. He gave the group nearly $4 million between 2008 and 2010.

The foundation has also given smaller amounts to the Middle East Media Research Group, an anti-Islamist research group whose board members include Elliott Abrams, a senior aide in several Republican administrations, and Steve Emerson, a researcher devoted to exposing ties, as he perceives them, between American Muslims and extremist Muslim movements. Klarman has also contributed to the Committee for Accuracy in Middle East Reporting, a group devoted to combating what it sees as anti-Israel bias in the media.

Klarman has also been the longtime chairman of The David Project, a Boston-based group mostly concerned with pro-Israel advocacy on campus. The group is also known for its long-running, and ultimately failed, effort to oppose the construction of a Boston mosque. Klarman said in an interview with the Forward that his interest in The David Project was in its campus work. The group has recently adopted a more moderate approach to campus activism.

Obviously the folks running the show at the Times of Israel have the good sense to recognize after the fact that open calls for genocide are not in keeping with an institutional mission to try to make Israel look good in the world.