Share All sharing options for: "A violent virus": views from Ebola's ground zero

Aid worker Ishmeal Alfred Charles says getting abducted as a child soldier during Sierra Leone's bloody civil war when he was 15-years-old was less scary than living there now under the Ebola threat.

"You knew the rebels were coming," said the Freetown native in a recent interview from Sierra Leone, where he is among hundreds of aid workers trying to beat back the deadly virus in what is now the biggest-ever outbreak and the first to hit West Africa. "They'd attack a town, and so you made a move. You knew to hide."

Now, he can't flee. It's too expensive to fly elsewhere. And he can't hide from an enemy that could be lurking anywhere. Instead, he has stopped shaking people's hands and he installed a hand-washing station—a bucket filled with chlorinated water—outside his house. 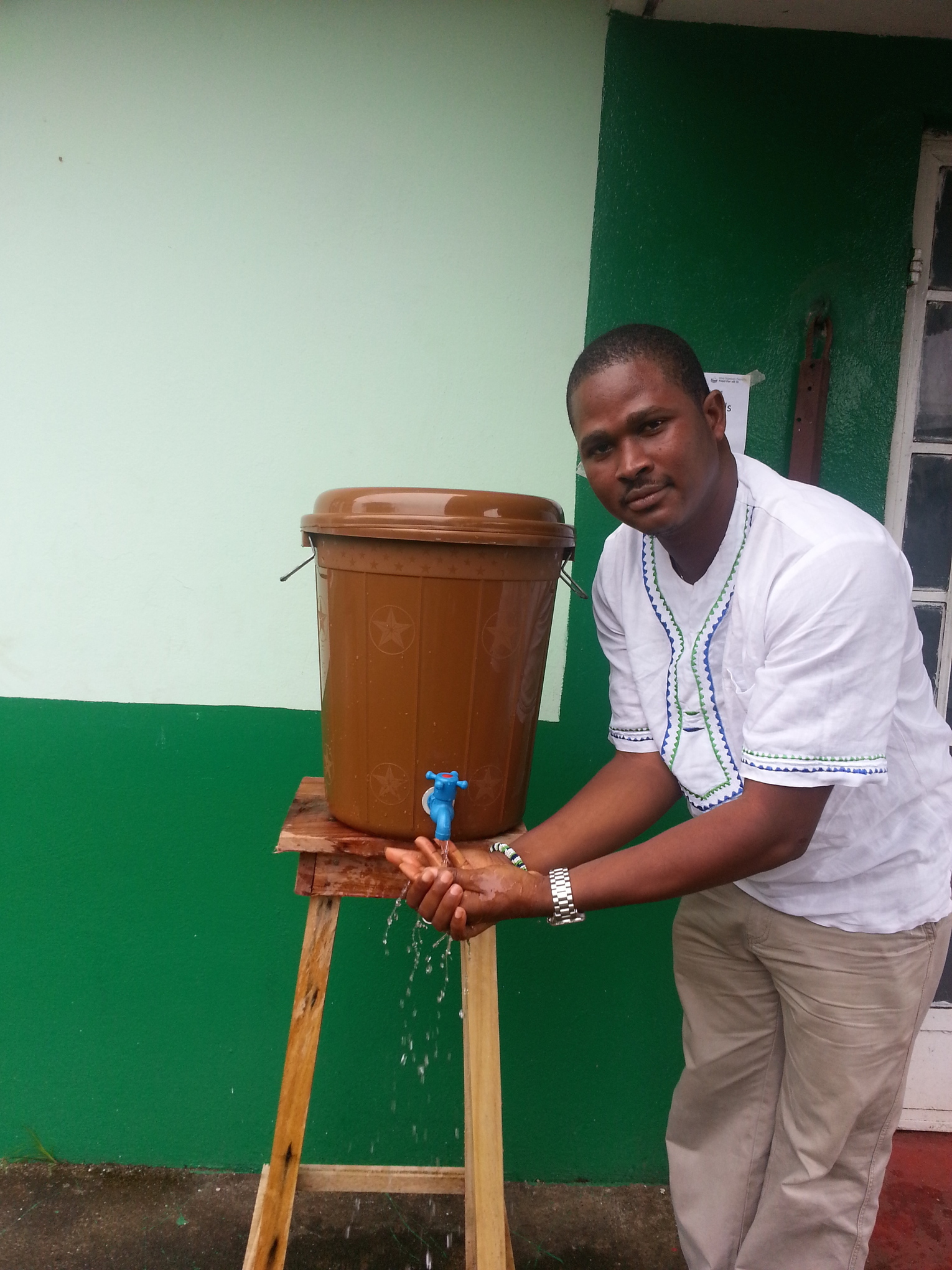 "You don't know if the person you're sitting next to is infected with Ebola, so all you're trying to do is be as conscious as you can. Because we have heard of situations where whole families get infected... and you lose everyone in the family."

For most people, Ebola is a distant threat, a nightmarish word that conjures up images of sudden and violent hemorrhaging. But for West Africans like Charles, it's now an everyday possibility. "Wherever you go—on Facebook, in the community, on the phone, in Whatsapp messages—people are talking about Ebola."

As a program manager with the Catholic aid agency Caritas, Charles now works to educate people about a virus that only recently emerged in Sierra Leone. He goes door to door, school to school, church to church; he talks to everyone he can reach about the disease; and he hands out hand sanitizer and chlorine. Sometimes, he uses megaphones in town squares, relaying public-health messages about sanitation and prevention. It's a tedious process, he says, but it's necessary.

"A lot of people still have denial about Ebola. That's one of the biggest challenges."

"A lot of people still have denial about Ebola," Charles says. "That's one of the biggest challenges."

Stories about medical personnel and the government trying to kill or capture Africans circulate, and it doesn't help that when patients are taken into quarantine, they most often never return.

Dispelling these myths isn't easy. "We show them films, photos of Ebola," says Charles. "We try to make sure they understand, first and foremost, there's a virus called Ebola and it's real."

So far in the current outbreak, there have been 1,323 confirmed and suspected cases of Ebola, and 729 deaths. No one knows why the virus sometimes jumps from the fruit bat—which most scientists believe is its animal host—into the human population. But bad infrastructure and the lack of sanitation practices in what are some of the poorest countries on earth don't help with its containment.

"It's a violent virus. You never know what's going to happen."

The shortage of resources has made the work very difficult, says Monia Sayah, a nurse with Doctors Without Borders.

Sayah, who normally resides in Brooklyn, New York, has just finished two stints on the front line in Guinea, the West African nation where the disease first reemerged in March.

When she arrived, she said her biggest challenge was not trying to get people to believe the disease is real: it was figuring out how to care for the reality of so many sick patients. 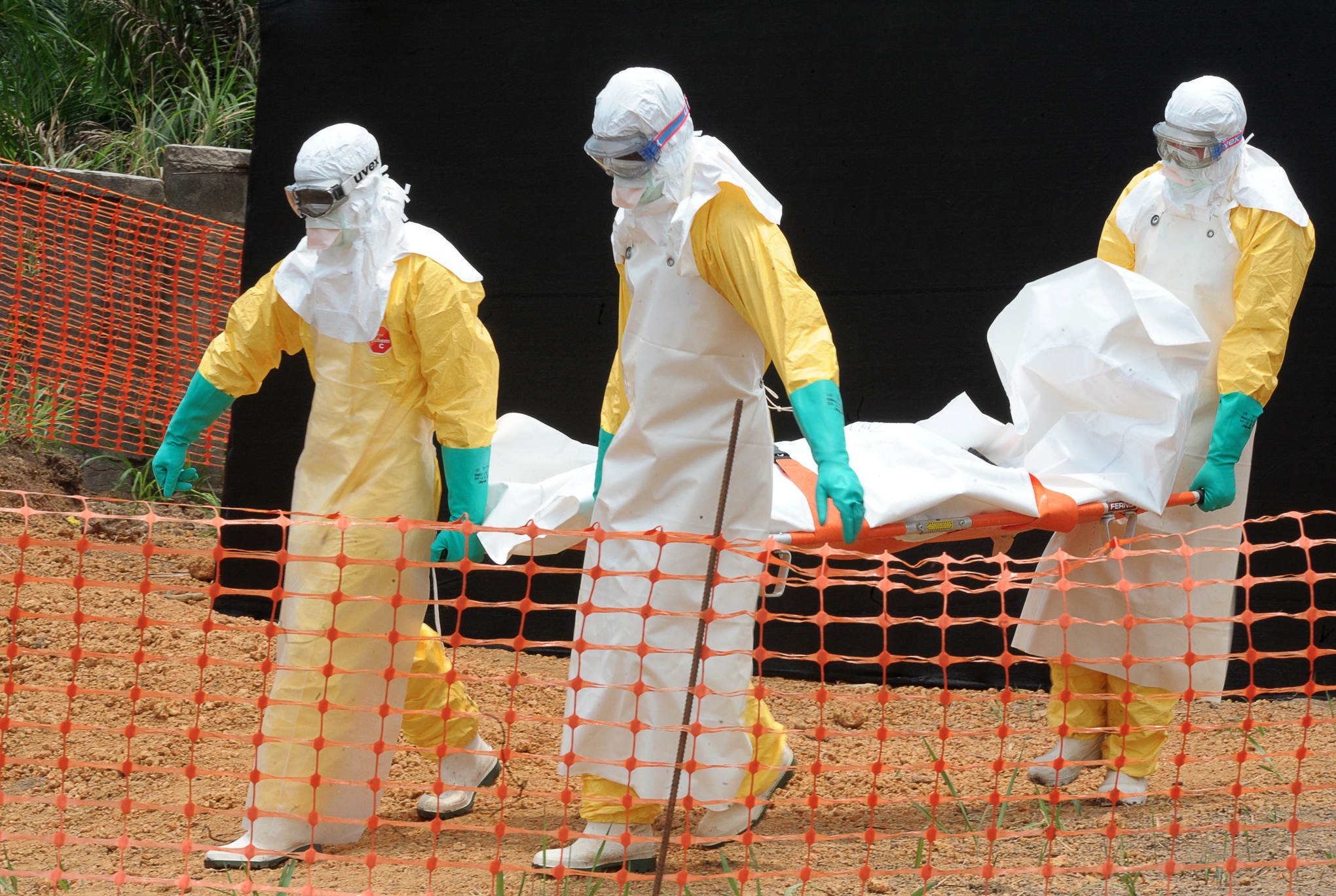 Staff at Doctors Without Borders carry the body of an Ebola victim. Staff/Getty Images

"The workload was very high," she says of dealing with up to a dozen Ebola patients in quarantine. So was the mortality rate: at the beginning, about eight in ten patients were dying, close to the numbers in previous outbreaks of the Zaire Ebola virus, which killed 79 percent of those infected. (The death rate in the current outbreak has dropped to around 60 percent.)

"It's very stressful because you're constantly on alert: a patient here, a patient there. The physical stress of working is very hard because you lose a lot of fluid (wearing protective clothing), and get very tired in the heat as well." All the while, trying to make sure she didn't expose herself to the virus or accidentally cross-contaminate any person or thing.

When doctors work with ebola patients, "every inch of the body is covered"

When she'd arrive at the treatment facility in the morning, she'd put on a gown and then a waterproof and airtight suit, headgear, goggles, two pairs of gloves, and rubber boots. "Every inch of the body is covered," she says. When she left 12 hours later, everything except for her rubber boots—which get decontaminated with choline solution—was burned.

Since there is no treatment or cure for Ebola, caring for patients meant hydrating them, feeding and washing them, helping them walk, and giving them antibiotics to ward off any bacterial infection so that their immune systems can fight the virus.

It also meant touching and comforting them. "They're alone. They are isolated. Normally in this part of Africa people are never alone when they're sick." Most commonly, family members care for their loved ones at home—not strangers in a containment facility.

"We take them away from their families," says Sayah. "We know we're bringing them to a treatment facility, the place they should be to receive the best care, to isolate the virus. But the virus is inside a person."

The other tricky thing about Ebola is how quickly it can overtake its host. "We have patients asking for lunch, and we would go to see them a few hours later, and suddenly they would just die. It's a violent virus. You never know what's going to happen."

Since working in the field, she has seen people lose their entire families. She has watched teenagers perish before her eyes. In another case, she says, "I went to see a woman in the community, and she was lying in a pool of blood. I thought she had a miscarriage there was so much blood." The medical team was able to get her to a treatment facility, and stop the bleeding, but she was already very weak and died shortly thereafter.

What's so critical about Ebola, too, is making a differential diagnosis between what might be the lethal virus and any other number of diseases that have a similar profile at first.

"Trying to make a differential diagnosis is difficult because you're in a village," Sayah explained, "you have nothing with you. All you have is a thermometer."  If you misdiagnose a negative patient, that can mean unnecessary isolation and trauma. If a positive patient is passed, that's another potential site of infection—and more spread.

Ebola specialists believe one of the key reasons this outbreak has spread so far is because of the shortage of health-care personnel to deal with it: if you don't have enough people on the ground doing the labor-intensive job of tracing the contacts of positive patients and ensuring they are identified before becoming ill too, each missed case is the new beginning of more human-to-human spread.

Those missed cases are what worries Tarik Jasarevic, a World Health Organization worker on the ground in Guinea. He says that because of the geographic dispersal of the current outbreak—the demand for so many specialists in a relatively rare disease over several countries—mobilizing people and getting systems in place to care for everyone is problematic.

According to Jasarevic, you need these basic resources to contain an Ebola outbreak: "You need to have enough treatment centers so infected persons can be treated in adequate conditions. You need to have surveillance systems. You need to have a system where suspect cases and deaths are being reported so we can go in very safely and check on suspect sick people. We need to have lab capacity to make sure the people infected are identified."

The WHO and other aid organizations have been short on many of these fronts right now, and the UN just pledged $100-million to help quell the current outbreak.

For now, Jasarevic says he's doing what he can in a very uncertain environment. "You try to wash your hands as much as you can. You try to make sure you don't touch people who are sick. But you just don't know who may be in contact with the virus."