US politics really is getting more toxic

Share All sharing options for: US politics really is getting more toxic

Congress is heading out of town for a five-week recess after a session in which it fixed neither the structural insolvency of the highway trust fund, nor addressed the looming expiration of the Export-Import Bank, nor the logjam of child migrants at the border. All thought of larger  comprehensive immigration reform is but a faint memory now. They did manage to reach an agreement on reforms to the VA but only thanks to the convenient bipartisan fiction that spending doesn't need to be paid for if it's for the sake of the troops. And the culprit is familiar — polarization — the parties are simply too far apart to reach meaningful agreement on anything and it leaves the country bouncing from crisis to crisis with longer-term issues unaddressed.

Yet recently, political scientist Jonathan Bernstein said it's time to stop talking about polarization. After all, he says, polarization is "not some sort of freakish un-American phenomenon." The real anomaly was the un-polarized mid-twentieth century. Today's levels of polarization, while high, largely just return us to where we were 100 years ago and more. And somehow those pre-World War One politicians found a way to make it work. 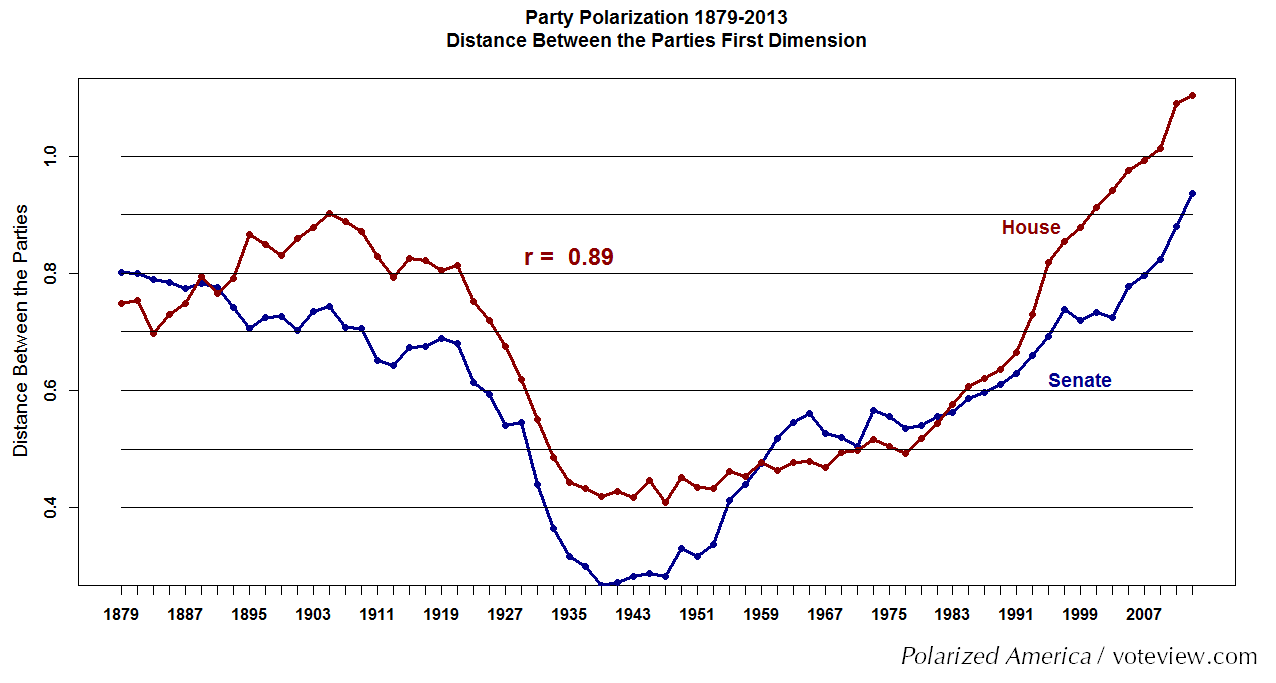 It's true that congressional politics have been sharply polarized before. But Hans Noel's important book Political Ideologies and Political Parties in America has convinced me that Gilded Age polarization tells us less about the present day experience of polarization than one might think. What Noel does is research political ideology as distinct from mere partisanship. The methodological details are interesting, but broadly speaking he looks at the views expressed by writers and other pundits — people who engage with public affairs but aren't subject to electoral or other forms of discipline.

What he finds is that in the Gilded Age parties were polarized but the ideologues were not. Writers had strong views on issues, but there was no coherent alignment between them. Over time, liberal and conservative ideologies began to form.

The writers who favored high taxes were also more dovish in foreign affairs and more friendly to the civil rights movement, while conservatives stood for traditional sexual values and racial hierarchies and for hawkish foreign policy and for free markets. For decades, the effect of this rising tide of ideology was to reduce partisan polarization in congress. Many members found themselves cross-pressured between identities as conservatives and identities as Democrats. Other were cross-pressured between liberal or moderate identities and Republican identities. Then over the past few decades, the parties re-polarized again along ideological lines.

The not-so-encouraging aspect of this is that the result of America's previous experiment with fusing ideological and partisan politics was a civil war in which hundreds of thousands of people died,

In most respects, one would have to judge the motives of modern activities to be more high-toned and admirable than those of a 19th Century ward heeler. But polarization and non-majoritarian institutions intersect in a different way when you're talking about ideological politics than when you're talking about transactional politics. Precisely because today's parties are dominated by high-minded individuals and groups with high-minded concerns, they are reluctant to cut deals. A dispute about patronage lends itself to a pragmatic agreement in a way that a dispute about principle simply does not.

That said, it's not entirely unprecedented for America's Madisonian political institutions to be occupied by ideological political parties.

Another thread of Noel's research shows that the "free labor" ideology of the early Republican Party (see Eric Foner's masterful book Free Soil, Free Men, Free Labor for what that ideology looked like) emerged among the pundit class before any such party coalition existed in congress. The Republicans who swept into Northern offices in the 1858 midterms and into control of the White House in 1860 were a coalition of like-minded ideologues, not just a random network of operators.

The not-so-encouraging aspect of this is that the result of America's previous experiment with fusing ideological and partisan politics was a civil war in which hundreds of thousands of people died, not exactly an encouraging precedent for the ability of American institutions to handle conflict between ideological parties. The good news is that looking back on it, it seems clear that the Republican leaders were right to be inflexible in their insistence that slavery be excluded from new territories and put on a path to extinction. But of course the ideological activists on the other side of that issue were dead wrong, and ultimately brought nothing but ruin and suffering to the country.

No doubt today's ideologues all think they're Abraham Lincoln. Common sense says otherwise. But either way, it's genuinely not a situation our institutions have much experience with.