In recent years, policymakers have raised alarm bells that digitizing health records would lead to rampant fraud and abuse.

A 2009 law created incentives for hospitals to move from paper to electronic health records. The digital systems, critics warned, could make it easier for doctors and hospitals to "upcode", billing insurers for more intensive — and more expensive — care than was actually provided.

"Despite conventional wisdom that the wide adoption of health IT would decrease unnecessary tests and imaging as physicians had better electronic access to records, other early evidence actually suggests the opposite," wrote six Republican senators in a 2013 report. "Health IT may have increased the likelihood that duplicative, unnecessary care, such as redundant testing or procedures, will be done."

Turns out, those fears may be overblown: a new study published in Health Affairs, the adoption of EHRs was not associated with patients being billed as "sicker", or with higher payments to Medicare.

The chart below illustrates trends in "case-mix" (how sick a hospitals patients were reported to be) and Medicare payment per patient released from the hospital. If doctors were upcoding, you'd expect to see a sicker group of patients  among the hospitals implementing electronic records after they adopted EHRs.

Though the case-mix index and payment increased for all hospitals over time, the increases didn't vary much based on whether or not the hospitals adopted electronic records. 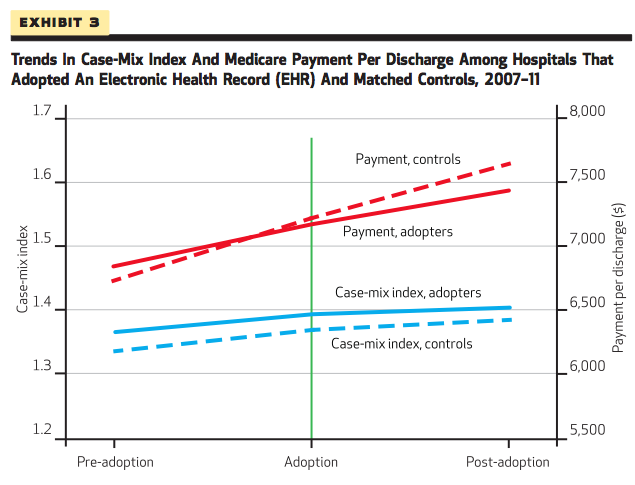 Medicare payment actually went up more for the controls — hospitals that did not adopt EHR — than for hospitals that digitized their records. However, this difference (about $96 per patient discharged) was not statistically significant.

So far, concerns about up-coding have been largely driven by anecdotal reports, the authors say. The New York times also used Medicare data in 2012 to report that EHR adoption was associated with higher payment. However, their analysis did not rigorously control for differences across hospitals that could matter, like size and whether a hospital is an academic medical center.

The HHS Office of Inspector General recently recommended that the government undertake a large-scale policy effort to target at reduce fraudulent billing. This research suggests that the time and money required would be better spent elsewhere.

"A policy intervention to reduce fraud is therefore not likely to be a good use of resources," the authors write. "Instead, policy makers should focus on ensuring that hospitals use EHRs in ways that are likely to reduce health care spending and improve the quality of care."