Share All sharing options for: The amazing, mysterious decline in Medicare's price tag

This simple, four-line chart is amazing news for the federal budget. It shows that the government is expected to spend about $50 billion less paying for the Medicare program this year than it had expected to just four years ago. 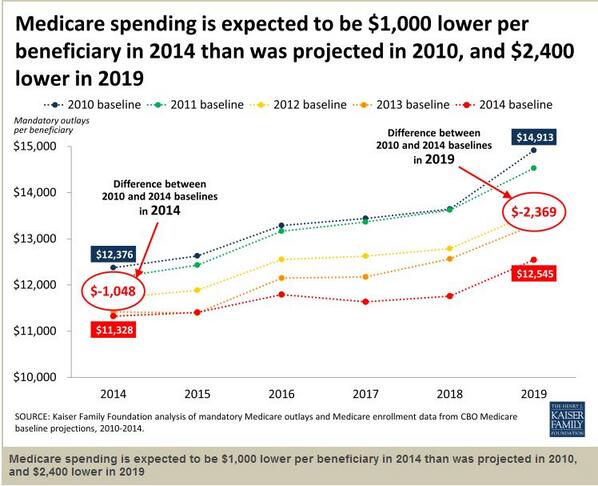 What this chart shows is how much the Congressional Budget Office expects we'll need to pay for each and every Medicare beneficiary. And over the past four years, the forecasting agency has consistently downgraded the price of covering one senior's health care costs.

Saving $1,000 per patient adds up quickly in a program that covers about 50 million people. More precisely, it adds up to about $50 billion in savings this year. The reduction in expected costs grows to $2,369 in 2019. With an expected 60 million seniors enrolled in Medicare that year, it would work out to more than $120 billion shaved off the total cost of the program.

"The numbers are impressive, and the consecutive year-to-year reductions in projected Medicare spending are unprecedented," Kaiser Family Foundation's Tricia Neuman and Juliette Cubanski, who drew up the above chart, write. "The unexpected $1,000 per beneficiary reduction in spending this year may ease short-term budgetary pressures on Medicare and could provide an opportunity for thoughtful consideration of ways to bolster the program for an aging population."

As to what is driving the lower than expected spending, that's not completely clear. But Neuman and Cubanski have a few guesses.

Unnecessary readmissions — when someone turns up at the hospital a second time because something went wrong on the first visit — are bad for patients and for budgets.

The good news on unnecessary readmissions is they're becoming less frequent among Medicare patients, a drop that started at just about the same time as CBO began revising downward the cost of covering a Medicare patient.

When there are fewer trips to the hospital, insurance coverage becomes, unsurprisingly, less expensive — and that could be part of the explanation for the downward changes.

The health care law included lots of changes to the way that doctors get paid within the Medicare program, all aimed at getting doctors to provide better care at lower costs. That's true, for example, with readmissions: Obamacare now penalizes hospitals when their patient shows up for a second visit that didn't need to happen, if everything had gone right the first time.

There are dozens of changes like this that could be playing a role in explaining why Medicare may cost significantly less than initially expected. This theory, as Neuman and Cubanksi acknowledge, is still somewhat speculative. Some of these programs didn't start until 2012, which makes it difficult to attribute the revised estimates in 2010 and 2011 to health reform.

The Budget Control Act of 2011 included a 2 percent cut to Medicare doctor payments. This was significantly less than the across-the-board spending reductions of 8.6 percent that other federal agencies saw, but it might have played a role in the downward revision between 2010 and 2011.

Again though, its not a full explanation: CBO knew about the sequester in every forecast after 2011. So the agency thinks something else is going on that would drive down Medicare costs even further than the BCA can explain.

Without any clear explanation of why expected Medicare cost growth has slowed so much, Neuman and Cubanksi dub it a bit of a "mystery" — one that has incredibly good implications for the budget.

"Whatever the causes may be, the slowdown in spending is good news for Medicare, the federal budget and for beneficiaries-at least for now, and as long as it does not adversely affect access to or quality of care," they write. "Lower costs lead directly to lower Medicare premiums and cost sharing."