Share All sharing options for: Here's what it would really take to avoid 2°C of global warming

In a new report on "deep decarbonization" for the United Nations, a team of experts tried to model the massive shifts that would be required if we wanted to cut emissions drastically by mid-century and avoid more than 2°C of global warming.

Meeting that goal, the report notes, would require the 15 largest economies to cut their carbon-dioxide emissions in half over the next four decades (at the moment, emissions are growing each year and show no signs of dropping). The average person worldwide could emit no more than 1.6 tons of carbon per year by 2050 — less than one-tenth of what the average American currently emits.

That's an incredibly difficult task, and there's no guarantee that countries will actually do any of that. Still, the report offers one of the most detailed looks yet at what each country would have to do to decarbonize its economy without sacrificing economic growth.

How the US, China, Japan, and Russia would cut emissions

There are all sorts of ways to divvy up emissions cuts among the largest emitters, but one illustrative example is below. Wealthier countries like the United States and the EU nations would make huge reductions starting now. China's emissions would peak by 2030. India's emissions, meanwhile, would gradually rise between now and 2040 or so (the idea is that this is only fair since India is still so poor). 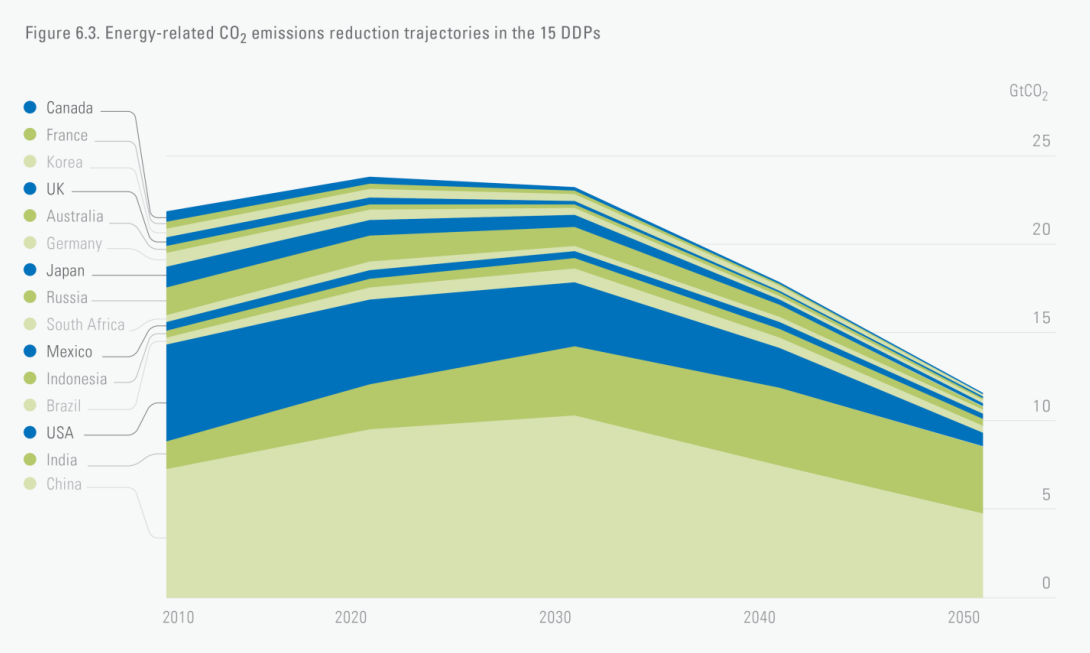 So how would emissions fall, exactly? The researchers first assumed that each country took immediate action to reduce emissions and then modeled various scenarios for what their energy systems might look like in 2050. (They also tried to keep costs as low as possible while maintaining grid reliability.) A few examples:

The United States eventually gets 30 percent of its electricity from nuclear power and 40 percent of its electricity from renewable sources like hydro, wind, and solar by 2050. Electric vehicles would handle about 75 percent of all trips. Large trucks would get switched over to natural gas. The coal plants that remained would all capture their carbon-dioxide emissions and bury them underground. Every single building would adopt LEDs for lighting.

China continues growing, but it slowly shifts away from heavy industry — cement and steel production both peak by 2020. The country phases out conventional coal by 2050 and relies much more heavily on nuclear, hydro, and wind. Vehicle travel increases tenfold by mid-century, but fuel economy improves 30 percent. Electric trains account for roughly half of all trips in China.

Japan has a relatively easier time cutting emissions as its population steadily declines between now and mid-century. Nuclear power plants are slowly phased out but natural gas becomes the dominant energy source — and all emissions are captured and buried underground.

Russia continues to grow but manages to cut its emissions by electrifying its economy and by scaling up its nuclear and hydropower plants. Natural gas steadily displaces coal. The country also relies more heavily on biomass to provide half its heating by mid-century. Driving in Russia doubles by mid-century, but most cars run on natural gas, reducing vehicle emissions. (Electric cars are slower to catch on due to the cold weather.)

The task gets harder if certain technologies are ruled out

The graph below offers one scenario of what the electricity systems in these 15 countries might look like by 2050 with steep emissions cuts:

Important note: this is only one possible scenario. The precise energy mix in 2050 would depend on what technologies were actually available.

The hardest country to decarbonize is, of course, china

In the scenario above, for instance, the researchers assume that technology to capture coal emissions and bury them underground (known as "CCS") would become commercially viable by 2025. They also assumed long-range electric vehicles would be widely available by 2025. And that hydrogen fuel cells would be available by 2035. And that nuclear power is allowed to expand in many countries.

But if any of those technologies are slow coming to market, then countries would need to find other ways to cut emissions. For instance, if carbon capture is slow to develop, the researchers found, then the United States might have to rely on nuclear power for up to 60 percent of its electricity needs by 2050 to make those cuts. And if, on top of that, there's resistance to nuclear power — say, due to local opposition or safety concerns — then renewables would have to supply 75 percent of US electricity needs, an even tougher task.

On the flip side, the teams from Germany and Japan both assumed that their countries would phase out their nuclear programs by mid-century, as is currently planned. But if, say, Japan decided to keep its nuclear plants open instead, the country would have an easier time cutting emissions elsewhere.

The hardest country to decarbonize was China. So much heavy industry — particularly steel and cement — has migrated to the country in recent decades, and those sectors are the hardest to clean up. One possibility is that some of these heavy industries will migrate to even poorer countries as China decarbonizes. Trouble is, that wouldn't do much for global emissions. Another possibility is that wealthier regions like the United States and Europe might assume some responsibility for China's industrial emissions (after all, China is producing a lot of goods for Americans and Europeans) and take on even deeper cuts themselves.

Overall, the report notes that cutting emissions this sharply will be an incredibly daunting task — requiring both a drastic shift in policy and heavy R&D into advancing energy technologies. "The nature and magnitude of the decarbonization challenge are such that there is no quick and easy fix," the authors conclude. What's more, the report notes that we'll likely need technologies after 2050 to pull carbon out of the atmosphere, like some sort of air capture.

But what this report does show is that steep emissions cuts — and staying below the 2°C global warming target — are at least in the realm of technical possibility. Whether the world's largest countries actually decide to pursue this course is another matter entirely.