Share All sharing options for: It's not just hipsters on bikes — cycling is most popular for poor people

Courtland Milloy, a local columnist for the Washington Post, has a rather cranky column expressing some road rage against bicycle commuters and the politicians who cater to them. His most inflammatory sentiment is that automobile commuters ought to consider murdering bicycle commuters ("It's a $500 fine for a motorist to hit a bicyclist in the District, but some behaviors are so egregious that some drivers might think it's worth paying the fine") but it's also clear that Milloy is in a lot of ways more concerned with gentrification than with transportation policy.

He references discussion about how to improve the bicycle route around "what used to be known as Malcolm X Park (until influential newcomers to the city pressed to get it changed back to Meridian Hill)." In fact, as Aaron Wiener writes, the park has always been legally known as Meridian Hill Park and informally known as Malcolm X Park in the neighborhood (unlike Miloy who lives in the suburbs, I've lived in the neighborhood for years).

And this points to one of the biggest myths about bicycle commuting and alternative transportation in general — in reality these are predominantly commuting modes of the less-privileged. The Census Bureau has the numbers to prove it. 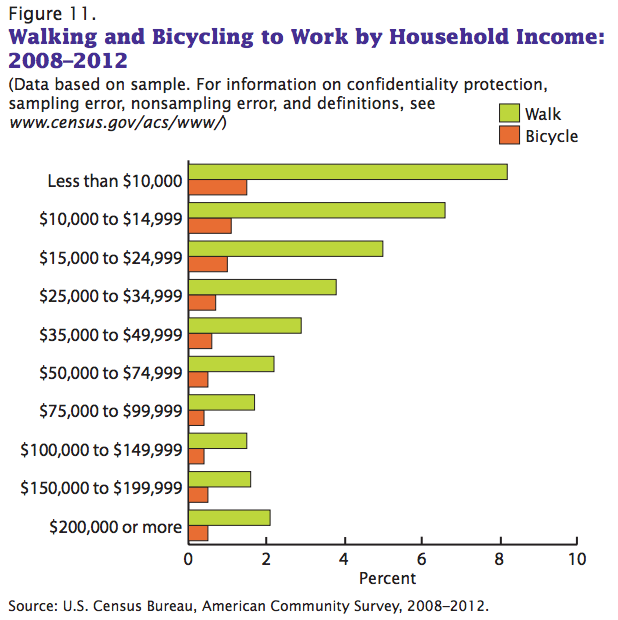 As you can see, cycling is much more popular among households with incomes below $25,000 a year than it is among affluent people. It is interesting that there is a small uptick in both cycling and walking once you get into the over $200,000 range but you see that both forms of non-motorized transportation are much more popular with the poor than with the rich or the middle class. And when you think about it, this makes perfect sense — cars are more expensive than bikes, car parking is more expensive than bike parking, and gasoline is more expensive than pedaling.

Biking is most popular with Latinos 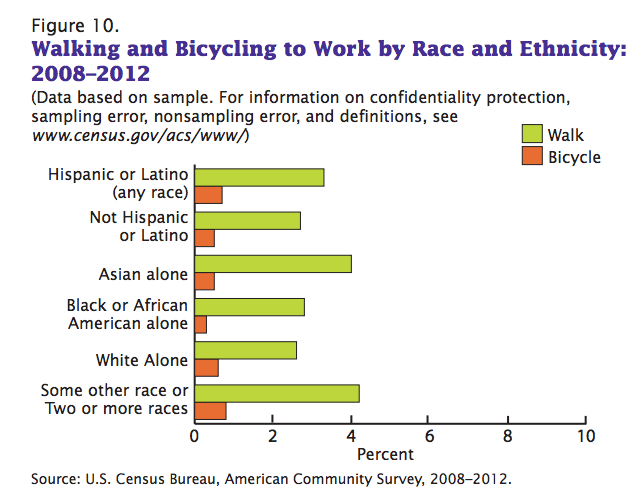 The ethnic group most likely to bicycle to work in America is Latinos, not non-Hispanic whites. And white people are the least likely to walk to work. This, too, should be no surprise. The white population in the United States is less urbanized than other ethnic groups, so white Americans are less likely to use city-friendly modes of transportation.

What is true is that when it comes to bicycle facilities, just like many other municipal services, there is a tendency to shortchange low-income neighborhoods with inferior infrastructure. That's deplorable. But systematically downgrading a whole metro area's bicycle facilities — or murdering cyclists at random — in favor of a more car-friendly transportation system is going to disadvantage a disproportionately disadvantaged population in favor of the more affluent class of car owners.