Why you should never, ever touch that hospital elevator button

Share All sharing options for: Why you should never, ever touch that hospital elevator button

It's no secret that hospitals are dirty places. Hospital-acquired infections, like C. difficile, are major killers, and everyday objects on the wards—from white coats to ultrasound equipment—are well-known harborers of bacteria.

Now, a new study in the journal Open Medicine has revealed a little-known germ hotspot: the hospital elevator button.

The research, conducted by three physicians, compared the amounts of bacteria living on 120 elevator buttons and 96 toilet surfaces at three hospitals in Toronto, Ontario.

To find out just how the dirty hospital surfaces were, the researchers acted like Holmesian microbe hunters, swabbing elevator buttons, and the handles of bathrooms stalls and toilet flushers.

A lab technician—blinded to the source of the samples and purpose of the study—then examined them. 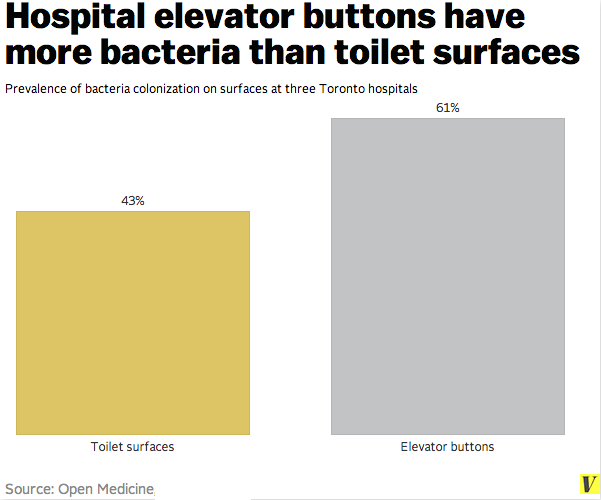 Now, the study has a few limitations. The samples were taken during flu season, which may have prompted people to use more hand sanitizer. It was also cold outside, when many folks wear gloves. This means the hospital surfaces may be even dirtier than the researchers found. On the other hand, since influenza was in full swing, there may have been more hospital traffic than usual, which would also bias the research.

That doesn't mean they're not possible vectors of disease, however. "Patients remain at potential risk of cross-contamination because of the frequent use of these buttons by diverse individuals," the study authors wrote. "In addition, a visitor is more likely to come into contact with an elevator button or a toilet than with inanimate hospital equipment and may transmit organisms if interacting with inpatients."

So the researchers offered a few solutions: place alcohol-based hand sanitizers outside elevators, enlarge elevator buttons so that people can use their elbows to push them, or make the elevator experience touchless.

Interestingly, while they found elevator buttons were dirtier than toilets, they were actually cleaner than hospital computer-keyboards and ultrasound transducers. Maybe this means everything in a hospital should be touchless, or at least as clean as the bathrooms.