Why "old book smell" has hints of vanilla

Share All sharing options for: Why "old book smell" has hints of vanilla

Stick your nose deep into an old book and inhale deeply. It contains, librarians say, "hints of grass and vanilla," among other smells.

The distinctive "old book smell" is so beloved among some readers that there's a parody company out there pretending to sell an artificial spray that makes e-readers smell like books.

hundreds of different chemicals are emitted by paper, binding, glue, and ink as they break down over time

What accounts for it? As it turns out, dozens of different chemicals that are emitted by paper, binding, ink, and glue as they break down over time.

Chemists have conducted a few different studies identifying them. One prominent compound results from the breakdown of lignin, a polymer found in plant cell walls, as well as paper. As it degrades, it's converted into vanillin, a chemical naturally present in vanilla beans, accounting for the hints of vanilla.

But many other compounds are also involved: one study found that 15 different volatile organic compounds reliably turned up when 72 old books were analyzed, suggesting they're the ones commonly responsible for the "old book smell."

The point of all this research is to understand the book degradation process well enough so that someday, librarians can determine a book's age simply by analyzing the compounds it's emitting. Recently, British chemistry teacher and blogger Andy Brunning of Compound Interest put together a nice infographic highlighting some of the main findings in the area: 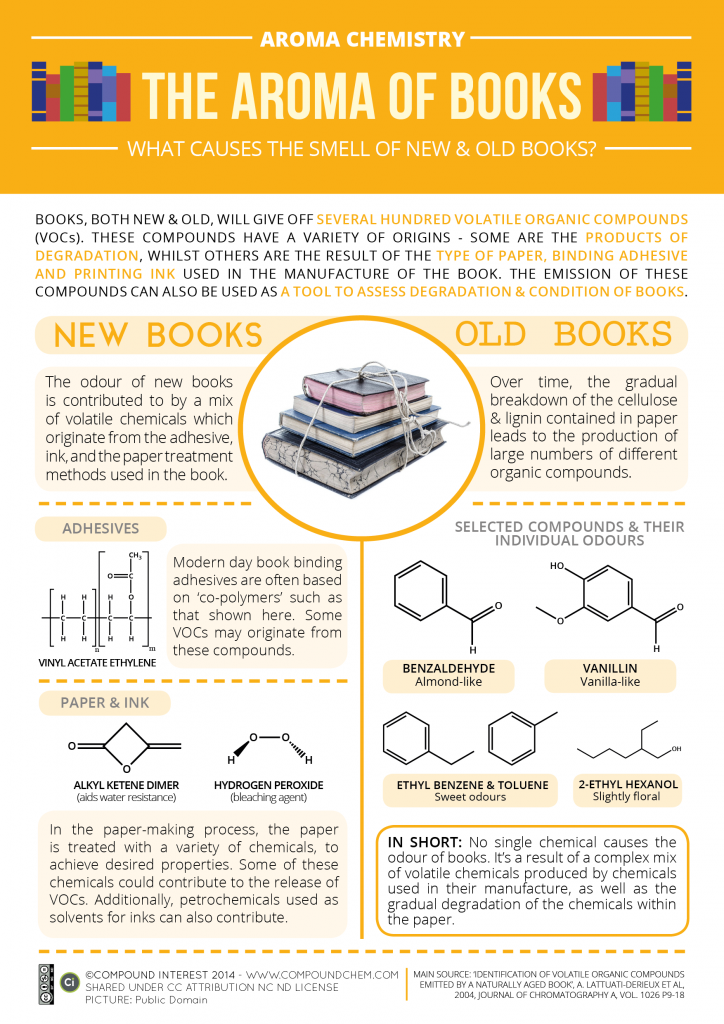