States have passed 226 abortion restrictions since 2011

Share All sharing options for: States have passed 226 abortion restrictions since 2011

States have passed 21 abortion restrictions since the start of 2014, the fewest recorded since 2011. 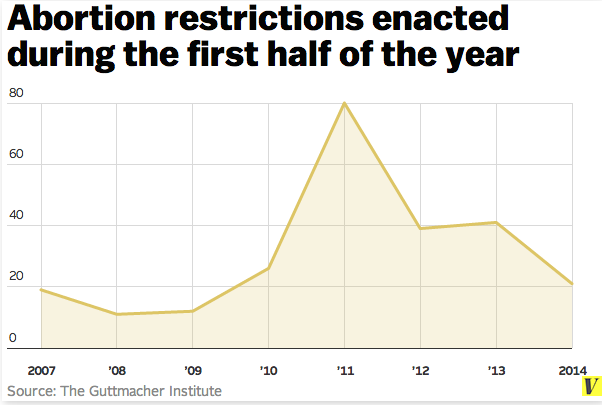 The new numbers, released Tuesday morning by the Guttmacher Institute, show a significant drop-off in state abortion restrictions since they peaked in 2011. At this point three years ago, states had passed 80 restrictions. The downward slope over the past few years suggests that the wave of laws passed in the early 2010s could be coming to an end.

At the same time, abortion restrictions still hugely outnumber laws liberalizing access. States this year have passed three laws to protect abortion services. Perhaps the most surprising state to liberalize its abortion laws was Utah, which has waived pre-abortion counseling requirements in cases of fetal impairment.

All told, states have passed a total of 226 new abortion restrictions in the last three and a half years, including the 21 added to the total in 2014.

Recently-passsed laws have reshaped the abortion access landscape. The number of states where abortion clinics are required to meet standards that other doctor offices are not — admitting privileges at hospitals, for example, or certain types of building designs — has more than doubled since 2000. 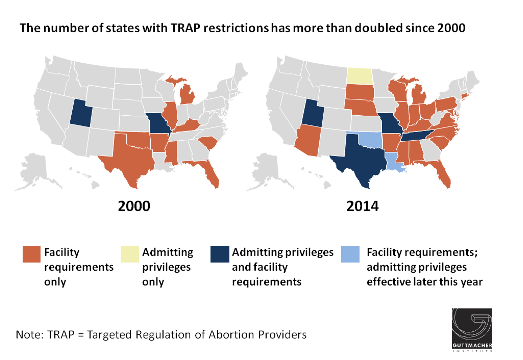 "Abortion access has changed dramatically," says Elizabeth Nash, state issues manager at the Guttmacher Institute. "The debate at the federal level affected what happened at the state level, and accessing abortion is much more difficult in 2014 than it was in 2009."