What cell phone ownership says about poverty in America

Share All sharing options for: What cell phone ownership says about poverty in America

Not too long ago, cell phones were considered a luxury or even a status symbol. Now, mobile phones are an increasingly basic necessity for Americans of all income levels. New data from the Centers for Disease Control finds that the majority of households in poverty also are cell phone-only homes — the only economic group studied for which that's true. 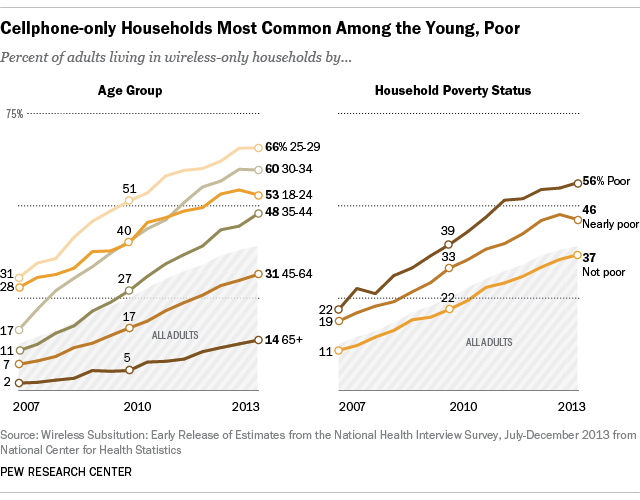 Pew breaks down the data on its Fact Tank blog, showing not only that the poorest Americans tend to be the ones most likely to be cell-phone-only, at 56 percent, but that younger adults also are generally more likely to be entirely wireless.

Of course, it's not that it's only poorer Americans who are increasingly going landline-free; the share of all income groups and age groups going cell-phone-only have generally trended upward since 2007 — today, nearly 40 percent of all US adults live in cell-phone-only homes, up from 11 percent in 2007. But the poorest Americans have remained the most likely to be cell-phone-only throughout this period, and have inched away from non-poor adults.

The data might be seen as a one reflection of the idea that the prices of luxuries like electronics have fallen off, while the prices of more basic necessities like food, health care, and education have climbed. As Annie Lowrey wrote in the Times earlier this year, the cost of cell phone service fell by more than 30 percent between 2005 and 2014, and the cost of phones and accessories (unsubsudized by providers) fell by more than 60 percent over that period.

Other factors have contributed to make cell phones even more affordable, as the New York Times reported in 2011, like the availability of pay-as-you-go plans, not to mention state subsidies for low-income people to use on their cell phone bills.

Cheaper cell phones combined with tight budgets can mean a choice when it comes to cutting expenses. As the Wall Street Journal reported in 2011, the recession may have helped hasten the move away from land lines for all Americans.