Share All sharing options for: Why it’s hard for the US to learn from other countries on education

For nearly as long as American schools have existed, Americans have obsessed about how other countries educate their kids.

The education wonks of the 19th century wanted to import the secrets of Prussia's education system. And the international-comparison mania never really stopped: In 2013, The Smartest Kids in the World, a book drawing lessons from schools in Poland, Finland and South Korea, was one of the most-discussed education books of the year.

New data on poverty, inequality and education are likely to reignite the conversation. But it's easier to point to what other countries are doing right than it is to figure out what lessons they can teach the US. That's evident in the latest education report from the OECD, a group of 34 mostly rich countries and economies.

The OECD is a big player in the international-comparison game because it tests students around the world in math, reading and other subjects. Those tests are often used as benchmarks to show that the US is falling behind.

The OECD, though, also reports on how different nations handle inequity in education. That data, like the test scores, shows the US has a long way to go.

The OECD report hammers this home. The researchers divided students into quartiles based on the parents' income, wealth, education level and occupation, then calculated the percentage of students from the bottom of the ladder nationally on status who end up at the top globally in academic achievement.

They called that success "resilience," but what they're really measuring is whether poverty is destiny. (The OECD's charts can be tough to follow. If you're looking for the US, it's well below average — sandwiched between Russia and Croatia.) 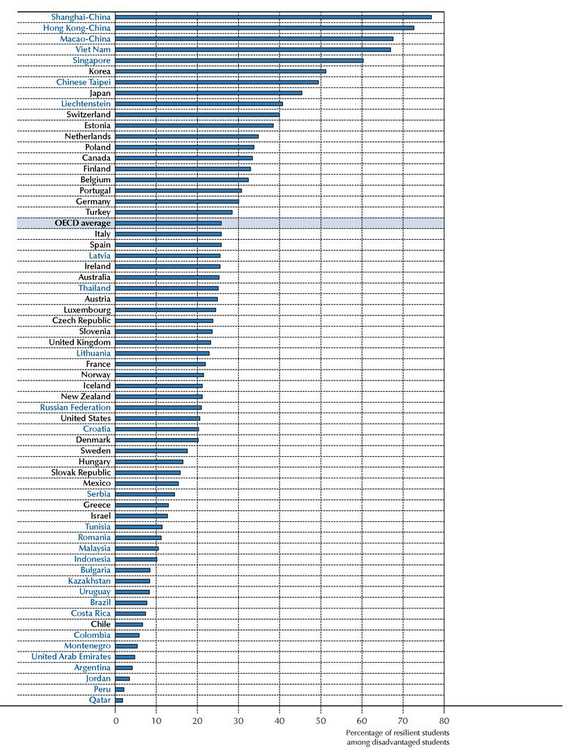 Just 20 percent of American students in the bottom quartile for socioeconomic status score in the top quartile for academic achievement. In Germany, 30 percent do; disadvantaged students have an even better shot at success in Canada, Poland and Japan.

Still, this is a tricky ranking, because it mixes a domestic measurement (socioeconomic status) with an international one (academic achievement). The US has a disproportionately low share of the top achievers, period. So it's even harder for disadvantaged students here to rise than it might be elsewhere.

One response to the fate of disadvantaged students is a common refrain: it's the poverty, stupid. Or it's the poverty making us stupid. Students from American schools serving well-off households match up well against students in other nations.

But when you isolate students by socioeconomic status, comparing like with like, high-status students in the US (the darkest blue dots on the chart below) don't look as good when compared to peers in other countries. You'll find high-status students from the US behind those from Spain and Turkey: 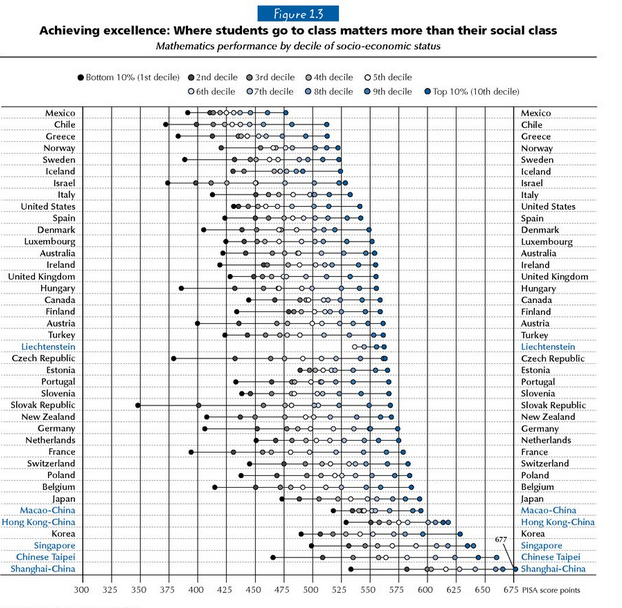 "Local control" has long been thought of as the guiding principle of American education. But a national sense of crisis has led to education reform ideas with a national sheen: the Common Core sets a shared standard in 43 states for what students should know and be able to do in language arts and math, and both the George W. Bush and Obama administrations have pushed to use statewide standardized tests to hold schools accountable.

National standards — which hold students to the same expectations nationwide but don't prescribe curriculum — aren't unusual in high-performing countries. (And many low-performing countries have them too, as others have noted.) But many nations also have more local control than schools in the US do over what's taught and how it's measured. That's particularly true when "local" is defined not as a state legislature or a school board, but as an individual school.

OECD's charts here are so convoluted that they're nearly unreadable, but this one shows that principals in the US say schools have less control over curriculum and testing than do principals in many other countries: 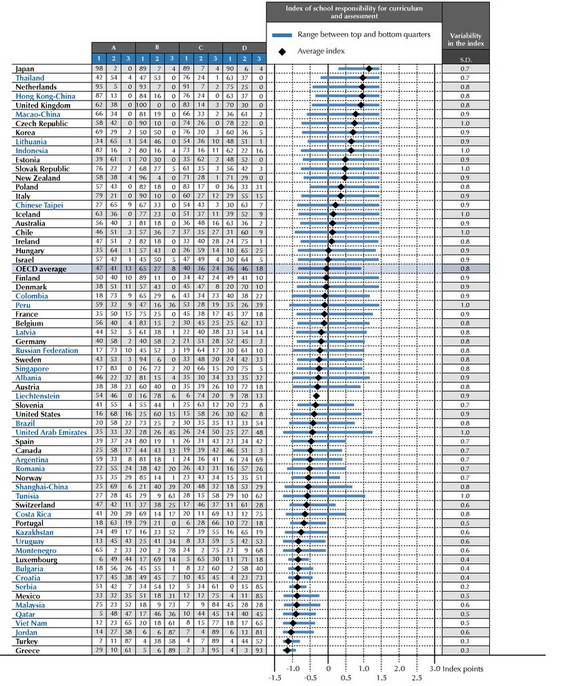 4) It's hard to tell if school choice matters

School choice — the idea that children shouldn't be assigned to a neighborhood school, but that parents should be offered different options — is broadly popular as an education reform in the US. (Some form of school choice is embraced by politicians as different as Rick Santorum, Bobby Jindal, Barack Obama, and Elizabeth Warren.)

there doesn't appear to be much correlation between choice and achievement

Students are more likely to be assigned to a school based on where they live in the US than they are in other countries. But there doesn't appear to be much correlation between choice and achievement. In Finland and Switzerland, most students aren't in schools that compete for students; in Japan and Korea, the vast majority are.

In countries with a mix, schools that compete for students performed better than those that do not in only two countries — the Czech Republic and Estonia.

It's hard to draw a comprehensive policy agenda from the OECD data. But that doesn't mean that people won't try. The problem is the lessons policymakers want to learn from high-performing nations often line up, magically, with the policy preferences of whoever is doing the recommending.

The real lesson is probably something more holistic

The best example of this phenomenon is Finland, which has nurtured a mini-industry of education junkets to show off its high-performing school system. As a result, most prominent figures in education have an opinion about what Finland is doing right and the US could do better. Teachers' unions tout its strong, cooperative unions; conservatives praise Finland's local control over education; liberals point to its robust social services and low child poverty rates; education reformers praise its high standards for would-be teachers, and so on.

The real lesson is probably something more holistic, and that's what the OECD recommends. The group comes out strongly for high-quality preschool; for higher teacher salaries and tough standards for teachers; for better coordination between teacher preparation programs and K-12 schools; and for reducing socioeconomic stratification and segregation, whether by school choice or other means. It's what could be described as an "all of the above" agenda — one that reflects the complexity of education around the world.