Share All sharing options for: Shark attacks are rising — but you're still 33 times more likely to be killed by a dog

Even though shark attacks are quite rare, they make for splashy headlines. So when a great white shark bit a swimmer off Manhattan Beach in southern California over the weekend, it set off a minor media, uh, feeding frenzy.

There have been 2,074 'unprovoked' shark attacks recorded since 1960

The attack itself was fairly unusual. The shark had been hooked by a fisherman and was struggling on the line for 45 minutes before a long-distance swimmer blundered into the scene. One lifeguard told the Los Angeles Times that the shark was just trying to bite his way to freedom. Who can blame him? (The swimmer, thankfully, is in stable condition, and the fisherman cut his line and freed the shark after the attack.)

But since shark attacks are in the news again, it's worth checking out some of the numbers on this. The Florida Natural History Museum keeps a handy record of shark attacks around the world. Here are four notable tidbits — including a crucial dog/shark comparison:

1) Shark attacks do seem to be rising over time 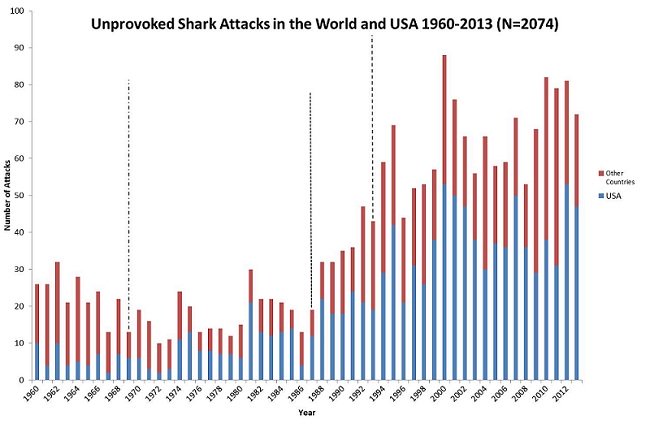 There have been 2,074 "unprovoked" shark attacks recorded since 1960 (more on that term in a second), and the number each year seems to be trending upward. That's according to the Florida Museum of Natural History's International Shark Attack File.

Thanks to conservation efforts, shark populations are rebounding

The bulk of reported shark attacks happen in the United States, and those numbers rose in the 1980s and 1990s (though they're still very uncommon, with only around 50 or less each year).

Experts have suggested a couple of reasons for the increase. First, more and more people are hitting the beaches each summer. But sharks themselves are also becoming more numerous, thanks to years of conservation efforts. One NOAA survey in 2014 found that white shark populations were rebounding in the North Atlantic. A separate 2011 study found that white sharks were becoming more numerous around central California.

A third key reason for the uptick is much more mundane — in places like Florida, better reporting systems since the 1990s mean that more and more minor attacks now get recorded, when they previously would've gone unnoticed. 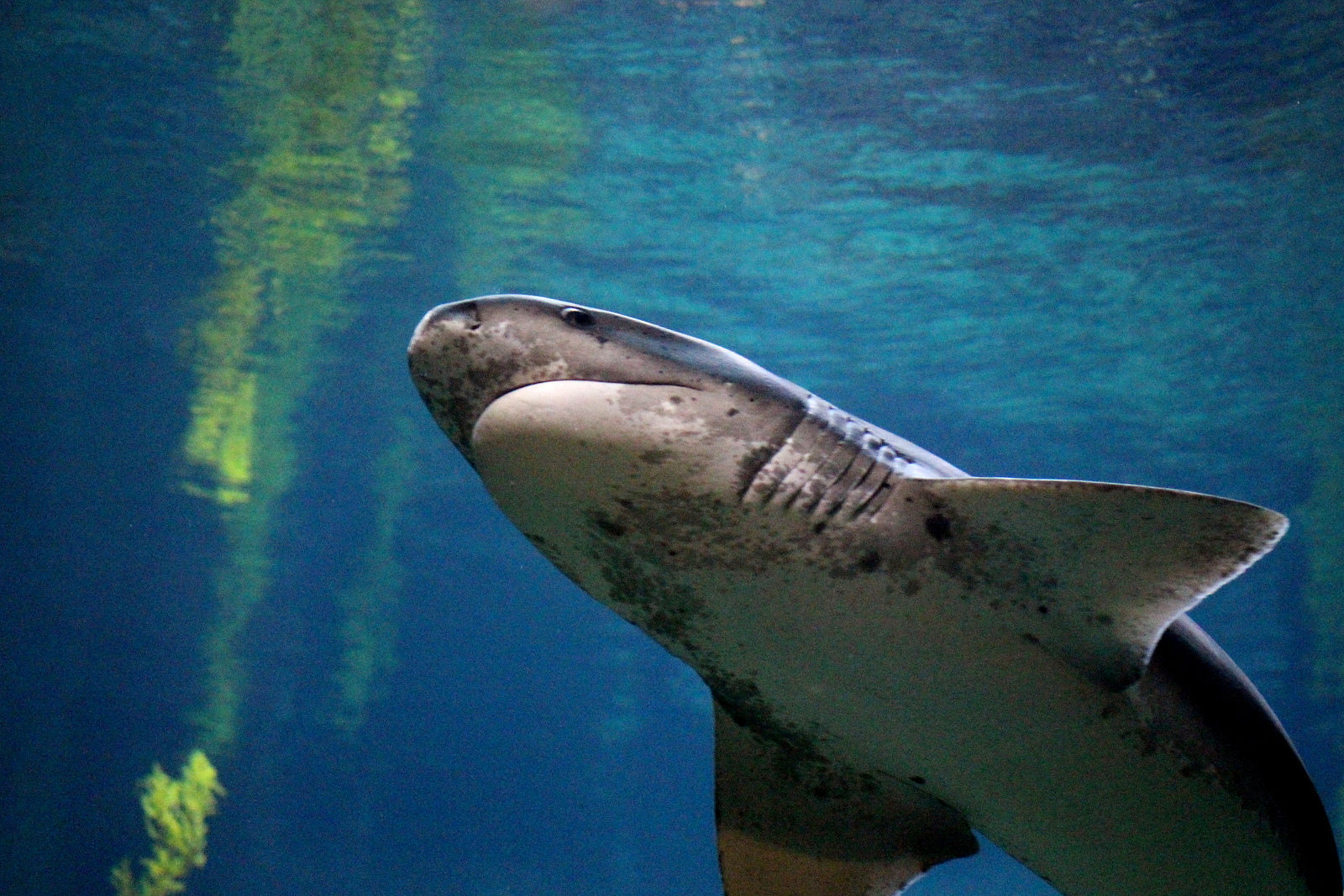 Try not to provoke the shark. kerolic/Flickr

It's worth noting that shark experts make a distinction between "provoked" and "unprovoked" attacks. A "provoked" shark attack is when humans make first contact — say, a fisherman snags a shark in a net and the shark bites his fingers off during the untangling process. Or say a diver does something stupid and tries to pursue a shark.

experts make a distinction between 'provoked' and 'unprovoked' shark attacks

"Unprovoked" shark attacks, by contrast, are when the shark strikes first. These get further subdivided into "hit and run" attacks (usually in shallow waters), "bump and bite" attacks (often on divers in deeper waters) and then "sneak attacks."

Now, since unprovoked attacks ostensibly affect innocent human bystanders, they tend to get all the attention — and the fancy charts.

But both types of attacks do occur. In 2013, there were 125 shark-on-human incidents recorded worldwide. Of these, 72 were confirmed "unprovoked" attacks — they were the shark's fault. Another 28 were blamed on humans who had provoked the shark with a boat or fishing line or whatnot. The rest were in an unsatisfying gray area: in two cases, a shark bit a dead body, in others, a shark attacked the debris of a plane crash, and in others, there just wasn't enough evidence to say what happened.

3) The majority of US shark attacks happen in Florida 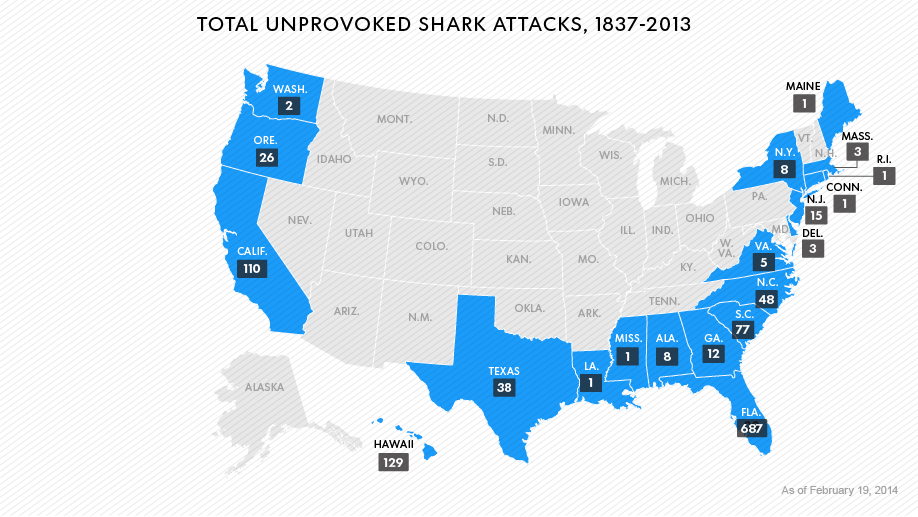 There have been 1,106 unprovoked shark attacks in the United States recorded since 1960. Of those, 664 occurred in Florida. (The map above, from USA Today, stretches back even further to 1837 — and yes, it reveals the shocking truth that only coastal states get attacks.)

What's more, a disproportionate number of attacks seem to occur in Volusia County, Florida — with 264 attacks since 1960. The Florida Museum of Natural History notes that the area "has a high number of shark-human interactions as a result of extremely high aquatic recreational utilization of its waters by residents and tourists, especially surfers." 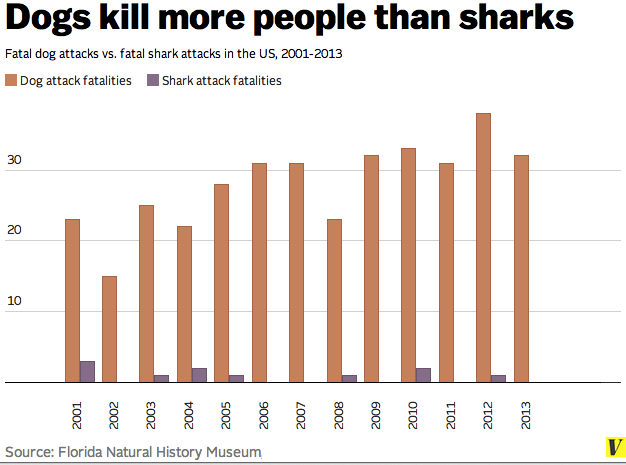 The Florida Museum of Natural History also keeps a bunch of light-hearted statistics to emphasize just how rare shark attacks actually are. For instance: lightning strikes on people have been far more common nationwide since 1959 than shark attacks have been.

Or take dogs and sharks. The Florida Museum of Natural History observes that dogs killed 364 people in the United States between 2001 and 2013. Sharks killed just 11 people in that same time period. The obligatory chart is above.

(Update: Since a few people have objected to that last chart, let's clarify — the only thing the chart is saying is that more people in the US are killed by dogs each year than by sharks. It's a way to underscore the fact that shark attacks are very rare, despite all the headlines they get. Yes, it's driven by the fact that we hang out with dogs far more often than we hang out with sharks. Yes, the average shark encounter is likely more dangerous than the average dog encounter. And no, it's not a good idea to play fetch with a shark or wrestle with a shark or pet a shark or treat a shark the way you would a dog.)

Further reading: The ReefQuest Center for Shark Research has a very good essay on the varieties of shark attacks.