No one’s less moderate than moderates

Share All sharing options for: No one’s less moderate than moderates

There is no creature more revered in American politics than the moderate voter. Unlike the ideologues and partisans destroying politics, the moderate is free of cant and independent of party. She yearns for politicians who get along, who govern reasonably and incrementally, who steer a course between the extremes of the left and the right. The problem with Washington is that her pleas so often go unheard.

The only problem is moderates are largely a statistical myth. When you dig into their policy positions, the people who show up as moderates in polls are actually pretty damn extreme — and efforts to empower them may, accidentally, lead to the rise of more extreme candidates.

The statistical mistake behind the myth of the moderates

What happens, explains David Broockman, a political scientist at the University of California at Berkeley, is that surveys mistake people with diverse political opinions for people with moderate political opinions. The way it works is that a pollster will ask people for their position on a wide range of issues: marijuana legalization, the war in Iraq, universal health care, gay marriage, taxes, climate change, and so on. The answers will then be coded as to whether they're left or right. People who have a mix of answers on the left and the right average out to the middle — and so they're labeled as moderate.

"These people look like moderates but they're actually quite extreme"

But when you drill down into those individual answers you find a lot of opinions that are well out of the political mainstream. "A lot of people say we should have a universal health-care system run by the state like the British," Broockman said in July 2014. "A lot of people say we should deport all undocumented immigrants immediately with no due process. You'll often see really draconian measures towards gays and lesbians get 16 to 20 percent support. These people look like moderates but they're actually quite extreme." 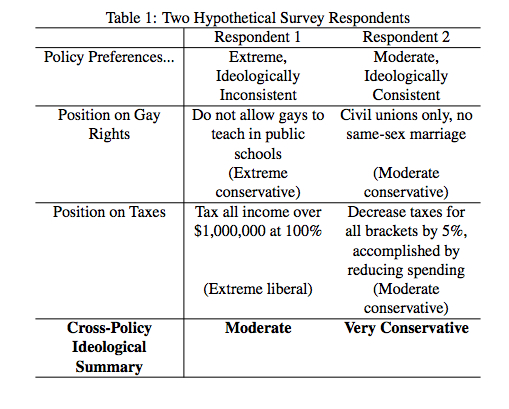 Digging into a 134-issue survey, Broockman and coauthor Doug Ahler found that 70.1 percent of all respondents, and 71.3 percent of self-identified moderates, took at least one position outside the political mainstream. Moderates, in other words, are just as likely as anyone else to hold extreme positions: it's just that those positions don't all line up on the left or the right.

For Ahler and Broockman, this solves a puzzle. They note that many states have implemented election reforms to wrest the process away from partisans and empower average voters to elect the moderate politicians they really want. These reforms include open primary elections, nonpartisan redistricting, and public funding of elections. But "the bulk of studies on these reforms finds little evidence that they improve moderate candidates' fortunes."

The answer, Ahler and Brookman realize, is simple: these voters don't want moderate candidates because these voters aren't actually moderates.

What moderates want is often extreme

There's even reason to believe "average voters" — which is to say, less politically engaged voters — hold more extreme opinions: engaged Democrats and Republicans tend to adopt the positions held by their parties, and parties tend to adopt positions that are popular, achievable and workable. So voters who follow their parties end up pushing ideas in the political mainstream. Voters who aren't as interested in politics and who don't attach themselves to a party push the ideas they actually like, irrespective of whether they're popular or could attract 60 votes in the Senate or would be laughed at by policy experts.

The other problem is that the term "moderate" makes it sound like there's one kind of moderate — which is where the idea emerges that there's some silent moderate majority out there waiting for their chance to take back politics. But someone who believes in punitively taxing the rich and criminalizing homosexuality is not going to form a coalition with someone who believes in low taxes and gay marriage, even though both of these voters would look moderate on a survey.

The deeper point here is that the idea of the moderate middle is bullshit: it's a rhetorical device meant to marginalize some policy positions at the expense of others. There's no actual way to measure it, or consistent definition animating it, and it doesn't spontaneously emerge in any of the data.

"Moderate" as a political weapon

In one of their paper's most interesting sections, Ahler and Broockman look at the results of a survey that gave people seven policy options that ranged from extremely liberal to extremely conservative on 12 different issues.

"On only two of the 13 issues — environmental/energy policy and gay rights — is the truly centrist response the modal preference," they write. "This equals the number of issues on which the modal preference is one of the outside-the-mainstream policies."

On marijuana, the single most popular position was full legalization. On immigration, it was "the immediate roundup and deportation of all undocumented immigrants and an outright moratorium on all immigration until the border is proven secure." So are these positions really the moderate ones? Or is the moderate position discovered through some process of averaging out the poll results? Or is the moderate position just the one espoused by people in power — because, after all, that's where a lot of survey respondents are taking their cues from.

"When we say moderate what we really mean is what corporations want," Broockman says. "Within both parties there is this tension between what the politicians who get more corporate money and tend to be part of the establishment want — that's what we tend to call moderate — versus what the Tea Party and more liberal members want."

That's the problem with using a term that doesn't describe either an identifiable group of voters or a clearly defined ideology to describe policies. "Moderate" is simultaneously one of the most powerful and least meaningful descriptions in politics — and it's become little more than a tool the establishment uses to set limits on the range of acceptable debate. It's time to get rid of it.